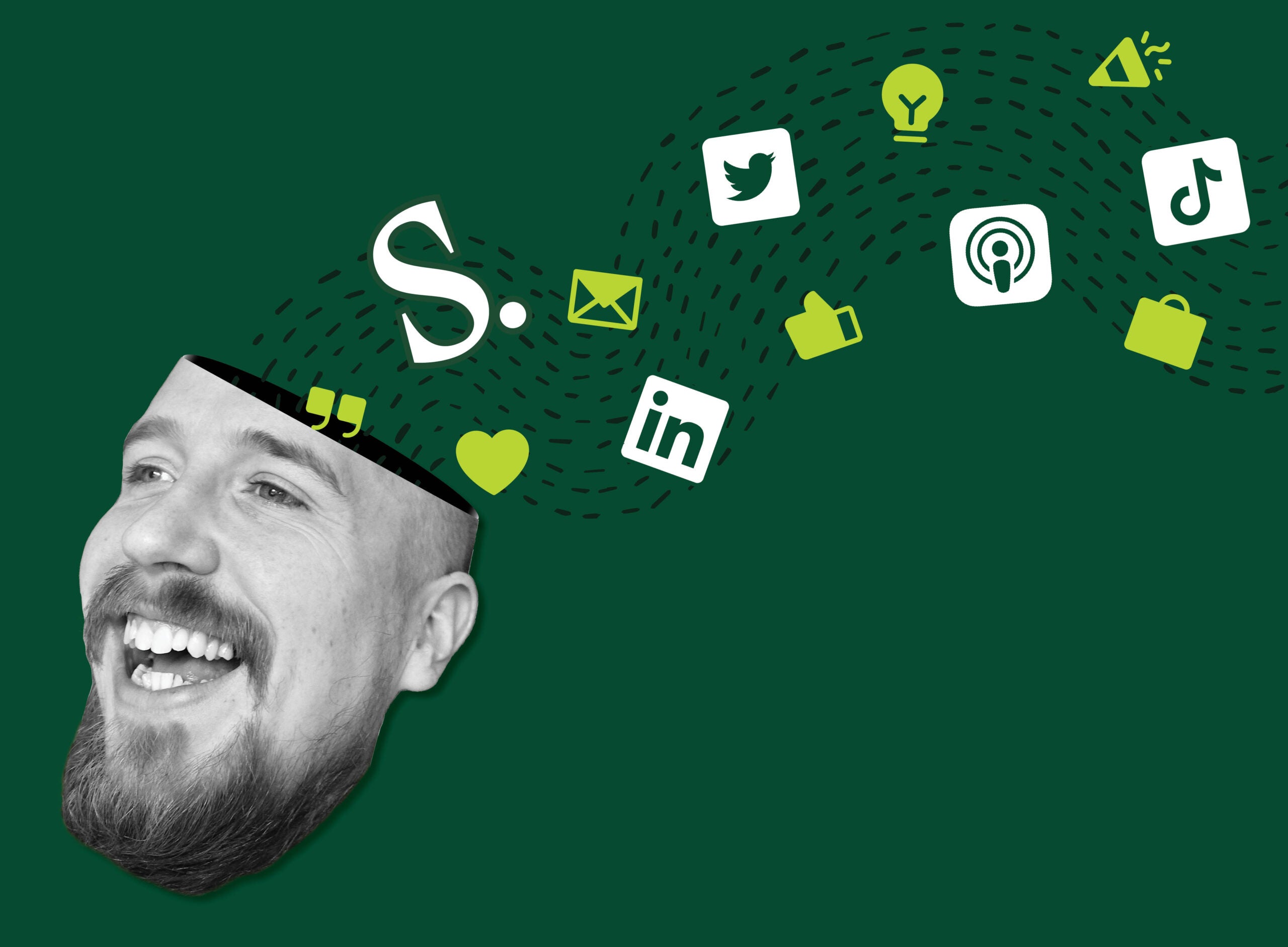 In 2019 I really needed social selling secrets. That’s when I began building my personal brand on LinkedIn.

I’d not created any sales content previously but what I lacked in experience I more than made up for in enthusiasm.

I knew that content creation was going to be a pivotal part of my success. However, my early posts didn’t perform very well at all.

The engagement was really low. I wasn’t making content that resonated with my prospects and as result, it didn’t perform well.

I certainly didn’t call myself an influencer back then. Far from it.

I knew that there was an opportunity to make content that salespeople would love.

Three years later, I’ve built a personal brand on LinkedIn that speaks to the sales community. I’ve gained a following on the platform that has helped me hit my sales targets and most importantly of all I’ve found my voice.

And as a result, my content is now reaching more people than ever!

One of my most recent videos on LinkedIn gained 600,000 organic impressions, had thousands of reactions and hundreds of comments from the sales community. And that single piece of content drove 3,000 views to the Salesloft website.

(And I didn’t actually say a single word in the video!)

That’s the power of social selling.

If you get it right you can have a huge impact on your audience, help drive your own personal brand and impact your organisation.

So here we are. I’m now sharing my social selling secrets.

Secret #1: Start thinking of yourself as a content creator.

Be consistent by posting weekly.

My goal when I started was to post one video a week. Even on weeks when I didn’t have ideas, I made sure I put something out because I knew that showing up was important. I also got comfortable with knowing that I was going to make mistakes. Getting content wrong is a huge part of the process. It helps you understand how to get content right.

I would love to just create video content, but the algorithm is not as friendly to video content as I would like. So I utilise text, images, GIFs and newsletters as part of my strategy. As soon as I started varying my content, I saw a huge spike in engagement.

When I started making content on the platform, I didn’t have a voice. So I made the kind of content that I thought I should be making, rather than the type of content that I actually wanted to be making. Things changed for me when I stopped trying to be a sales influencer and just actually started creating content that was entertaining. I started enjoying myself, and my audience reacted to that in a big way.

Add value for your audience.

My early content was all about myself and the benefits of Salesloft. I didn’t give a lot of thought to the actual person viewing my content. The social selling secret I learned was to keep the audience in mind at all times. I ask myself questions like: Will my audience laugh? Will they be prompted to join the conversation? Is this the kind of content that would stop me from scrolling?

There’s nothing wrong with being inspired by high-performing content. If you’re struggling to think of content ideas follow relevant hashtags on LinkedIn. Explore the content that is doing well and if you can create something similar in your own style, give it a go!

Take Action: Jump into the activity section of your LinkedIn profile. Look at the last 10-15 pieces of content that stopped you from scrolling. That’s the kind of content you should be creating.

Your engagement strategy is just as important as your content strategy.

If all you’re ever doing is creating your own content, it’s like going to a networking event, shouting your opinion from the corner of the room but then not listening to what anyone else has to say.

There’s no way you’d go home from that event and think you’d done a great job of networking.

It’s the same on LinkedIn. And I was guilty of this in the beginning. I focused on making funny videos, thinking I did a great job when they performed well. Now I focus just as much on engaging with my audience.

Engagement can’t be an afterthought. The effort that you put into the interactions you’re having with your audience on the platform should equal the effort you put into your content creation.

And have the confidence to start conversations on other pieces of top performing content. If you comment on 10 viral posts a week and a couple of them you include your own content, you will see a spike in views, engagement, connections, etc.

Take Action: If it is relevant to the conversation, I will put my content in the comment section of other people’s high-performing content. It is a great way to reuse content and give it new life.

Secret #3: Give prospects a reason to connect on LinkedIn.

An accepted LinkedIn connection is the holy grail. Being connected with your prospects opens up opportunities for you to engage with them directly. But to get to that stage, you have to show them you’re worth it.

These three tactics work really well for me:

Everyone likes a compliment. And there’s something quite powerful in sending someone a connection request which references and praises content they’ve created. Something as simple as telling them, “I saw this and I thought it was fantastic – here’s why” can be highly effective in prompting your prospect to connect with you.

Sending a personalised connection request is always a good idea. But you only get one shot. So it’s got to be great. Ask yourself: Have I made this request as personlised as possible? Something as generic as “I’m interested in your company because…” just doesn’t cut it anymore. Instead find out as much as you can specifically about your prospect’s interests and use that information to craft a connection request.

My social selling secret is to give them a reason to click accept.

Nobody likes to be sold to. And a lot of sellers are connecting with prospects on LinkedIn to do exactly that.

Here’s an example of how I’d send a connection request on LinkedIn: 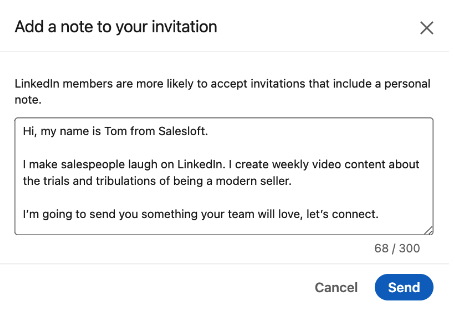 I know that not everyone can say they are making people laugh on LinkedIn. But, this goes back to aligning your messaging with the personal brand you’ve built through the content you are creating. Maybe you say, “I share facts and figures that are important to sellers” or “I’m working on sales thought leadership content on LinkedIn.”

The important thing is that you’re adding value to your prospects. You’re giving them a reason, beyond just wanting to sell to them, to connect with you and be a part of your network.

You increase the likelihood of connecting with your prospects, which means you expand your network and you’re more likely to book meetings.

Connecting with a prospect and pitching them straight away.

As soon as they accept the connection, you’re so excited –  giddy even – and you want to share with them the value of your offering and pitch them right away.

But LinkedIn messages need to run alongside the prospecting process. Use your message to direct them to a specific step in your cadence. For example: Send a DM and ask if they received the video you sent a couple days ago.

See how a sales engagement platform can improve your prospecting.

You’re not selling in the DMs, but you are referencing that there is a sales process going on.

I personally love a LinkedIn voice message. There’s something so intriguing about a voicenote. I’ve listened to every single one I’ve ever received. Voicenotes are underused by sellers, which makes them a social selling secret. Use them to help your message be heard by your prospects.

Take Action: In EMEA, video messages are VERY successful. Ellie Twigger became known for immediately stopping what she was doing when someone connected and grabbing her phone to record a  “hello” video to share.

Secret #5: Don’t try to book meetings on your LinkedIn content.

It’s so tempting, especially when a piece of content is performing really well, to want to take advantage by adding your meeting link.

Every time I did that, I got zero engagements.

I would write something really valuable for sellers and then say “If this sounds good, let’s have a conversation – to book click here.” I quickly learned this is the opposite of social selling. Rely on the cadence you are running to book the meeting. If your LinkedIn post is good enough, you’ll know because they’ll reference your content on the next cadence step.

Similarly, if a prospect is only responding to you on LinkedIn, it is NOT an invitation to send your meeting link. Use the opportunity to direct people to a voicemail you’ve left or to a video you sent. Keep all your messaging on LinkedIn lighthearted and friendly.

Secret #6: Done is better than perfect.

There’s no such thing as perfect. A lot of sellers I talk with spend hours rewriting sentences and never actually post anything.

You just have to start.

Spelling mistakes will happen. It’s social media at the end of the day – it’s not on the front page of the corporate website. You can always edit it (I find that the algorithm doesn’t mind editing and it doesn’t impact how people view the content). 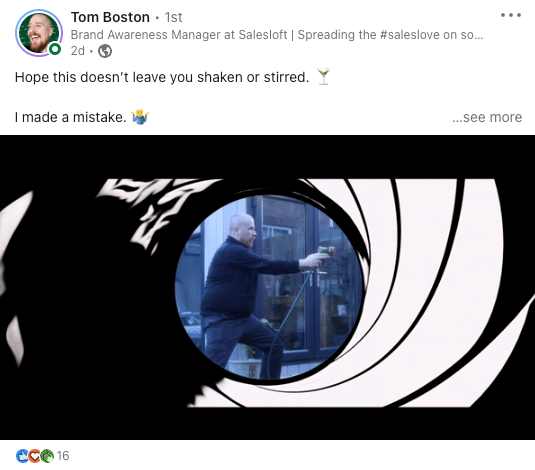 High view numbers will come with time. When I started I would get really caught up feeling like posts were not performing as well as I’d like. My first piece of content only had two comments and they were both from my colleagues at Salesloft. It would have been easy to pack it in and think that nobody cares.

There’s no such thing as a perfect post. Just try to learn something from everything you post, even if it doesn’t do very well.

Take Action: You can’t be consistent if you are deleting content, so don’t delete your under performing posts.