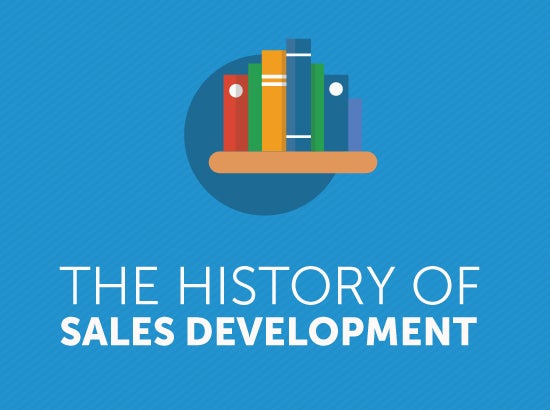 The History Of Sales Development

Sales development isn’t a new strategy. But it is one of the biggest shifts in how successful technology businesses are approaching sales.

Since its inception over 30 years ago, sales development has evolved along with technology and processes. While its roots are still centered around the role of prospecting, today’s reps use different techniques for success more than ever.

Let’s take a look at how sales development has evolved over the past three decades:

The first example of sales development that we could find, came from the comments section of David Cumming’s recent blog post. Its basis was a lengthy exploration of sales development, written by one of our favorite thought leaders, Craig Rosenberg.

Craig mentions that his mentor, Stu Silverman, founded a business around the sales development process in 1984.

And it wasn’t the only business to incorporate this strategy.

Oracle implemented a sales development team in the early 1980’s and was one of the first companies to use it to fuel a billion-dollar business. And before founding Salesforce.com, Marc Benioff got his start at Oracle working under Anneke Seley.

In the beginning, the strategy was simple – hammer the phones.

Reps would build lists of prospects, call as many as possible, and try to track their calls in CRM.

Businesses recognized the challenges of taking time to punch in phone numbers by hand, so they automated the process, giving rise to power dialers.

Live conversations were the name of the game and any way to improve the consistency of getting a prospect on the phone was gold. Predictive dialers allowed reps to reach out to multiple prospects at once and be put in touch with those that answered their calls.

Technology increased efficiency, but the premise was always the same: get prospects on the phone.

Aaron Ross implemented a sales development team at Salesforce.com that wasn’t centered around calling. He wrote about his “email first” strategy in the book Predictable Revenue, which immediately took off.

The premise was simple – salespeople shouldn’t waste their time prospecting.

Instead, SDRs would focus on using a combination of email and phone to engage prospects.

Ross mainstreamed the idea of having teams focused specifically on prospecting new business before passing it on to closers. This specialization would, in turn, let salespeople focus entirely on closing business interested prospects, making the entire sales process more efficient.

Aaron is currently coupling with Jason Lemkin on the Predictable Revenue Guide To Tripling Your Sales, that includes specific tools and case studies around sales development.

SDRs use a heavy blend of email and phone, combined with detailed cadences defining when and how to reach out to prospects. The balance of phone vs. email differs on a company basis, depending on their ideal customer. But the idea is the same – use both phone and email to connect with more prospects.

Sales development is also picking up steam on the executive level.

They’re one of the fastest growing private software companies in North America, growing their new business pipeline by 75% in the first year after implementing a sales development team.

By putting resources and attention into these teams from the top down, businesses hire outstanding reps who can punch above their weight class and set qualified appointments and demos.

With the shift to specialization comes the need for better tools.

Technology that includes accurate information and has the ability to target specific companies and locations is gaining popularity because sales development teams need a steady stream of prospects to engage.

Companies like the Bridge Group Inc, whose reports drive best practices, are helping support fine-tuned process by delivering data on how to improve the strategy.

Teams can now test whether to send emails at 1 p.m. vs. 2 p.m. or determine when to leave voicemails. By having access to data, they can make their outreach strategy even more effective.

Visit Salesloft.com to learn more about sales development and how to find accurate and targeted lists of leads.