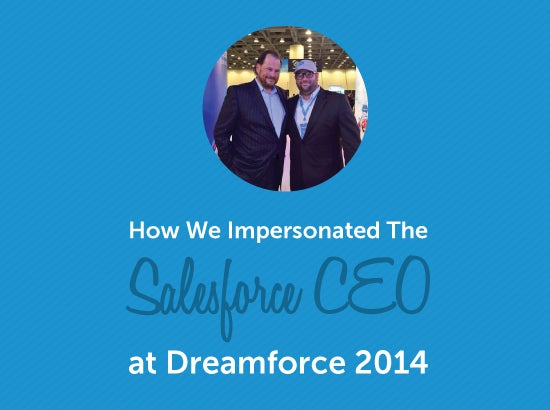 This is a play-by-play account of how Salesloft took one of the biggest branding risks at the largest tech conference of the year. And how it exploded into a marketing hack that left salesforce.com executives scrambling.

We Thought Of Everything

Going into the largest software conference in the world, we knew we had to do something to stand out among some of the best marketers and sponsors. After hours of racking our brains and many stupid ideas, Kyle Porter and I finally stumbled upon the idea of taking a Marc Benioff lookalike with us.

It’s impossible, bogus, and will never work. That’s what we thought.

But we did it anyway.

Where on earth were we going to find a Benioff look-alike?

We took to Craigslist with an ad we were certain would pique interest in the Valley. We heard back from a talent agent who basically said no way in hell – maybe an Elvis impersonator, but Benioff is out of the question. 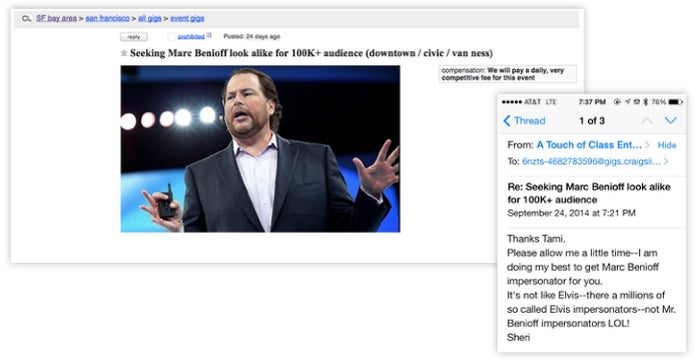 We persisted in our pursuit and emailed the Craigslist post to our team. Immediately one of our top sales execs wrote back…

The headshot sold us on how similar he looked to the original. We reached out and within days we had secured the commitment, booked flights and began working on a game plan.

The Days Before Dreamforce

We knew we couldn’t half-ass our way into Dreamforce.

Fortunately, Cam had taken theater classes and began studying Benioff’s mannerisms on film before the conference. We got the shoes, the suit and we were hellbent on making a splash in San Francisco.

We’re Leaving Our Home In Georgia, Headed For The ‘Frisco Bay…

Touching down in San Francisco, we still weren’t 100 percent certain of our game plan but knew that it would either be a raging success or swept under the plushy tradeshow carpeting. 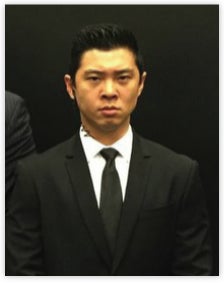 But we needed a bodyguard.

Cue Salesloft Director of Sales, Anthony Zhang, decked out in a black suit and headpiece.

We made headphones for Anthony so it would look as realistic as possible…and he never once broke character!

Benioff is balding pretty badly, but Cam has a full head of hair so we got him a hat from Pardot/salesforce.com to build his guise. 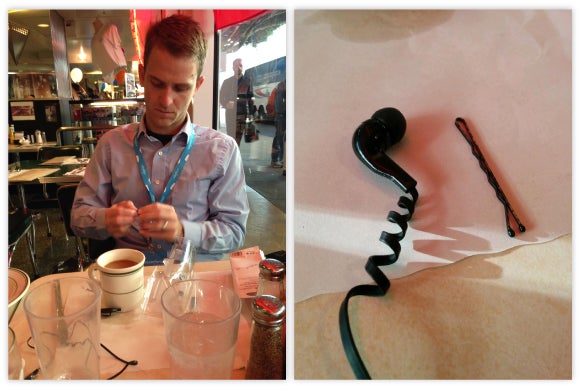 It was high time to begin the buzz.

We took a photo of Benioff, added several filters and asked our friends at Rivalry to work their magic… 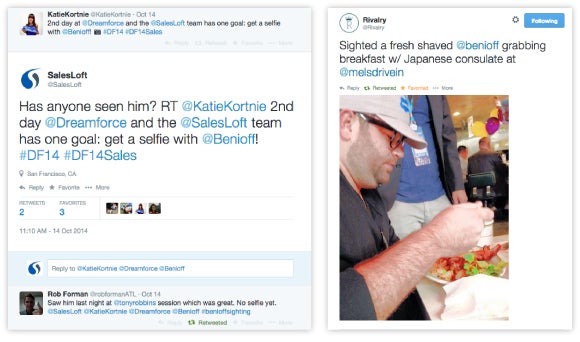 It’s Ready To Go Time, If Not Showtime

We hit the streets – I acted as the publicist to navigate the schedule and meet-and-greets and Anthony directed the way as the bodyguard. 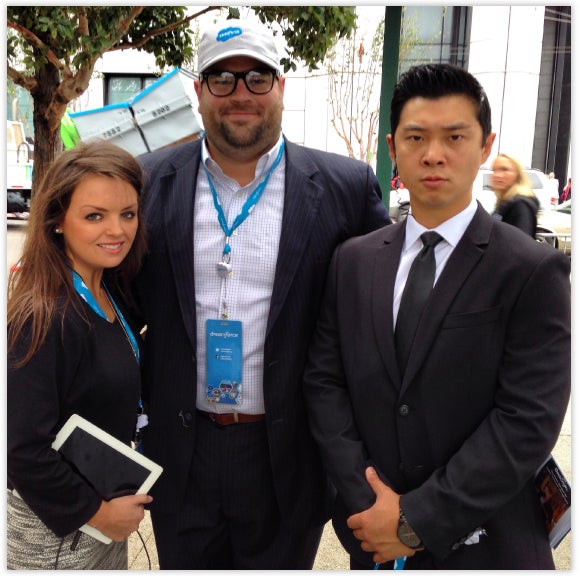 Shaking nervously like a leaf on a tree in late fall, we headed toward the quad area to gain initial traction. Heads started turning, whispers of, “Is that Benioff?” started circling and people started shouting, “Benioff, I love working for you!” Gaining ground, we greeted attendees and thanked volunteers… 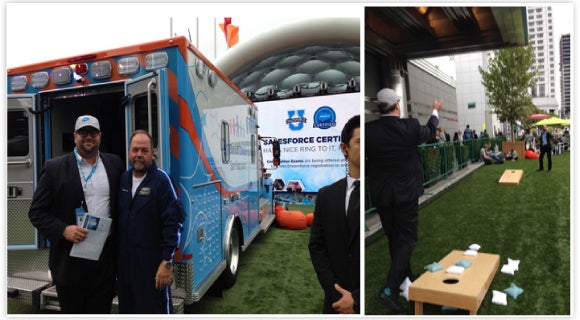 Benioff joined a game of cornhole, sat on the beanbags and asked attendees how they were enjoying their lunch, and rode in a sponsored pedi-cab. 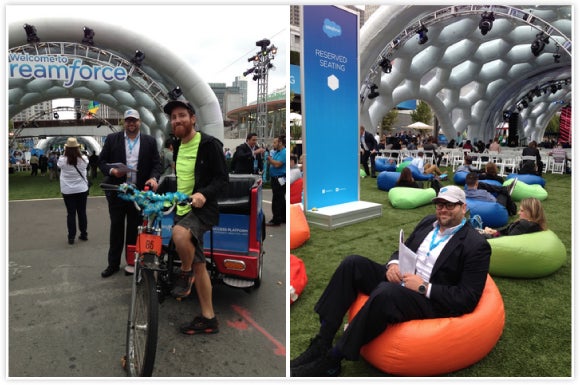 By now the buzz was electric.

To spur the intrigue, we quickly moved into the North and West Moscone Halls to greet sponsored booths and attendees.

We stopped at the Developer Zone and asked engineers what they were working on, before being swarmed for selfies.

We were blown away at how much people believed it. 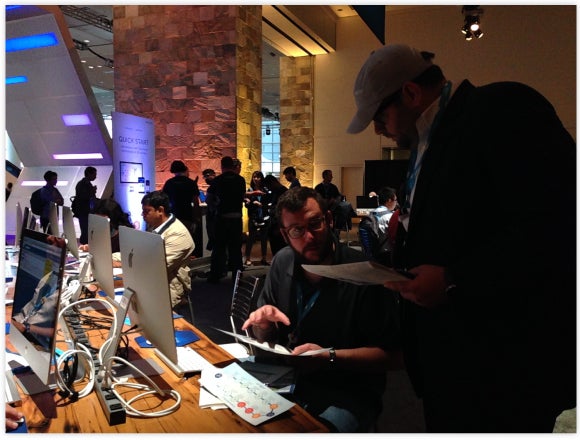 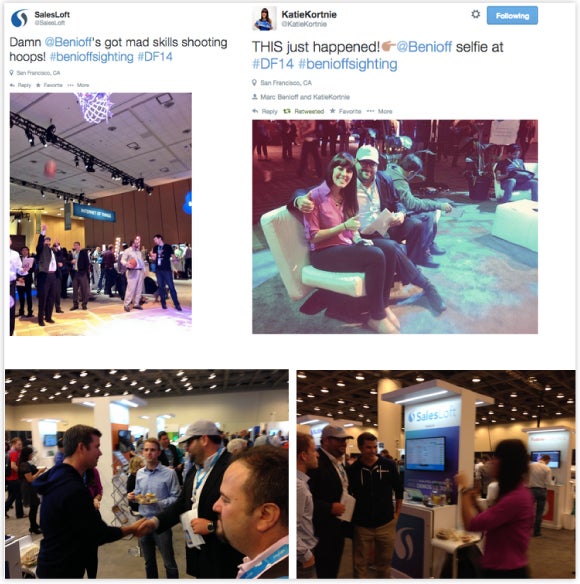 And the Influitive crew hosted a red carpet interview with Benioff…

The same nervousness swept over us the following day and we accidentally walked across the quad area, where the real Benioff was conducting an on-camera interview. Benioff’s bodyguards quickly steered us in the opposite direction.

We knew at that moment that they knew, and it was likely over.

We headed toward the Salesloft booth to regroup but noticed the real Benioff conducting interviews in the nearby Customer Success Cloud exhibit, across from our booth.

We got closer and within seconds his bodyguards came toward us and said, “Mr. Benioff saw the Craigslist ad, we know who you are and what you’re doing. Do not rush Mr. Benioff, we will bring him to you.”

With that, the official photographer and Elizabeth Pinker, SVP of Strategic Events at Salesforce.com greeted us and we briefly shared our strategy. Elizabeth mentioned they had enjoyed watching the events unfold and that it was a brilliant move to make on this stage.

It’s a pleasure to meet you. I hear you have been doing press interviews and photoshoots on my behalf. You’ve taken a weight off my shoulders, thank you.

We took photos and had a great conversation right in front of the Salesloft booth which generated a lot of publicity. Kyle and other members of the leadership team got to meet him and represent our company, and prospects approached our booth excited that we were able to get Benioff to visit us.

To say the least, we’ve been on a perma-high for the past several days!

What would you attempt to do if you knew you couldn’t fail?

Get the latest insights and updates delivered right to your inbox.