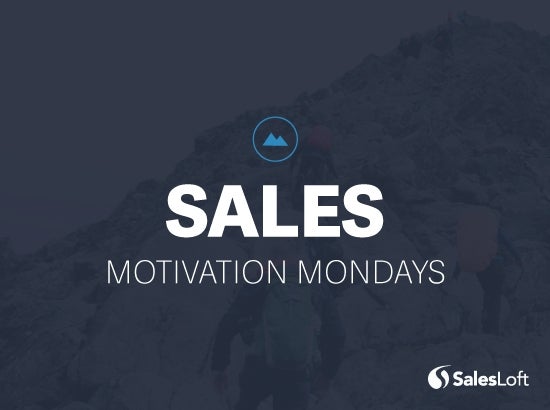 Sales Productivity and the Power of Essentialism: Sales Motivation Monday

Sales productivity is an ongoing battle for the modern sales professional. The lost art of prioritization has been eclipsed by the glorification of “busy,” and we’ve gotten caught in a constant state of hustle. And in a world where the evolution of technology was meant to provide more time in the day, that returned time has instead been filled with more and more things to do.

It’s like the concept of a retail sale. Theoretically, if I go to a store for a shirt, with a particular budget in mind, and said shirt happens to be on sale — the smart thing to do would be to celebrate the saved cash and walk away with the single shirt, right? Unfortunately, the opportunist in all of us ends up saying, “well if it’s on sale, I might as well get two,” and thus, the pocketed coin is forfeited to the desire of having more.

This idea of the “more is more” mentality is what’s plaguing the sales productivity of the modern leader. That’s why Greg McKeown’s book, Essentialism: The Disciplined Pursuit of Less, is the perfect practice for the rep looking to prioritize their sales productivity.

You cannot overestimate the unimportance of practically everything.” – John Maxwell

In college, I was a part of a club where the president sent regular emails, consistently leading her subject lines with the bolded word, “IMPORTANT,” unfortunately rendering every single email that she sent unimportant. That’s because if you’re truly considering the meaning of the word important, then you’re considering it’s value to be above all else in it’s category. And if everything is important, then nothing is important.

But as a modern sales professional, it seems to be that everything is of equal importance. Whether it’s making the most calls, sending the most emails, entering activities into CRM, attending meetings, or accomplishing all of the other minutiae that falls under your task list of a typical day, it feels nearly impossible to prioritize.

Thankfully for us, the eternal opportunists (read: non-essentialists), there’s this beautiful little two-letter word: no.

I know, I know. “No” is pretty much the most taboo word in sales. But I’m not talking about saying no during a deal, but instead in the context of prioritization and sales productivity. In this scenario, the word no may prove to be the most powerful word in a sales rep’s lexicon.

Half of the troubles of this life can be traced to saying yes too quickly and not saying no soon enough.” – Josh Billings

Say you’re behind on your numbers for the week, but you’ve been asked to take on a new responsibility within the team. This new responsibility could mean great things for your career, and saying yes could provide you an opportunity to learn, a chance to show your chops at a new skill, or even a shot at that promotion you’ve been vying for all quarter. But it would mean a further drop in your sales productivity, risking your odds of falling even further behind.

While it’s tempting to say yes, no matter the cost, it might not always be the best answer. “I’ll make it work,” we say, but have you ever stopped to consider that maybe saying no is the better option?

The law of time is unconditional: we all have the same amount of hours in a day. And maybe some of us spend that time differently, but the displacement of one activity when you introduce another is an inevitable fact that we, the on-the-go-hustlers, love to ignore.

Now, this isn’t to say that doing more and working harder is a bad thing. Here at Salesloft, the self-starting mentality is a foundational building block of every single person in the company. But the maturity of knowing how to manage time appropriately, and how to elevate real priorities, is the mark of a true sales leader.

Consider McKeown’s tie-breaker: “If it isn’t a clear yes, then it’s a clear no.” In other words, if you’re not certain that it’s a priority, then it must not be one. And things that aren’t high-priority shouldn’t be treated as such.

It’s a busy time of year for any SaaS sales rep. With Dreamforce right around the corner, this is the time to be setting appointments and preparing cadences, and it may seem like every single thing is important. But in all of the chaos of planning for the event, and gearing up for a week full of networking and elbow-rubbing, take the time to consider the power of essentialism.

Your sales productivity relies solely on your ability to work smarter rather than harder. I urge you in the coming weeks to take the opportunity to evaluate your daily tasks, really decide what it’s going to take for you to be successful, and execute on high-quality activities rather than high-quantity. Odds are, by the time you’re on the plane to San Francisco, you’ll be feeling much more zen than zany, and that attitude will show through to each of your prospective clients.

If you’d like to learn more about the exciting happenings over here at Salesloft, give our sales team a call, or come see us at our booth at Dreamforce 2016. We’d love to have you! (Hint: this, you should say yes to.)