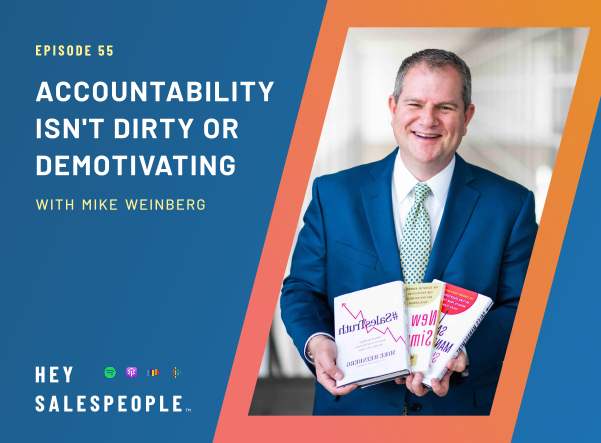 If sales is an art, Mike Weinberg is a true artist.

Mike is a selling expert who has written multiple books on the art of sales. He has walked the walk throughout his career in roles such as VP of Sales, Director of Sales, and Regional Sales Manager.

Known for his bluntness, Mike covers a lot in this Hey Salespeople episode, including what constitutes sales management malpractice, the thing he’s constantly reminding sales leaders of, and why Gary Vee’s message in content may not be applicable to the average B2B salesperson.

Jeremey: I‘m going to read something from your book. And let’s take that as a jumping-off point. I’d love to hear how people have reacted to that.

So here’s the quote, “Unless you can find sellers in similar roles having tremendous success from creating and publishing their own content, I would be highly skeptical you’d be well served following that route.” Can you elaborate on that position and how people have reacted?

“Unless you can find sellers in similar roles having tremendous success from creating and publishing their own content, I would be highly skeptical you’d be well served following that route.”

Mike: Let me start with this. I’m from the northeast like you. And I’m blunt and direct and I often will write in extremes or even when I’m teaching make extreme statements to make a point.

So we’ll start with that as the premise and I wrote that in reaction to some of the absolutely dogmatic over the top statements that I’m seeing from a lot of today sales experts who tell salespeople not only are you stupid, and we should make fun of you for using traditional methods like picking up the phone.

In fact, instead of doing that you would be much better served by creating your own IP, and publishing your own content, that that would draw you more leads and be more effective than you actually picking up the phone and, and chasing people on a strategic target prospect list.

And while I will come off like a hypocrite saying this – and I was very clear in the book that I fully acknowledge that most of my business comes from putting out content – I drew a very clear distinction between the typical business to business salesperson working in a company and someone who’s an independent author consultant who gets paid for his IP and you know, is a writer.

I love that you brought this up first, like, why don’t we just jump right into the deep end of the pool, but my biggest concern is people preaching that what’s old is dead and only what new works.

Some guy overseas said it a couple of weeks ago, he quoted Gary Vee and played a little clip from Gary V’s video, you know, and Gary dropping his F-bombs and wearing his ski cap in the middle of the summer. I’m not making fun and the guy’s brilliant and has got a huge following, but I’m just not sure how applicable his message in content is for the average B2B salesperson.

But Gary said you can put out 100 pieces of content a day. And this guru, sales guru, was saying see, see I told you, like, you know, the phone’s dead you need to do that. And my argument is A: I’m not sure I see a lot of proof that that actually is what top producers in industries that I serve are doing, and I’ve got clients in the defense, big data, big trucks, big distribution, like it’s a pretty wide gamut.

I don’t see Top Producing sales to put on content. That’s number one. And I’ll give you number two, and I’ll let you respond cuz I’m, I’m curious about some of the reaction that you’re seeing.

Most salespeople are not the best writers. It’s not their best gift. And I think there’s a lot of danger in telling people that they have to do something that they’re not necessarily good at. And then there are many, many companies in highly regulated industries where it’s not so simple for a salesperson just to put out a blog post or a significant article, because there are compliance issues, and there are legal regulations.

When you combine that with writing ability, I just question the validity of the advice. It says, Yeah, don’t pick up the phone. That’s kind of a waste. Why don’t you write articles and put it out there and people when they’re ready, when they’re 57% through their buying process will come running to you and invite you to join them into they’re already in-progress buying process