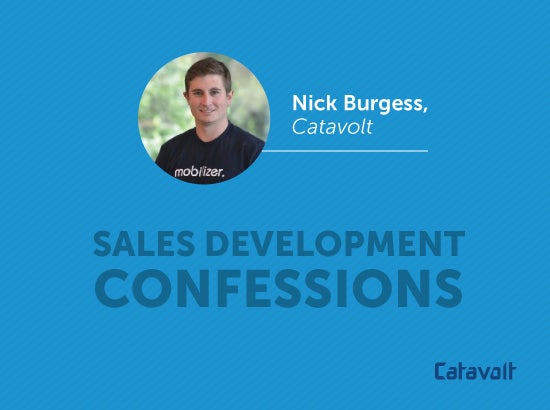 Few would like to admit it, but most sales development reps occasionally make mistakes in prospecting. Appointments get missed, calls go unreturned, and prospects get spurned — it happens. But have you ever done something a little unconventional to win back the favor of a prospect?

Nick Burgess confessed to us a prospecting blunder he had during his time as a sales development rep at Catavolt. After missing an appointment with a prospect at an event, he quickly reached back out to the prospect to win back his favor. You’ll never believe what he did to recover:

I used my singing skills to recover from a mishap that took place during an event.

Did he say singing skills? Let’s rewind for a minute and hear how the story began:

At the end of last year, Nick and his team set up a booth at the mHealth Summit in DC. A few days before the event, he was able to secure a list of attendees. With that list, he leveraged Salesloft Cadence and Calendly (ahead of time!) to set up meetings at the booth for quick demonstrations.

Unfortunately, the day of the event started off with a handful of no-shows, leading Nick and his team to believe the booth appointments were a bust. They decided to grab a quick lunch, despite their lineup of appointments — but while they were away, one of the prospects actually showed up.

When Nick returned to the booth and realized the mishap, he reached back out to the prospect, Mark Lederman, to reschedule the appointment.

Mark: “Nick, I stopped by the booth at my appointment time and found no one there.  I returned 15 minutes later and the same was true. Your company got high marks for offering me an appointment, but the goodwill quickly dissipated when you were a no-show.”

Nick: “My sincerest apologies for not being at the booth. My colleague and I ran out quickly to grab lunch, but it took longer than anticipated. Having the exhibit hall open from noon-7pm wreaked havoc on our eating schedule. As an olive branch to try win back some of that goodwill, I am willing to do a rendition of American Pie by Don McLean before a 10 minute intro call. What are your thoughts?”

Mark: “Good recovery, Nick. Full 8:33 minute version with full dissection of what all those verses really mean? We’ll see. Meanwhile, I’m off tomorrow and will reconsider over the weekend.”

By owning up to his mistake and combining humor with humility, Nick was able to win back the prospect’s favor and schedule another appointment.

Everybody makes mistakes, even the top sales development reps in the industry. Moral of the story: Be honest, be humble, and when all else fails, be funny!