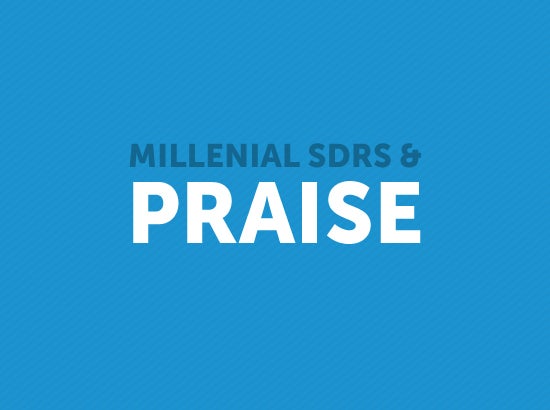 How Millennial SDRs Can Overcome Their Praise-Overloaded History

Everyone knows the millennial reputation.

They’re the trophy-seeking generation — walls riddled with participation ribbons and a history filled with praise-overload from parents, teachers, and coaches, alike. When little, they were told they could do anything they set their minds to, and then sent out to go do it like the superheroes they thought they were.

And now that they’re out in the real world, they’re failing for the first time in their lives.

Many of them are entering the sales workforce but have no idea what they’re actually good at because they were told they’re good at everything. They’re job-hopping from company to company, trying to find their niche, and they’re failing.

How can millennial sales development reps overcome their praise-overloaded history?

First, let’s get something out of the way — employers need to stop being afraid to hire millennial SDRs. Their quick adaptation to new technologies, entrepreneurial spirit, data-driven personalities actually make them great SDRs, but many employers discount them because of their bad reputation. By 2025, millennials will make up about 75% of the global workforce, so managers need to get on board with the generation.

Now, once a millennial is hired into a sales development role, something needs to happen — and listen up, because this is important — they need to fail.

Let’s be clear: there is no shame in failure. In fact, failure is good — necessary, even — because it’s the best way to learn and grow. Unfortunately, most Millennials have never experienced true failure before now. So managers need to let their SDRs fail, and then use that failure as a coaching opportunity.

That’s where transparency comes into play. Millennials have grown accustomed to getting a gold star whether they got an A+ or a D- because no one was brave enough to be honest with them when they failed. But when a manager is completely transparent with their SDR about their mistakes — and what can be done to fix them — that’s where the magic happens and the SDR begins to grow.

Culture plays a huge role in this transparency. Both the SDR and the manager need to have positive core values in order for the criticism to be constructive.

Positive is finding the silver lining. It’s transparent, vulnerable, and authentic…not Pollyanna fantasy but believing in the future. Not just in yourself, but in the collective of those around you. It’s the belief that together we can overcome anything.” – Kyle Porter

Millennials need to be broken of their praise-only mindset and trained to use failure and constructive criticism in order to achieve growth. Only then will they become vulnerable enough to fall down, but independent enough to get back up and try again.