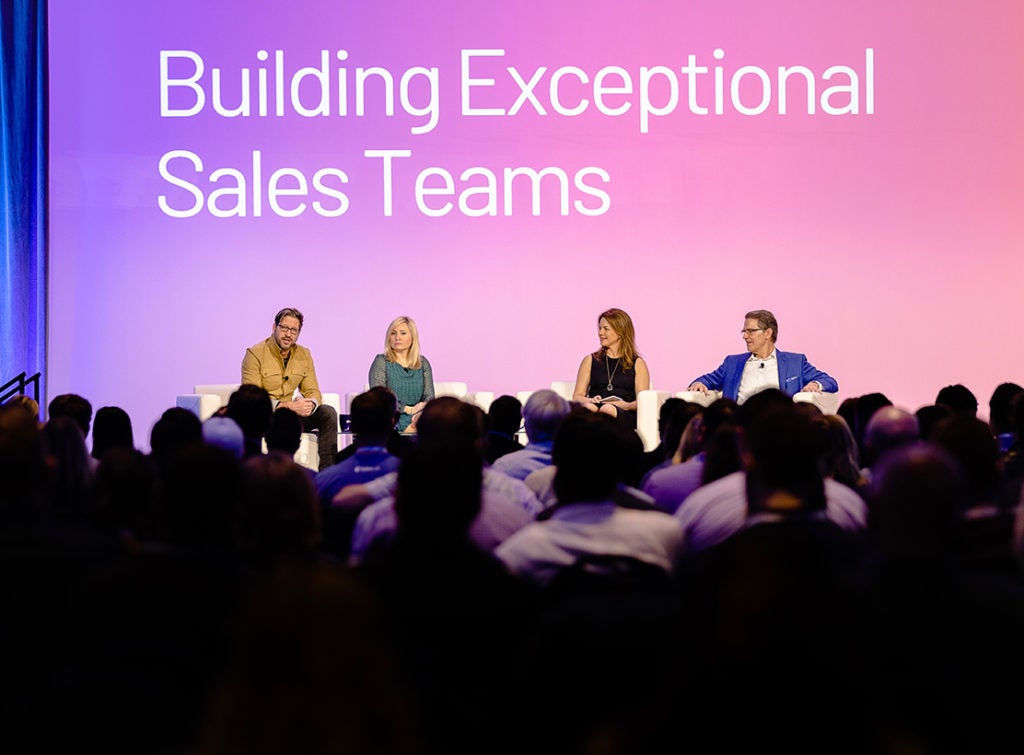 How to Build Exceptional Sales Teams

This post will recap the conversation to help you take your sales teams to the next level, and includes a few bonus questions we didn’t get to on stage. 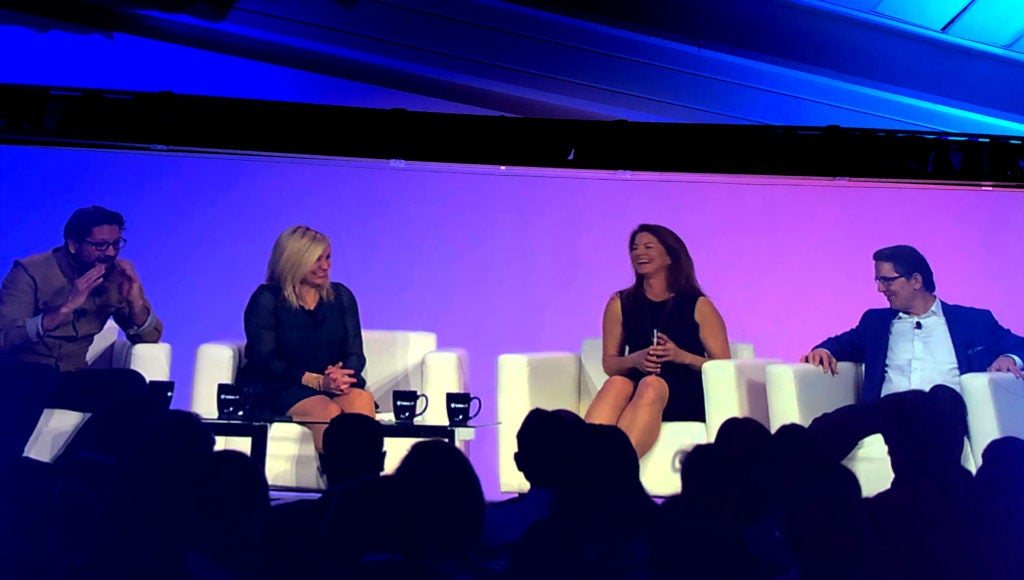 What leadership principles do you live by? Where did they come from?

Steele: I learned the most during my time at Salesforce working for Mark Benioff. My time there taught me how to adapt and embrace a new way of working, to be agile and adjust the cultural make-up of the company.

We communicated with passion, rather than arrogance. It is a place where we focused on the customer journey and not just the transaction. Being a great listener and solving customer problems rather than simply pushing a product sounds basic, but it is so important.

Merwin: The foundation of my leadership principals are: vulnerability, fostering deep relationships, trust building, and fast feedback. Read Radical Candor for a great reference for creating better relationships at work.

Roberge: There are two areas that stand out the most. First is having a perspective on priorities between your needs, your team’s needs, and the company’s needs. My perspective is company, then team, and then me. It helps to align everyone on the common goals.

When you think about great sales leaders, either people you’ve worked for or those that have worked for you, what is the one word about them that inspires you?

Merwin: Tessa Delrio is a badass. She possesses an incredible combination of call-to-excellence and caring. This makes everyone want to be better, both for themselves and for her. When you have that combination, you can do more and be more.

Steele: Leaders who are genuinely curious. Learn, listen, and ask great questions in an authentic way. Mark Benioff was once a sales rep. Today, he still engages with customers in a way that shows that he cares about the business and wants to help solve their problems. He also cares deeply about his team.

Mark officiated our wedding and spent 3 hours walking through our vows. When my wife Amy nailed them, he gave her a big hug. When it was my turn, he challenged me – as he did for 13 years at Salesforce – to do better.

It’s during times of conflict that true character emerges. What do you recommend leaders do to prepare?

Merwin: This is why trust building and vulnerability are so critical. That foundation allows you to create a space where you can have those tough conversations, focus on why are you’re here, and how to find the way out. 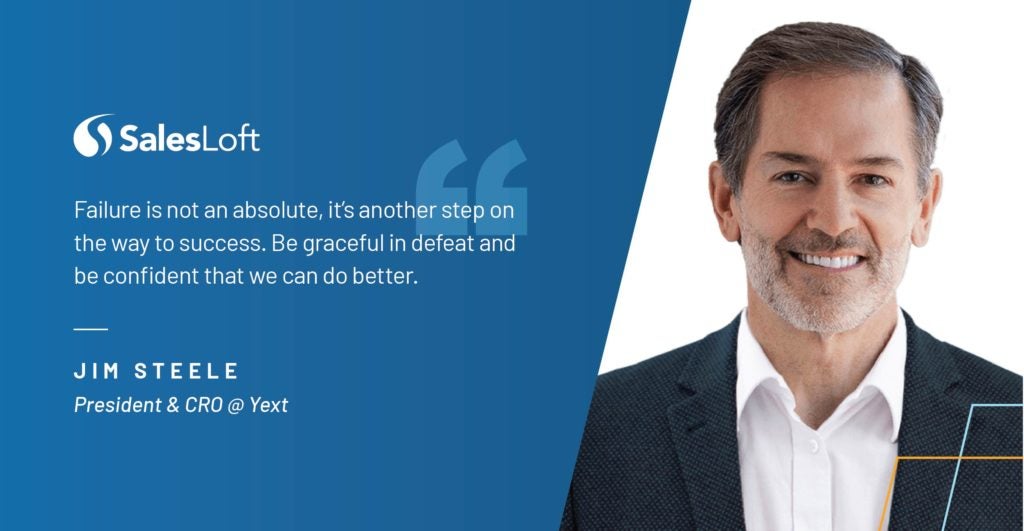 Steele: My biggest disappointment at Salesforce was when we lost Morgan Stanley, a $30M/year customer in 2013. It was devastating. Two weeks later, we were on stage at kickoff with Tony Robbins. He drew out my heart and soul in reflecting on how and why we lost. Failure is not an absolute, it’s another step on the way to success. Be graceful in defeat and be confident that we can do better.

Roberge: This is a classic example of understanding the psychology of sales, whether it’s a difficult customer situation, two reps fighting over commission, or a misunderstanding between marketing and sales. First, actively listen. Show you understand and then explain the perspective. Next, move to build a solution, and show your team how it fits into the broader picture.

Salesloft’s Core Values inform every hiring decision we make. Do you have a magic formula for what the right team make up looks like, or how to determine the right balance of talent on your sales team?

Steele: You need to be aligned, have strong communication, and bring along your most trusted leaders. Look for people who have high self-awareness. The biggest failure in management is waiting too long to take action when someone does not fit. 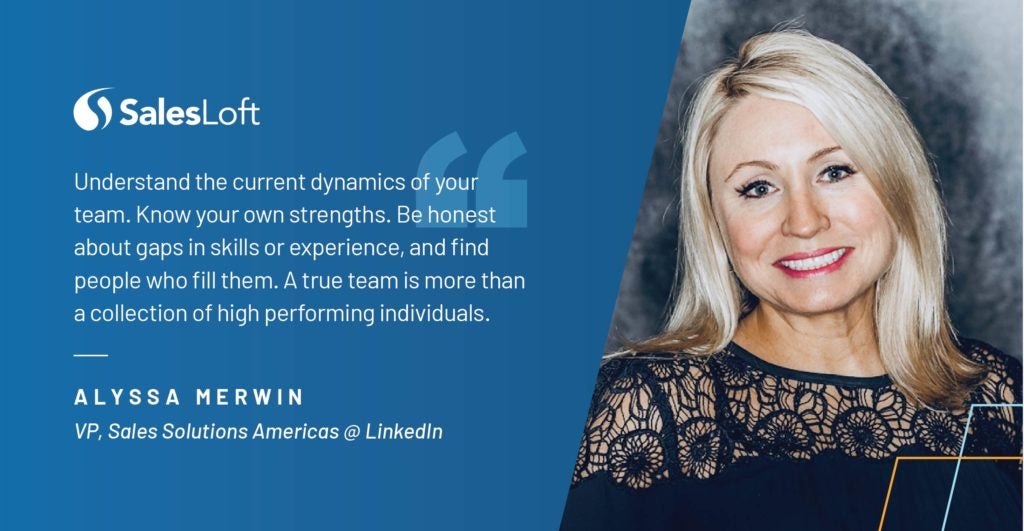 Merwin: Understand the current dynamics of your team. Know your own strengths. Be honest about gaps in skills or experience, and find people who fill them. A true team is more than a collection of high performing individuals.

Roberge: Don’t try to cut and paste your previous role. You have to align the teams you lead to the buyer as well as the stage of the company and the economy. Understand these first, then align and build your team to serve a common purpose.

Also, look at diversity. Specifically, gender diversity. I’ve seen studies that indicate women in inside sales outperform their peers. You should do it because it’s right, but it will impact your bottom line as well. Make sure you create a comfortable place where everyone can thrive.

Think of all the teams you’ve built over your career. Which one was the biggest learning experience for you?

Steele: I started many years ago at IBM selling mainframes and quickly realized when I moved to Silicon Valley that I had to reinvent myself. I’ve learned a lot since then. Here are my top 5:

Merwin: I learned to start with a shared vision and common purpose. Some of the questions I ask are: Why are we motivated beyond our revenue target? What is our rallying cry, our reason for being? What is our role in achieving the goals?

Be clear about what you are collectively striving to achieve. Then empower and hold each other accountable.

Roberge: When Hubspot first went to Dublin, we sent a great performer to Europe to build out the office. We staffed it half with Boston employees and half Dublin. The goal was to replicate the Hubspot culture. We realized that part of our culture was Boston culture, not Hubspot culture.

You have to give room for regional offices to develop their own culture around the company’s overarching culture. Our end goal was to replicate the pieces that were core to our business. In the end, Hubspot Dublin had a pub that was our extended office hours location.

As the great Oprah Winfrey says, “failure is just life trying to move us in another direction,” and one of the best ways we can learn to embrace it is by talking about it more. What’s the greatest failure you ever had?

Merwin: I learned the hard way that what made me successful in my last company would not necessarily guarantee my success at LinkedIn. The 360 feedback I received after my first six months revealed that, while I had focused on having an immediate operational impact, I under-invested in building relationships and aligning with the culture.

That was the darkest day in my leadership career. It hit me hard. I decided there were four things I needed to differently.

It took time, but I was able to mend and build meaningful relationships. I evolved from a manager whose team would not go into battle for me, to a leader whose team is cohesive and high-performing.

Steele: When I joined a company whose culture was the antithesis of who I was, I learned the value of aligning in values. I felt that I could change the culture, which turned out to be a futile effort. If you don’t have a technology that works the way you sell, it is a recipe for failure. 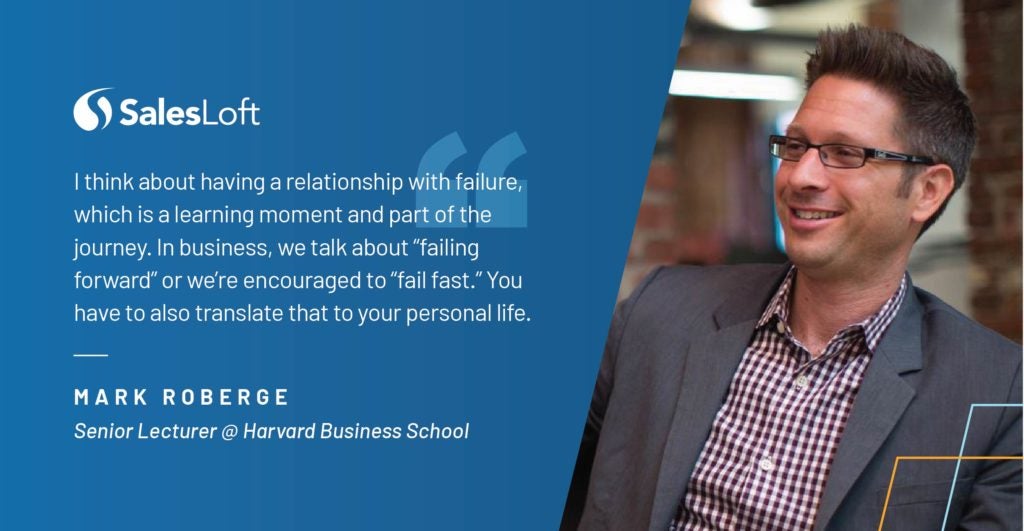 Roberge: I’ve studied and taught on the subject of failure. I applied to Stanford, Harvard, Wharton. I didn’t get in. However, a year later I was accepted into MIT. I failed at my first startup. Now I teach at Harvard.

For me, I think about having a relationship with failure, which is a learning moment and part of the journey. In business, we talk about “failing forward” or we’re encouraged to “fail fast.” You have to also translate that to your personal life.

We hope you enjoyed the wisdom around leadership, building exceptional teams, and character-defining moments that has led these exceptional sales leaders to success.

Effective sales coaching is an ongoing and evolving process. For more on how to best leverage technology to scale coaching, check out our eBook dedicated to the topic.