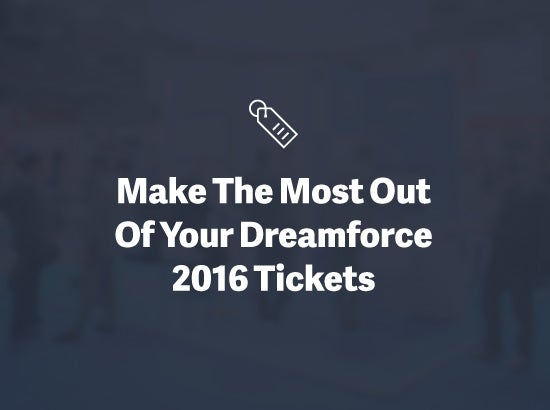 Make the Most Out of Your Dreamforce 2016 Tickets

For some, hitting the road is a regular run of business. For others, travel is a luxury — only afforded every so often, when the company feels the event warrants the cost for multiple team members to attend. And in the case of Dreamforce, the biggest software conference of the year, this is often those members’ chance to finally take it to the sea.

So when you’re handed the golden ticket and planning your trip to the San Francisco bay, how do you take the time to make sure you really savor the experience — for both work and for pleasure?

Between the tips from both the seasoned travel vets and newly nomadic, find out how you can make the most out of your Dreamforce 2016 tickets this year:

Make Yourself Visible to Your Prospects

If you have a prospect that’s going to be speaking at Dreamforce sessions, obviously go see them speak. But to make yourself more visible to them when you do, email them beforehand letting them know that you’re going to be in attendance. Tell them you have a few questions to ask about their session topic and be specific.

Then, sit up front at the session, shake their hand before it begins, and make sure to participate if you can. Finally, after the session is over, wait to talk to them and ask a few questions, and then ask for a follow up meeting.

No one in history has ever turned me down after that process.”- Kyle Porter

Think back to college. The best advice my sister ever gave me was to make myself visible to my professors. It’s easy to get lost in the sea of students in a big university lecture hall, so she told me to sit up front, attend office hours, participate, and email the professor with questions regularly.

This strategy, without fail, guaranteed that by the time finals rolled around, the professor was infinitely more likely to give me bonus points just for familiarity. And it’s that same familiarity that will continue to connect you with prospects all the same.

Tack on Extra Travel Time to Your Trip

Just like most conferences, Dreamforce leaves the opportunity for the trip to be bookended with at least one extra weekend of travel. But if you have the time, and your company flight schedule allows it, now’s your chance to take that well deserved PTO.

If you’re a modern sales rep that’s anything like the reps running around the Salesloft office, the week before may not really be an option — so many appointments to set, so little time! But the week after the event could prove just the ticket.

Afraid to bail on all of that hard earned networking by missing out on the chance to follow up with your newly minted prospects? That’s why you should be crafting your post-Dreamforce cadences now!

If you’re already geared up and ready to get those touchpoints moving, it won’t be such a tragedy to be running those cadences sitting on the dock of the bay, lounging poolside at the Bellagio, or relaxing in between slopes in Park City. The world is your oyster — so take it while you can!

Ask Your Prospects for Advice (And Take It!)

When you’re taking that much needed time off, take the opportunity to get some activity advice from your prospects on what to do in the area.

Before heading out to Toronto for a week earlier this month, our CEO Kyle Porter asked his prospects in the city what he and his wife should do while they explored the city the weekend before their meeting.

After the prospect gave him some insider tips, Kyle then heeded their advice, and went on tours of the city and ball games and more. Turns out — he got the best of both worlds! He got to get a local’s opinion of what to do in a cool new city he’d never visited, and he flattered them by actually taking their advice, to boot!

Whether it’s the weekend before and you’re sharing your travels with your prospects in person, or it’s the weekend after and you’re mentioning the experiences in your post-Dreamforce cadences, you’ll be sure to show those prospects that you truly value their advice, and you also know the value of a good work-life balance. Win-win!

We’re doing everything we can to help you gear up for the biggest week in software. Get the most out of your Dreamforce 2016 tickets by preparing for the week the right way — with Salesloft by your side! We can’t wait to see you out in Moscone… book a meeting with us today!