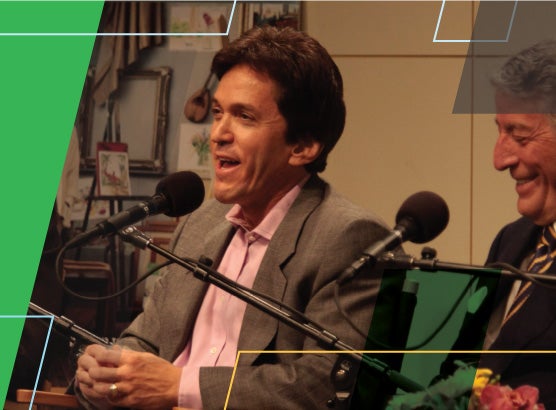 With Rainmaker less than two weeks away, we’re happy to announce that best-selling author and National Sportscasters and Sportswriters Association Hall of Famer Mitch Albom will be joining our program of world-class speakers addressing the 1000-strong crowd.

Mitch Albom will be the closing keynote for Rainmaker on Wednesday, March 7th at 2:30 pm following the final breakout sessions, wrapping up the premier sales engagement conference of 2018 with insightful wisdom that attendees will find themselves reflecting upon for days, months, and years to come.

Albom has followed a distinguished path in life and is a person of many talents. Best-selling author. Award-winning newspaper columnist. Frequent panelist for ESPN’s “The Sports Reporters”. Musician. Playwright. Philanthropist.

After building a highly successful career as a sports writer, Albom wrote the devastatingly beautiful and international phenomenon Tuesdays With Morrie, his touching account of time spent with his dying professor, Morrie Schwartz. Tuesdays has sold over 14 million copies and has become the top-selling memoir of all time, later adapted into an award-winning TV movie produced by Oprah Winfrey.

The transformational message Albom will bring to the Rainmaker stage is about the importance of making and prioritizing human connection while also highlighting the right motives for building relationships – not for profit but for love.

The most important thing in life is to learn how to give out love, and to let it come in. Let it come in. We think we don’t deserve love, we think if we let it in we’ll become too soft. But a wise man named Levine said it right. He said, “Love is the only rational act.”
— Morrie Schwartz, Tuesdays With Morrie —

In his Rainmaker keynote, Albom will cover life lessons based on his writing for Tuesdays With Morrie. Attendees will be able to apply these lessons to rise above the noise in their day to day actions, to enhance their own focus on investing in authentic human connections, and gain the inspiration to become a better version of ourselves.

The crowd of 1,000 Rainmaker attendees will hear from this transformative speaker and have the opportunity to participate in a book signing with the author.

About Mitch Albom
Mitch Albom is an internationally renowned and best-selling author, journalist, screenwriter, playwright, radio and television broadcaster and musician. His books have collectively sold more than 35 million copies worldwide; have been published in forty-nine territories and in forty-five languages around the world; and have been made into Emmy Award-winning and critically-acclaimed television movies.

About Rainmaker
Rainmaker is the industry’s largest Sales Engagement conference for modern sales leaders. With over 50 sessions from over 90 speakers, Rainmaker is a three day, exclusive invitation to gain modern sales insight from the best thought leaders in the industry, and foster relationships that will help your business thrive for years to come. Want to learn more from our customers and industry leaders? Join us in Atlanta from March 11-13, 2019 for Rainmaker 2019!