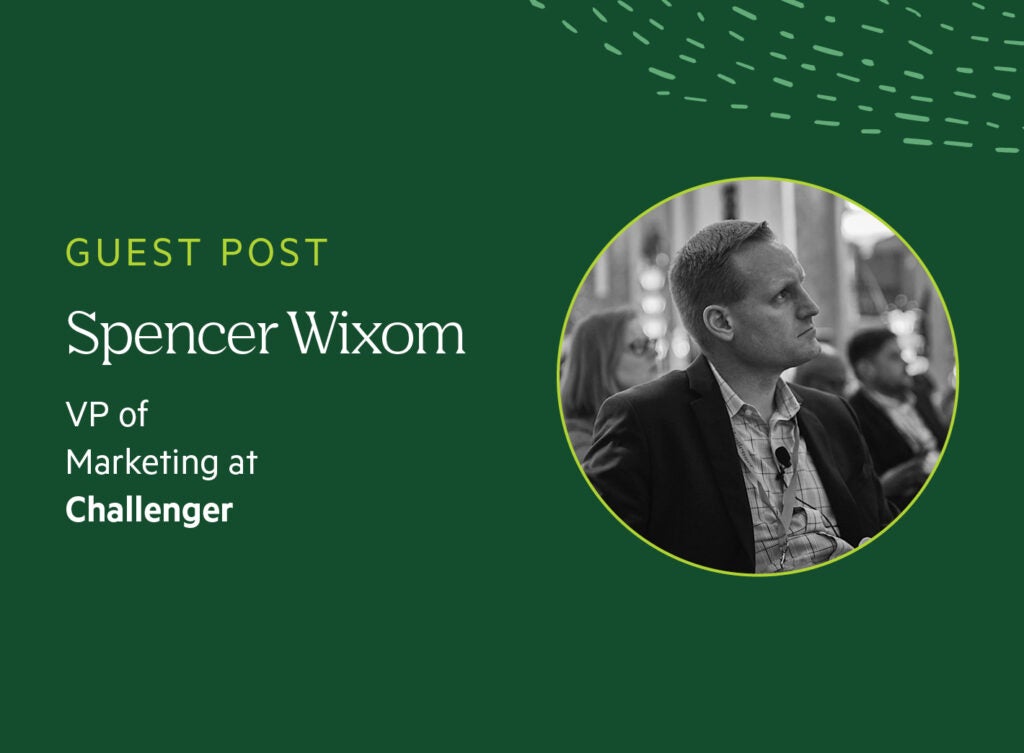 Guest Post: I Can’t Challenge Your Thinking If I Don’t Have Your Attention

Guest post by Spencer Wixom, VP of Marketing at Challenger

The following headline ran in The New York Times on December 18, 1903: “Senators Demand Facts On Panama.” What was said in The Times that day is not particularly interesting. What is far more interesting is what was not said.

The Wright Brothers (Orville and Wilbur) made their successful first flight at Kitty Hawk, North Carolina one day earlier, on December 17, 1903. Today, the airplane they pioneered and flew for the first time is considered one of the great inventions of all history – on par with the wheel, the compass, and the calendar.

And yet The New York Times didn’t mention it the next day either, or the next week, or the next year – while the Wright brothers continued to make successful flights at both Kitty Hawk and outside Dayton, Ohio. The Times finally made a passing mention in 1906, a full three years later.

How did so few people notice when something so monumental happened?

There are a few theories, but the most plausible to me is that most early 20th Century Americans, including journalists and so-called experts, considered manned flight so unlikely that they were fully unprepared to have their status-quo perspective proven wrong. What they didn’t expect to see didn’t grab their attention.

From Manned Flight to Commercial Insight

This Wright Brothers side story has a lot to teach anyone in the business of complex B2B selling. In the last 10 years, the idea of delivering disruptive commercial insight to customers and leading them to a related solution has become the sought after go-to-market strategy.

Sellers who adopt it push themselves to craft and deliver messages that break down status-quo thinking and motivate the customer to think and act differently. It’s like teaching the 1903 industrialist – who knows only horses, steam-powered locomotives, and basic automobiles – about the power and potential of flight.

But letting go of the status quo and grasping new ideas is hard mental work for customers. In most cases, it takes solid effort just to wrap one’s head around a new idea, to say nothing of shedding long-held beliefs and taking action in some new direction. Just as with the Wright Brothers, the change is not possible – commercial insight does not land its intended punch – if the customer isn’t paying close attention and ready to receive it.

Truth be told, had mobile devices, the internet, and 24-hour cable news been available in 1903, it’s likely footage of the first flight would have gone viral. But the sparse and sluggish nature of print papers, Marconi wireless and telegraphs is countered today with an overabundance of digital noise, content, and distraction. You can argue that attention today is just as hard to capture, but for the opposite reason.

Challenger is a pioneer in the area of disruptive commercial insight. We first wrote about it over 10 years ago in studies that became the foundation of our best-selling book, The Challenger Sale. We’ve since implemented the concept in hundreds of companies around the world. But we recognize the need to explore all territory around the commercial insight conversation so that sellers have the greatest positive effect on the customer buying group and the greatest opportunity to close business. A critical area for us is capturing the customer’s initial attention and preparing them to receive insight.

In our second book, The Challenger Customer, we lay the groundwork for this strategy. We suggest that selling activity and marketing content come together to take the customer on a three-stage learning journey we call: Spark, Introduce, and Confront.

Spark: Short-form content or messages that capture attention and spur customers to explore your Commercial Insight.

Introduce: Longer-form content and conversation that unpacks how the Commercial Insight works​.

Confront: Interactive content and conversation based on your Commercial Insight that makes the pain of continuing current behavior real.

A Focus On Spark

Spark is the attention grabber. It’s necessary to set up the opportunity for Introducing insight and Confronting to motivate customer action. We’re particularly excited to explore this idea with leading sales engagement technologies like Salesloft, who provide a platform for continuously improving the quality of Spark, Introduce, and Confront at scale.

If you’d like to learn more about sparking attention as part of a Challenger strategy, we invite you to join us at REV2020 in San Francisco from March 9 to 11. In fact, Challenger is offering some free consultation sessions as part of the event, where you can sit with the Challenger team and talk through Spark, Introduce, and Confront as part of your Salesloft cadence strategy.  If you’re a sales or sales enablement leader attending the conference and this opportunity interests you, please contact us here. Otherwise, you can learn more in our Tuesday afternoon main stage session, “I Can’t Challenge Your Thinking If I Don’t Have Your Attention,” at our live recording of the Hey Salespeople podcast with Jeremey Donovan, or by stopping by our booth. We hope to see you there!

Want to learn more from Challenger and other industry leaders? Join us in San Francisco from March 9-11 for REV2020! Register now.