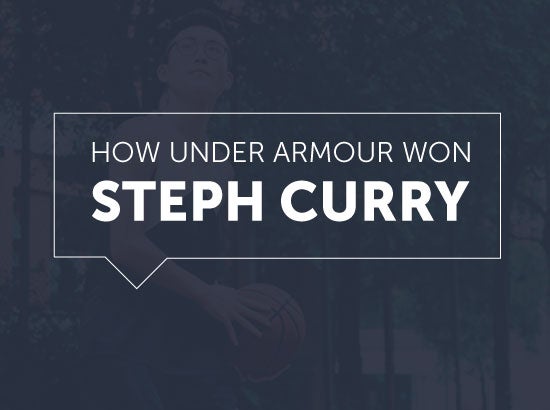 A few months back, ESPN put out a great piece about how Steph Curry went from being a Nike sponsored athlete, to the biggest star on the Under Armour roster. The article, and most impressions I’ve read from sales perspectives, focus mainly on the mistakes Nike made to lose Steph Curry.

But what about what Under Armour did to win the deal?

Their story is the one Sales Development Reps, who are constantly battling to win their prospect’s attention, should look to for inspiration.

It may be hard to remember now, but back in 2013, Steph Curry was not yet considered one of the best players in the world. Still, he was a Nike athlete, part of the machine that owned 95% of the basketball shoe market at the time. With only 1% of the shoe market back then, Under Armour likely wasn’t even on Steph Curry’s radar.

That’s what makes the story of Under Armour overcoming this disparity is so interesting.

John Barrows defines a sales champion as having 2 key characteristics: the ability to steal budget, and the agreement to be your sales champion.

Kent Bazemore (now here in Atlanta with the Hawks) was an undrafted rookie who barely made the Warriors in 2012. But what does Bazemore have to do with the story? Well, like Curry, Bazemore is from North Carolina, and the two are good friends.

Here’s where Under Armour put a plan in motion: show Steph Curry the kind of sponsorship they’re capable of, by giving Bazemore the All-star treatment.

In the words of Bazemore’s agent, “They sent him a shit ton of gear.” Kent had 19 boxes of custom gear on his doorstep before he even had furniture in the place. Now, Under Armour didn’t necessarily need someone that could steal budget from Steph Curry, but they did need a way to get his attention.

Bazemore agreed to be the sales champion for Under Armour, and soon, he became their biggest salesman on the west coast — right inside the Warriors locker room. And when he found out that the end Curry’s contract with Nike was coming up, he advocated for Under Armour and helped set a meeting between the two.

By leveraging Bazemore, a rookie and a relatively easy-get, as an internal advocate and sales champion, Under Armour earned a seat at the table with one of the greatest players on the court today.

Align with Your Prospect’s Priorities

From there, they made sure to provide value to Curry by focusing on what mattered to him, like a summer basketball camp for young players. These camps may not seem like a big deal to the casual fan, but for players like Curry, they can make or break a deal.

Curry’s experience at fellow NC phenom Chris Paul’s camp made a lasting impression on his basketball career when he was coming up through the ranks, and he wanted to return the favor.

Under Armour recognized this as a priority, and now sponsors SC30 Select Camp for the top high school guards in the nation. Curry even sends a personalized video invitation to every single attendee.

Stand Out from Your Competition

Under Armour realized that, in order to cut through the noise and displace incumbents, they needed to find creative ways to command their prospect’s attention. Leveraging Bazemore as sales champion was their first smart move, but it didn’t hurt that Riley Curry, Steph’s daughter, was also on their side.

Not only did Under Armour design stand out in design and creativity, but the care and personalization that they put into every aspect of their pursuit of Curry are ultimately what sealed the deal in the end.

Under Armour signed Curry just as he was about to become the most popular player on the planet, and he now represents over $14B in value to the company. But they wouldn’t have had a shot in hell if it wasn’t for the innovative approach that they took to capture Curry’s attention.

Every single prospect deserves a sincere, personalized approach — whether it’s the undrafted rookie startup, or the most popular company on the planet. Put a plan in place, deliver an excellent customer experience from end to end, and go get your Steph Curry.