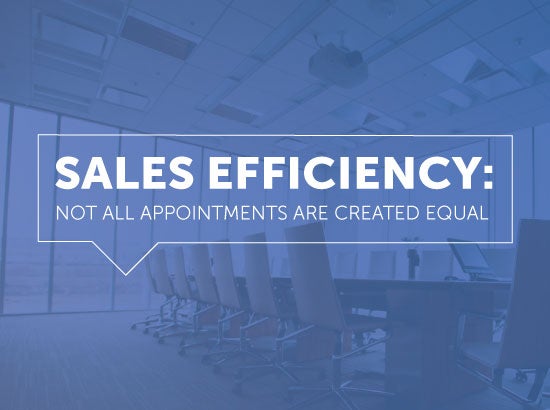 Sales Development Efficiency: Not All Appointments Are Created Equal

December’s blab chat was full of powerful takeaways from Jacco van der Kooij, Craig Rosenberg and Kyle Porter on moving past elementary sales development metrics. We shared Jacco’s top piece of advice for SDRs and his 3 metrics to measure for success, and now we’re onto Kyle’s metric for sales development efficiency.

Let’s say you’ve got 2 Sales Development Reps, Spencer and Susan, who set up 30 sales accepted leads in the month. Each of these 30 appointments are equally qualified — it’s equal pipeline opportunity.

From a VPs of Sales and inside sales development leaders perspective, Susan is way better for the organization. She’s helping out in a number of different ways. She’s creating an environment that’s scalable, more predictable, more cost effective and efficient, and doesn’t cause harm to the organization.

1. She’s saving the complexity, cost and time around data management. If she’s only going after 400 accounts, and they’re splitting that amongst their team, it’s easier to manage that information coming into the system.

2. She’s not scorching the earth as she goes through prospecting (unlike the thousands of accounts that it took Spencer). The most important aspect of this is when Susan is prospecting — and touching people with more personality, more customization, more intentionality about converting that account — she’s not eating up all of the other prospects the other SDRs could be approaching.

This is beneficial because, in most organizations, when a rep has a meaningful interaction, other reps can’t touch that person for 40-60 more days. But by being more efficient in her process, Susan is eating up less of those opportunities for the rest of the organization by not sending out blasts or having non-meaningful or non-personalized connections.

This level of depth is what allows Susan to able to focus her intentionality on individual accounts, and make those relationships better. She and the prospect understand one another. They’ve gone deeper, and that lays the groundwork for a more effective sales cycle.

But why is this not commonly understood in the marketplace?

Talk to your leadership team and lay out these two paths. Path A, the scorched earth policy, and Path B, personalization, customization, account-based sales development — where you’re not focused on volume, but on conversions. The second path is always the one chosen by business leaders.

Sales Development Reps need to start thinking this way — and their team needs to start coaching them to think this way.