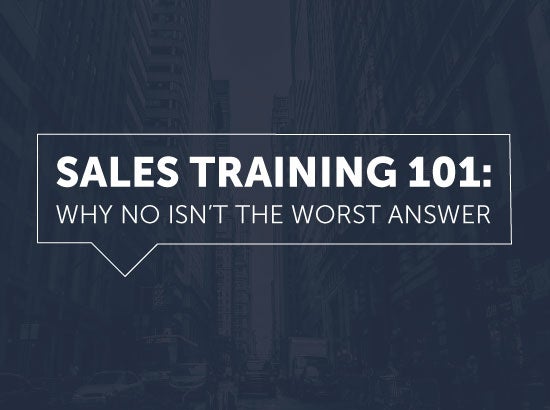 Sales Training 101: Why “No” Isn’t the Worst Answer a Sales Development Rep Can Get

In one of our recent sales training sessions with John Barrows, he made a great and profound point:

The worst thing in sales is not losing, but instead taking a long time to lose.”

Most Account Executives are very familiar with this, and can probably tell you a deal right now that took longer than it should have to get to the “no.” But as an Sales Development Rep, prospects who take a long time to get to the “no” can still be just as unsettling.

In most sales training sessions, taking “no” for an answer is simply unacceptable. And while you should never get comfortable being told “no,” the fact is, you’re going to hear it a lot in sales.

But here’s the thing: getting a “no” may not be the worst answer an SDR can get from a prospect… it’s the “Long No” that’s the worst.

There’s a ton of ways that prospects can give you the “Long No” (or, as I like to call it, the LoNo) and they always end up wasting time on both ends. Here’s 4 examples of the dreaded LoNo:

This is the prospect who’s afraid to say “no” in person (or on the phone). They may even schedule a meeting with you, before eventually backing out or pushing it off completely.

Most SDRs can sense this “no” from a mile away, and should address it as soon as they do. Ask questions like “Are you afraid to tell me no?” or “What’s stopping you from committing to a time?”

This is the best way to get right to the heart of their decision (or lack thereof) and establish a sense of urgency.

This is the prospect who has no intentions of looking into this further, but wants to push you off to email. This way, they can say no through email, or simply ignore you. A variant of the Timid No, this answer is super common in prospects.

They want you to send them something — a follow-up email, pricing information, more content, etc. — which, in nearly every SDR’s case, you already have. But the idea is that they will supposedly read it, and get back to you, “if they are interested.”

This is a “nope” waiting to happen. They most likely won’t give your email the attention it deserves, and in the same time that it has taken to have the conversation, send the email, have them read the email, and reply — you could’ve already shown them the value of your product.

In this case, blocking off time for a meeting is always going to be the best use of both of your time. And when it comes to the, “we’ll get in touch if we’re interested” line, just remember this: if the world waited on business to come to them, sales would be obsolete. This is why you should always defer to scheduling another discovery call over “sending something.”

This is the prospect who sees value in your product, but isn’t willing to commit to time to explore right away. They’ll normally give a short-term follow-up time (say, a week or two), but then ultimately say it’s just not a priority.

One of our SDRs here at Salesloft, Angela Kirkland, is great at combating this line on the phone. When a prospect says that it’s not a priority, or asks her to follow-up down the road, she immediately addresses something in their job title/description that contradicts their priority list.

Ultimately, if you’re sensing a Push-Out No, this may or may not get you a yes — but it’s worth a shot. If then it’s still a “no,” it’s better to try to accelerate that answer, rather than spend time and effort only to result in a dead end.

This is the prospect says they’ll share this with their boss, or that they’ll “pass the email along,” which usually results in a back and forth banter before ultimately ending with “no.” What can they do? It’s out of their hands…

This “No” is the hardest “no” to defend. If the prospect is merely saying that they’re “passing the email along,” with no mention of a specific name or department of whom they’re passing it to, then it leaves you high and dry.

Ask them who they’re passing you along to — then you can always reach out to that person directly. If you don’t get a specific answer, then the best thing you can do is research the account on your own and find a different contact. The sooner the better.

In any case, the best way to combat “no” is always going to be to pick up the phone and learn more about their business. Bring your shovel and find a way to dig in and learn what their pains really are in the context of their process.

It’s our job as SDRs to provide that value up front, and make them realize that they do not want to pass up this meeting. But don’t just take my word for it: when the next prospect just says “no,” I challenge you to really push back and find the real reason behind their hesitancy.

If our sales training has taught us anything, it’s that time is everything to an SDR. Spending our time having meaningful conversations that result in purposeful, qualified sales meetings is the most important part of our job. And spinning our wheels with prospects on The Nope Bus is only wasting more of that precious time.

Dig as much as possible, as fast as possible — and if they don’t get it, that’s their loss. On to the next one. There’s a world of people out there willing to listen and understand the value of your product. Don’t waste your time on the ones who won’t, and don’t be afraid to get to a “no.”

Here’s a clip from the John Barrows sales training: