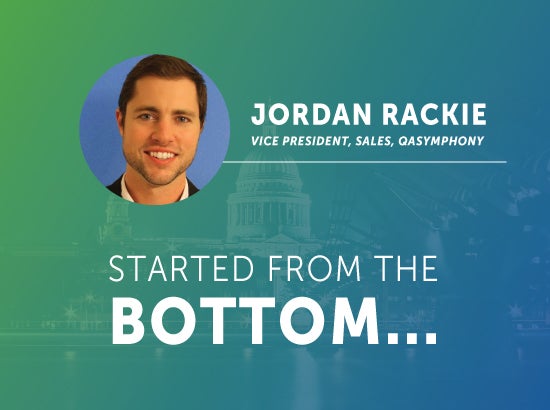 Growing up, I spent the majority of my teenage summers working at a local restaurant. My parents believed that everybody should work in the restaurant business at least once in their life to help build a servant attitude and learn that with hard work comes reward.

Sales development is no different.

The true foundation of leadership is not power, but authority, which is built upon relationships, love, service, and sacrifice. -James C. Hunter, The Servant

This series kicked off last week with Jon Parisi of Guidespark, and now we’re getting a chance to hear from Jordan Rackie of QASymphony. We asked him how his experience in sales development and how that foundation has shaped his career today. Here’s what he had to say:

1. Where was your first job as a Sales Development Rep?

Hannon Hill. My job was to set up one hour appointments and demos for the closing reps.

2. What was the company’s history with sales development?

I was their first sales development rep. I worked with the COO, David Klanac, and the Director of Sales, Blaine Herman, to formulate a outbound prospecting plan of attack.

3. Was there a set career matrix for SDRs?

I had a couple of targets including total meetings set and revenue booked. We created a Salesforce dashboard that had a dial that helped me track my progress.

I’m currently the Vice President of Sales at QASymphony. We have four SDRs, and the team is growing. We had our first SDR join in November of last year. The SDR team is tracked and incentivized on multiple fronts, from SQL acceptance to getting kickers for closed won deals they source.

BONUS! : What is one piece of advice you would give to someone entering their first job as an SDR?

Take ownership of gathering quality leads. Start every morning with a daily plan of attack, and make sure you leverage both your assigned coach (manager), as well as mentor who is in a role you aspire to be in one day.

Don’t believe us? Stay tuned for more sales development leaders who began their careers as SDRs.