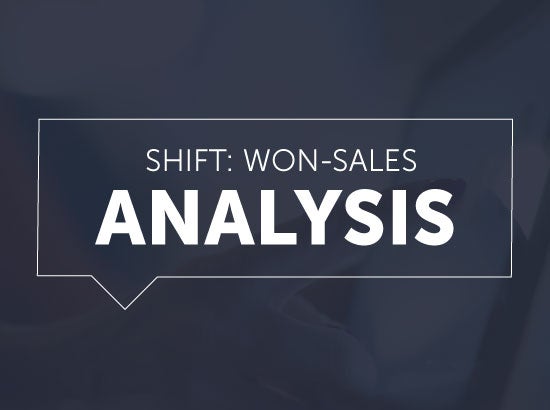 Many salespeople spend a lot of time critiquing where things went awry if a deal goes bad. But in the book SHiFT!, Craig Elias and Tibor Shanto encourage reps to, instead, practice regular won-sales analysis.

For outside and inside sales reps alike, studying wins can be quite complex.

For instance, the CRM salesman used as an example in the book had two major epiphanies. First, he realized that his ideal customer profile (ICP) were clients in the VP of Sales role, particularly within six months of being hired. Second, he noticed that HR consultants usually helped the companies during drastic role transitions.

From this, he concluded that he should build sales champion relationships with HR consultants in order to become their “emotional favorite” recommendation to the companies they worked with — setting him up for those perfect won-sales scenarios.

Preparing for a Won-Sales Analysis

It’s nothing new for sales organizations to use a similar analysis to figure out their ICP. And sales reps naturally tend to keep doing more of what they feel is working in their sales process.

Still, after trying it out for myself, I realized that truly conducting a won-sales analysis requires a paradigm shift. It’s hard to break the habit of cringing and critiquing those moments that spark “I should’ve said this…” or “I should’ve done that…” epiphanies.

Codifying your winning behaviors beyond call times and basic objections takes practice. For instance, when listening back to ten calls on ExecVision, I found that I was doing better at handling (and winning) appointments with aggressive, straight-forward prospects — which, to me, seemed a little counterintuitive for my sales style. Apparently, my kindness was actually killing me (and my sales).

This particular observation caused me to wonder what exactly I was doing differently in those scenarios, and how I could trigger it without a sarcasm-induced stimulus from an annoyed prospect. After all, there’s no way to filter prospects by attitude. (Not yet, at least.)

But figuring out that answer might be just the ticket to being in “the zone” on purpose.

Obviously, SDRs don’t necessarily have full control of who their prospects are, and they often work with short timelines. Still, the concept of studying wins is a strong concept to be applied when trying to replicate those won-sales scenarios.

The biggest benefit with won-sales analysis is more effective practicing — the only way for consistent, measurable improvement for an SDR that’s already great.

Why do basketball players not just shoot over and over again, but practice shot mechanics? Professional athletes, in general, do not simply lean on repetition. They stress repetition in a specific form.

This allows you to win with less energy spent. When I played football, form made all of the difference in tackling a bigger, faster players. As a matter of fact, the best tackles, although not the most entertaining, made the least noise and involved very little struggle. As Vince Lombardi once said,

Practice does not make perfect. Only perfect practice makes perfect.”

Externally, the won-sales analysis is about creating the circumstances that best set you up to win (ICP, sales tools, timing, etc.). But internally, it’s more about honing your strengths, and learning to effectively apply them in your everyday sales interactions.