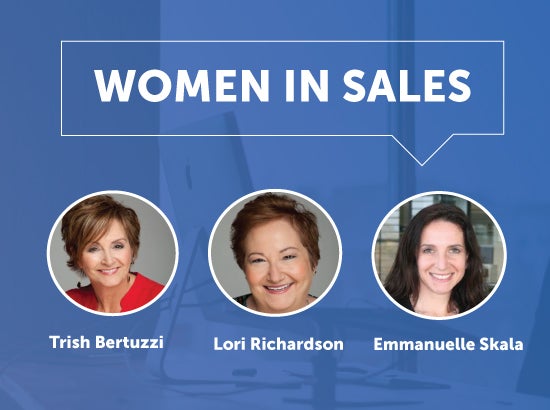 Women in Sales are Bringing the Workforce to 50-50

Women in sales are taking the world by storm. And last week, we sat down with three of the industry’s top ladies to get their take on the gender’s growth within the sales development community.

Trish Bertuzzi, CEO of The Bridge Group (and best-selling author of The Sales Development Playbook), Lori Richardson, B2B Sales Growth Strategist of Score More Sales, and Emmanuelle Skala, VP Sales at Influitive, sat down with Salesloft’s Director of Marketing, Tami McQueen to break down barriers and talk about getting the workforce to 50-50.

As sales go-getters, ready to make it happen, these women in sales are not going to let anyone hold them back. But what about those companies that aren’t on the same page as these #girlbosses, yet? Those still hiring without gender equality in mind. Many sales organizations strive to hit that 50-50 gender mark, but the lack equality on the sales team, much less the entire company, is still a glaring imbalance in the modern sales organization.

We asked the power players, how do we change the mindsets of these imbalanced organizations? How do we get them on board and see the need for this change and shift to a 50-50 workforce?

According to Trish, the attention has been focused predominantly on diversity. That’s a whole other issue out there that’s just as important. And because of the constant tug of war for equality within the workforce, and separations of focus, she’s not sure the gender ratio will ever get to 50-50. But, in her opinion, that’s okay:

“I don’t want to fly the banner that’s saying 50-50 is the right number. All I want, our clients and our colleagues, and other people in our community to do is think about how you’re communicating the opportunities in your organization.”  -Trish Bertuzzi

All that truly matters is language and representation. “If you call someone who makes quota a “baller,” and I have a client who does, then that’s the title you get if you make quota: a “baller.” But I don’t want to be a “baller.” Think about the language that you use, the videos that represent you, and your social media outlets. What is your social presence saying to women in sales? What does your interview process say to women? What does your management page say about women?

We’re starting to get smarter, but we just have a long way to go.” -Trish Bertuzzi

Lori agreed, saying many CEOs she consults say, “We want more women on our team. Can you help us? Can you give us ideas?” But you look at how they write their job descriptions, they’re filled with language that’s off-putting to a certain percentage of the population.

“Many people are looking to embrace having more women on their teams because they know that it’s an ROI issue as well. They know it will be beneficial. And interestingly enough, it’s the men that have daughters that are most interested.” –Lori Richardson

Emmanuelle’s take? “Most organizations want to have diverse companies. But they’re struggling with the small things that they don’t see that’s preventing that.” Whether it be language in a job description, what their website looks like, or even how they define the role of sales, the qualities that they’re looking for aren’t solving the problem. They think they’re shooting for diversity, but then they say, “I’m just looking for an athlete.”

I’m not saying that there aren’t women athletes because there are. But there are fewer women athletes than there are male athletes, and so when you say that, you instantly are not 50-50 just by using that language.” – Emmanuelle Skala

Even though that kind of language doesn’t explicitly equal gender discrimination, it’s referencing an already imbalanced field and using it as a measuring stick for your organization. So, naturally, you’re encouraging the wrong demographic to apply for the job.

As for that job application? It’s not all the organization’s fault. Statistics show that men will apply for a job if they feel like they’re only 70% qualified for a specific role, but women won’t unless they’re at 100%. They feel like they have to check every box before they apply — they shy away.

Women in sales need to start negotiating their way to leveling up their career, and taking on bigger responsibilities and opportunities. We asked the group what some of the best advice they’ve received when negotiating that stellar career.

Trish’s favorite tactic? “Ask for what you want and then shut up.” It’s that simple, just put it out there.

If you’re not embarrassed by what you just asked for at least once a day, then you’re living in your comfort zone.” -Trish Bertuzzi

Emmanuelle was in agreement about the bold factor. “The shut up part is critical,” she said. Women tend to ask for what they want, but then give a thousand reasons why. They make a bold statement, but then end up digging themselves back into a hole.

Women in sales need to silence the inner dialogue in their head that make them feel that they need to justify everything. But they don’t. You want a raise? Just ask for a raise.

Lori’s example of Andria Walls, author of Go For No, explains the best way to strive for confidence in the workplace. The challenge in the book is to try to get five ‘no’s’ a day. To stretch yourself, and ask the prospect again, even if you’re pretty sure they want to wait another month.

Call them up, talk with them, get your no, and then move on. If you look for no’s, you’re going to get a few ‘yes’s’, and it’s really amazing how that works. You’re not going to be hurt by getting a no.” – Lori Richardson

Women need to stretch themselves. They need to get out of their comfort zones — be brave and just step up and ask for things.

You’re not going to get something that you’ve never asked for. It’s all a learning experience, and hopefully the person that said no can educate you on why you’re not going to receive what you asked for. Better yet, push back. May I ask why you said no? It’s all about confidence and standing up for yourself.

The gap is closing every day, and it’s women like Trish, Lori, and Emmanuelle that are leading the charge. Women in sales are strong, confident, and impactful, and they should be empowered as such. Join us as we continue to push for the 50-50 ratio in the modern sales organization.

For a more comprehensive look into Salesloft’s internal SDR process, download the second section of our newest playbook trilogy, The Sales Development Playbook: Executing. In this section, we share the ins and outs of efficiently using Salesloft to call and email prospects. Download our free white paper and optimize your sales efforts to start crushing your sales development goals today.