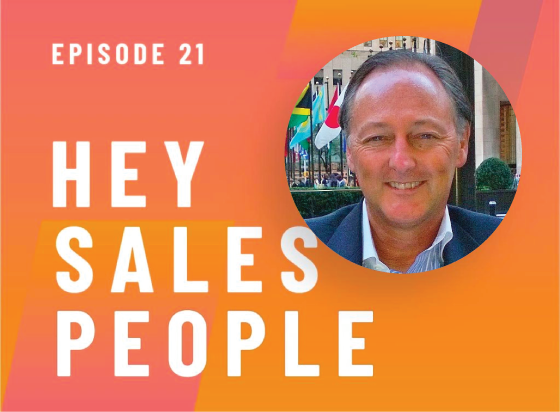 There is no denying that the sales landscape is radically changing and Kurt Heusner is leading the charge.

As the Vice President, Americas Digital Sales at Citrix, Kurt is redefining the customer experience and helping organizations move toward subscription and cloud models.

In this episode of the Hey Salespeople podcast, Kurt shares sales techniques for the new buying environment and the important things sales pros need to know about building rapport, personalization, and the new generation of sales leadership. 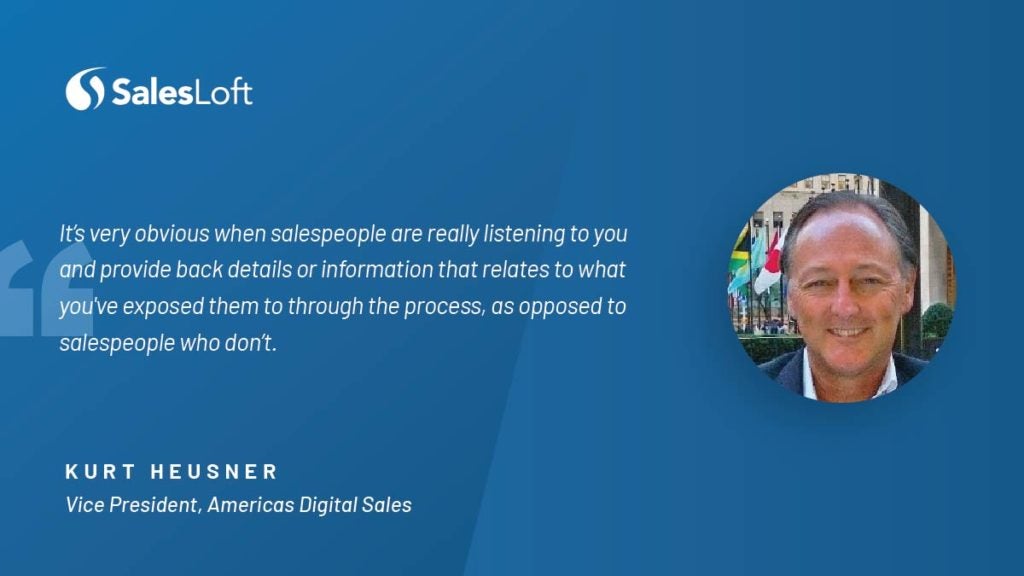 Traits that Correlate with High Performance

Jeremey: When you reflect on some of the analysis that you’ve done to identify traits, characteristics, and behaviors that correlate with high performance, what are some of those? Especially those that might be more unexpected.

Kurt: We’ve studied transcripts of a variety of salespeople over periods of time. We look at what words or phrases are most commonly used with those customers when success is prevalent… and when it’s not. Even then, it’s very difficult because it tends to be very situational. There’s still a human aspect of it. That’s really hard to just put pure math and statistics to. It comes down to how did they interact and in what timing.

So we try and do things that make people more sensitive to those that can help them to get past some of the rapport portion of it. But it comes down to the individual.

Jeremey: You mentioned several times building trust through these nuggets of value. Can I kind of reverse your role from sales leader to sales buyer? I’m sure people are pitching to you all the time. What do you look for when someone tries to initially engage you and then work with you to position their solution?

Kurt: It’s probably a little bit of a bias off of my own work that I did, or that I try and inspire my teams with.  Personally, I do quite a bit of research trying to understand the individuals that are a part of a decision that could influence it, or things that might be influencing the company.

I do a ton of background investigation of my own to make sure I’m as informed as possible, so when people come at me in a very generic email blast they’re not getting through with that. I have spam filters on all those things. They have to be engaging with me in a way that demonstrates that they’ve done some investigation to understands who I am, what I’m doing, and what might be valuable to me.

There are enough information sources today in contrast to when I initially started selling. Some salespeople are just lazy about it or try to do it at such scale that the personalization doesn’t come across. I think it’s really important to make sure that people understand what we’re trying to do here and reflect on something recent that you purchased where you felt the salesperson truly added value during the pre-sales process.

In the case of Salesloft, we’ve had a really great experience. They always came in helping us think through different things that they expected or anticipated us experiencing. We test those out. I appreciate the use cases of where they were trying different things with various companies.

It’s very obvious when salespeople are really listening to you and provide details or information that relate to the different things you’ve exposed to them to through the process. When they don’t, you’re constantly having to remind them of things that were important as a part of the decision-making process because they just either don’t care or aren’t listening. Listening and being able to pull those things out at relevant times in the sales process is what differentiates them.

Jeremey: You made the statement that you know that certain people who, even if they’re not a natural salesperson, are able to succeed on the basis of listening and empathy and so on. It made me reflect on hiring because you have to hire at extreme scale, as you have done at Citrix and in your long tenure at Dell.

Do you have a philosophy about either hiring early career professionals or new college graduates and training them versus hiring experienced sales professionals?

Kurt: I think you have to do some combination of both. We have a great program to identify people who really do want to be in the sales profession. We actually seek out and try and hire the best salespeople right out of college that have stated that it’s their desire to go into sales. They have an energy and enthusiasm to really learn selling versus trying to retrain somebody or convince somebody that is just trying it because they don’t know what they really want to do.

We’ve tried to be much more specific about trying to hire people want to be in a sales role. We’ve had great success there. But if you have only that group of people, you don’t get this context of other companies and other techniques that come from people working in a variety of places.

So what we’ve tried to do is create a mix in our environment that allows people to bring different experiences and different selling environments and different backgrounds to the team. It gives us more diversity of thought around how we may approach different things. We haven’t done one or the other exclusively at any point in time. We’ve found that it’s good when you have a mix that has different perspectives.

Jeremey: With respect to hiring those experienced sales professionals, what signs do you personally look for that someone’s likely to be successful or signs that you should avoid somebody?

Kurt: It’s really important to do ongoing research and development of talent that you’d like to bring onto the team. I think we tend to get so skewed towards ‘when do I have an open headcount?’ If you wait for that, you’re kind of behind the eight ball at that point and you’re just trying to find the best person you can in the marketplace. If you have been fostering relationships over a longer period of time in different markets, then you have a pipeline of people to go to that you have either vetted over a longer period and gotten to know them or their work better.

Jeremey: We have listeners who are salespeople looking to become managers, managers looking to become VPs, VPs looking to ultimately become CEOs. As you reflect on your transition from manager to director to VP level in a tech enterprise company, what are some of the things that you’ve learned, or wisdom you want to pass on to the new generation of sales leadership?

Kurt: Hiring and getting the right team is at the core of your success. It is one of the most important jobs and one that we don’t focus on enough. That would be one.

The second one is the ongoing coaching and development that you’re doing for those individuals. A lot of focus I place inside my organization is on how much of that coaching is happening. In the day-to-day, one-on-one, how are they helping in not just a critical way, but how’s that manager getting in and actually working with the person? Are they showing them how to do it, or teaming them up with somebody who is a pacesetter?

If they don’t seem to respond as well from the coaching that the manager is doing, are there other people that can influence that? It could be peer-to-peer or on other teams across the organization. That one-on-one coaching has to be there on an ongoing basis, at least for the people that are going to perform at the highest level and be adaptable in today’s market environment.

There are changes happening in sales and in the business environment that salespeople have to be able to adapt to. You need people that are constant learners. Those two things have to come together otherwise it’s very difficult to be successful in a systemic way.

THERE’S A LOT MORE AFTER THIS! Listen to the full podcast for more on hiring and adapting to the new sales landscape.