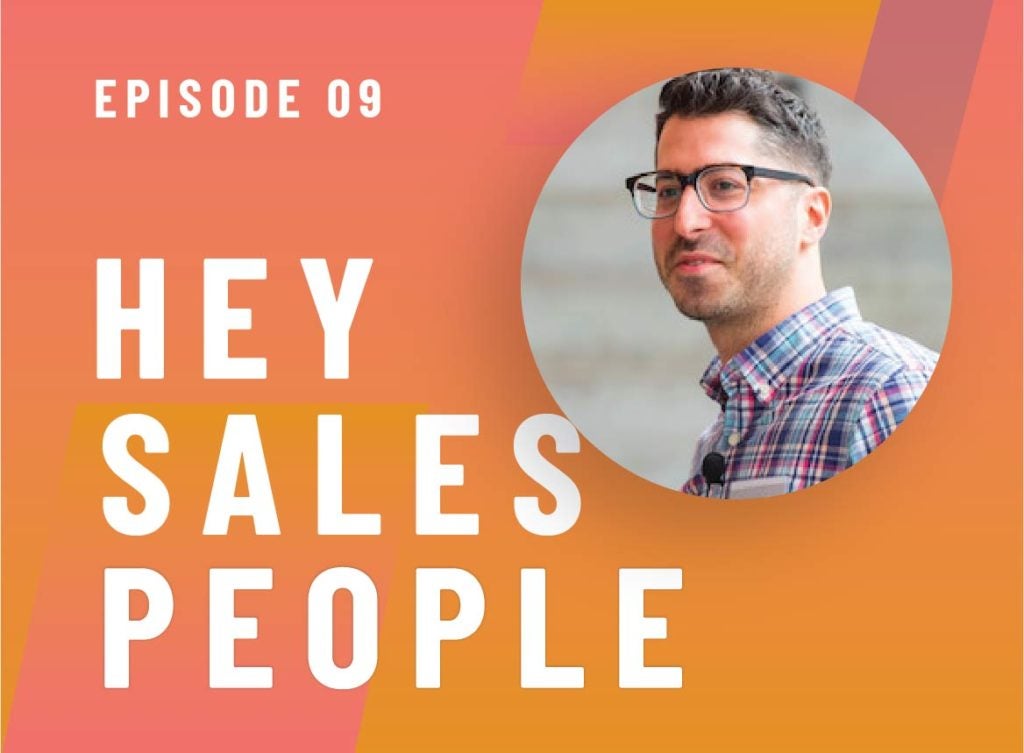 What do bartenders, Legos, and iPods all have in common? According to Rob Falcone, Director of Sales Engineering at Guru, they all can teach a valuable lesson about demos.

In this episode, Jeremey Donovan, Salesloft’s VP of Sales Strategy, and Rob walk through the entire demo process. They unpack everything from the importance of discovery to tips on how to successfully close. Using surprising analogies, Rob demonstrates that even though you may have the best product in the world, without a successful and customer-specific demo, it can be difficult to get prospects on board.

This episode goes beyond just providing actionable advice and gives you a front row seat to a three-minute mock discovery call between Jeremey and Rob. You will never view demos the same after this one! 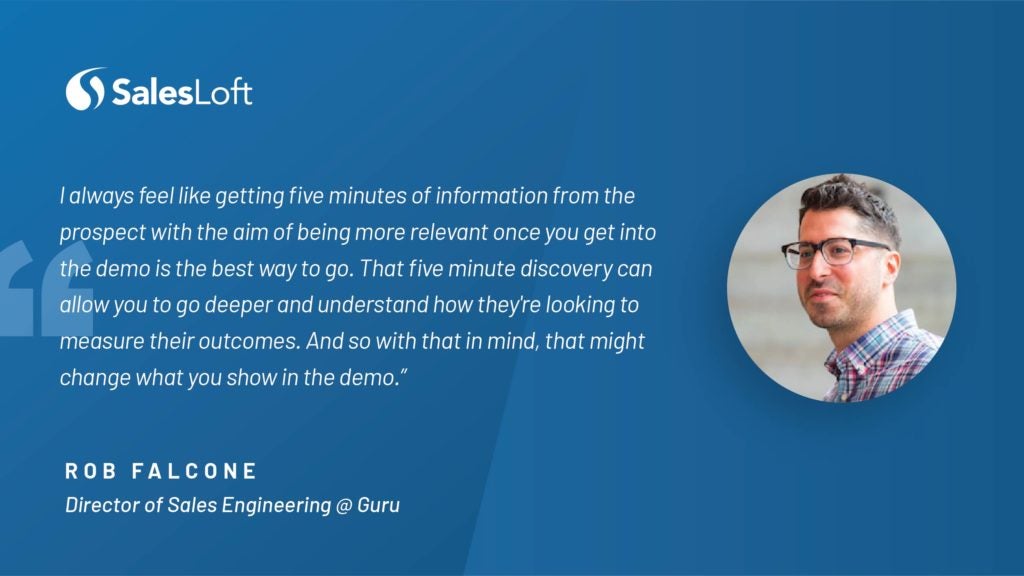 Jeremey: Welcome to the Hey Salespeople Podcast, where we focus on delivering immediately actionable best practices for sales professionals. I’m your host, Jeremey Donovan from Salesloft. Today, I’m very thrilled to be joined by our guest Rob Falcone. I actually met Rob recently at the Guru Empower Conference and we started speaking out on sales demos and other topics.

Rob is the Director of Sales engineering at Guru. He’s held a range of roles across not just sales engineering; he was an AE and a VP of Sales. So he brings a very broad perspective. Rob is also a super humble dude. He never mentioned to me until I sort of stumbled on it that he wrote a killer book called Just Effing Demo. You can fill in the blank on that one. It has, I think, 45+ reviews, most of them five stars. And well deserved. It’s a super quick read, which I love when practitioners write books. It peaked at number one on Amazon a little while back. Rob, welcome to the podcast.

Rob: Hey, thanks, Jeremy. And it was number one on the sales presentations list. Let’s not get too carried away. I’m sure there are some legitimate authors that would take umbrage at that but thank you.

Jeremey: Well, there’s the humility again. The first question I like to ask people is what is your favorite sales and/or leadership book that you’ve ever read?

Rob: I’d be hard pressed to say one. I’ll give you two from a sales perspective. I love Sales EQ by Jeb Blount. It really does go beyond the hype and the buzzwords around sales to get down to the actual human element. It’s really difficult and awkward to run a discovery motion. It’s really difficult and awkward to suggest next steps. I think Jeb does a good job of acknowledging that human awkwardness and gives some really actionable tips to get past that.

The second one is more of a management book. It’s David and Goliath by Malcolm Gladwell. I’ve always identified with underdogs – I’m from Philadelphia. It’s kind of in my DNA! So what I loved about David and Goliath was, it really goes into the idea that David didn’t just swing nothing and magically hit Goliath in the head. There really was a plan in place that he executed to take advantage of some of life’s weaknesses. For those of us in sales, it’s very much the same thing. Nobody’s going to go out there and wing it and be successful. This idea that we can be underdogs and find success by executing a great game plan really resonated with me.

Jeremey: One very much gets at the right brain, sort of human emotional side of success. The other one gets at the left brain kind of rational strategy side. Two complementary books, it seems.

Rob: Yeah, I guess that that sort of speaks to my path as well. I know you and I are both recovering electrical engineers. That’s the very rational process. But the reason why I never really fell in love with that as a profession was that the other side of the brain, the human part, always really excited me. So you’re right. It is a nice melding of two different sides of someone’s personality. More and more good sellers are able to really marry that freestyling maverick approach with a sound process that can be done over and over and over again.

Jeremey: Yeah, I couldn’t agree more. Sidebar on the electrical engineering because I don’t get to talk about that much. I actually decided I wanted to be a devotee when I was 10 years old, for no reason that I can possibly explain. I had no electrical engineers in my family whatsoever. I pursued that relentlessly. Then I was only for a brief time in the semiconductor industry a little over two years.

My reason for leaving was different than it sounds like yours. Mine was the product development life cycles were 18 to 24 months. I was just so impatient. I don’t know that I had discovered my human side yet, but I just had definitely discovered my impatient side.

Rob: Yeah, it’s crazy. I’ve been listening to another great podcast, Business Wars. They talk about a number of different companies and products that go to battle. The one I just listened to recently was about the rise of the PlayStation.

I remember when PlayStation came out in the mid late 90s. And they’re talking about 1988, 89, 90. And I’m like, good god, it was six years before anybody ever laid hands on it! The idea that some of these consumer products that we fall in love with are years and years and years in the making. I definitely don’t necessarily think that that patience is one of my strong suits and wouldn’t have the temperament to put up with that either.

Jeremey: The second thing I ask people is to get a little understanding of who they are and where they come from. Will you share with us the first thing you ever remember selling?

Rob: I’m sure that folks are probably getting a little window into me just by the nature of identifying as an underdog being from Philadelphia. We’ll go even more in the weeds. I’m from Delaware County, which is a pretty blue-collar suburb outside Philadelphia. So I kind of have a hustler’s mentality in my DNA.

The first thing that I ever sold were fake Oakleys out of the pro shop of the baseball academy I worked at, in my early teens. This was at a time when all the big leaguers started wearing Oakleys. No parent was going to spend $150 for their kids to wear sunglasses to baseball games that are going to break. So I took my dad’s credit card went on to the shadiest looking websites – I’m sure there’s someone driving a Ferrari around China called Rob Falcone Sr. right now because that identity has probably been stolen. I’d buy them in a dozen. It was $48 for a dozen and I’d sell them for 15 bucks a pop. The only real risk at the time was some the mom coming back with the O’s in her hand that popped off the glasses and demanding her money back. For a 14-year-old kid to go spend 48 bucks and make whatever I did – a couple hundred on each of those – that was pretty empowering.

That’s really where I always went back to this idea that the harder you work, the more you hustle, the more money you make.

That’s really where I always went back to this idea that the harder you work, the more you hustle, the more money you make. The entrepreneur side was identifying a need and helping deliver a solution. That’s from hustling fake Oakleys in Delaware County to selling software. It’s has definitely stayed with me.

Jeremey: I can imagine you with a card table and a suitcase.

Rob: You’re not far off.

Jeremey: The thing I’d like to start with is actually one of the things you started the book with. I really appreciate this concept of a center of mass demo versus a push button demo. Can you expand a little bit on that concept?

A good way to think about it is like Legos. If you were sitting down to build something out of Legos, you’ve got all these Legos in front of you. If you just start picking up the Legos and putting one here and there, it would take you a long time. It’s up to chance whether or not you’d ultimately get to where you needed to get to within that time.

If you have a framework – ‘here’s the base of what I need to build, and then I’m going to pop very specific Legos into very specific places.’ Now you can achieve an outcome within a certain timeframe. That’s center of what mass demo is all about. How do I take all the features, and really pare it down into what the most specific three or four are that align with what this audience cares about? That’s very different based on the audience, based on the deal, based on the scenario, and based on the person.

THERE’S A LOT MORE AFTER THIS! Listen to the full episode for the rest of the conversation between Jeremey and Rob.