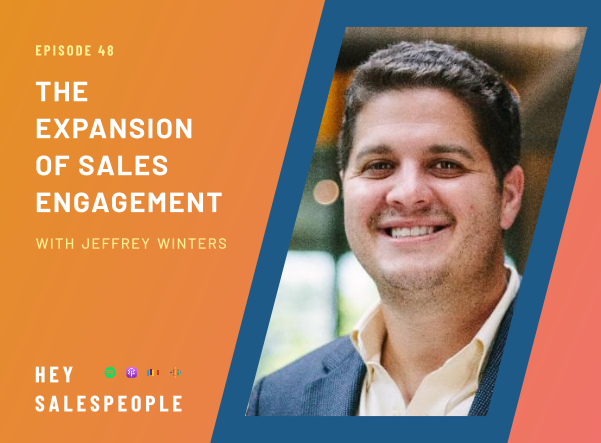 Jeff Winters may be the president of Sapper Consulting, an outsourced SDR firm, but that doesn’t mean Jeremey won’t take on him on in the great “Insource vs Outsource SDR” debate.

If you are an SDR, you won’t want to miss this episode of the Hey Salespeople Podcast. 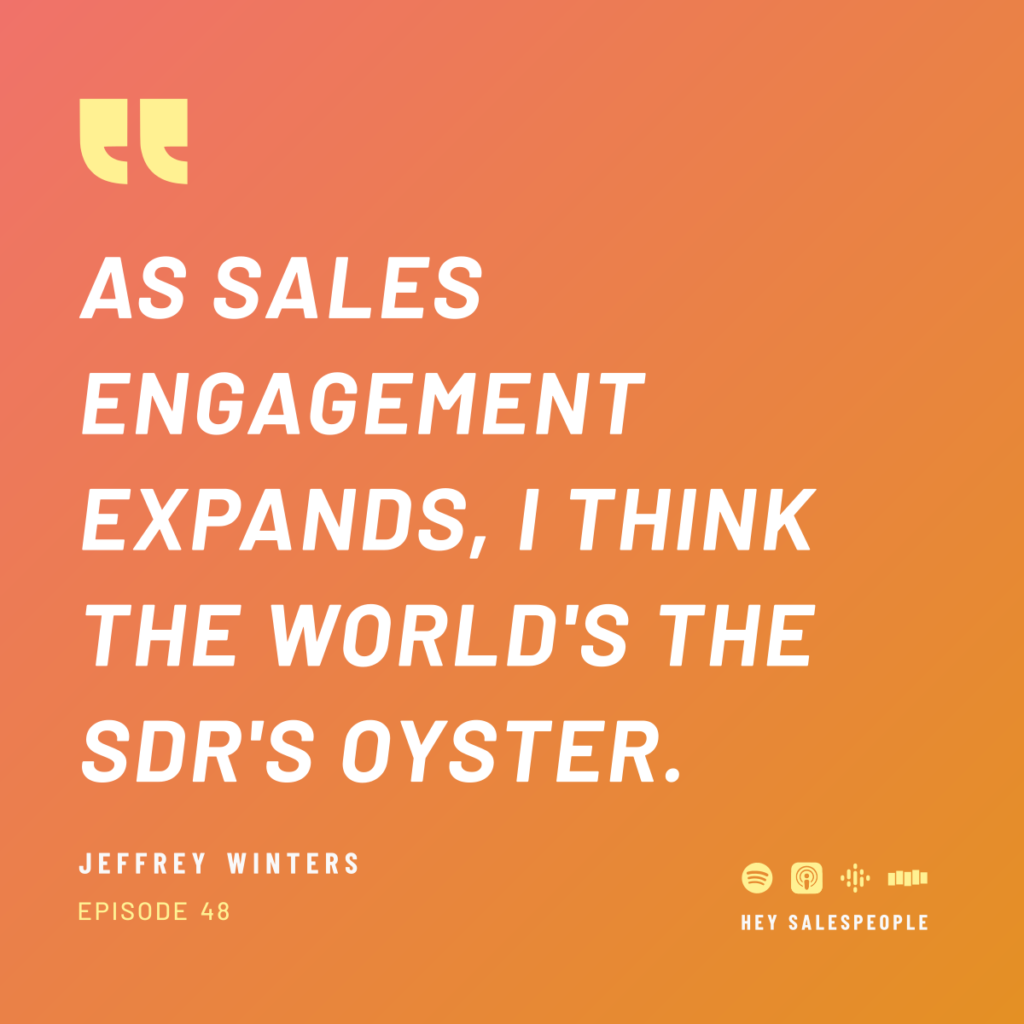 Vision for the Future of Sales Engagement

Jeremey:  We have these three topics that we’re going to go into today. I’d love to start with your vision for the future of sales engagement.

Because if you sort of look at the definition of sales engagement, its interactions between a sales rep and a buyer. And if you narrowly define that, as a salesperson and someone who has never bought your product or service, you get one outcome.

But if you start thinking about a sales rep more broadly, and you start thinking, Okay, anybody who helps drive revenue from a customer acquisition standpoint, retain revenue, or increase revenue on a per-client basis, if all of those people are quote, unquote, sales reps, and anyone who’s ever bought or might buy your product or services is defined as a buyer, then you start to think about sales engagement a whole lot differently

Jeremey: I am looking for opportunities to argue with you on this one, I don’t know that I argue I have that much of a disagreement with you. It might be about the pace of over which it happens and which pins fall first. Right?

So if you think about the funnel, you’re talking about, you know, very top of the funnel marketing automation. The next step is this burgeoning zone of companies that are managing your content for your salespeople. So I’d put the size mix and show pads and lesson leaves in that category. Then you’ve got what’s today narrowly defined as sales engagement, right in which the company I work for plays in, and then you’ve got a bit of a gap in opportunity management.

I mean, you could say that CRM’s are for opportunity management, but they’re much more of a system of record than a system of opportunity execution. And then right you’ve got the more narrowly defined Customer Success folks out there like Gain Site and others, but I think I’m with you on the convergence of these things.

Which one do you think is going to happen first, though, like, Where do you think the sales engagement folks like you know, like Salesloft and others, are going to go first?

Well, those customers are, I think, are now being thought of more and more quote-unquote, as buyers and you know, SAS, of course, has accelerated this, the model whereby sort of renewing your customers on a theoretically speaking on a month to month, you have to continue to earn their basis, month to month, quarter to quarter, year to year.

I think that’s what’s in part accelerating this. And I think success is already sort of there or getting there. Which discipline is going to more ubiquitously fall under the sales engagement heading? I think probably success.

The Insource vs. Outsource Debate

Jeremey: Let’s actually move on to the insource vs outsource and I will start with a bit of a provocative statement, which is that I am personally not a fan of outsource SDR. And I’m not a fan for a couple of reasons.

And one reason is that I feel that a large part of the ROI of having an SDR program is that you are training and developing people who will hit the ground running as AEs and I have done some back of the envelope calculation, you know that says that you get about an 80 to $100,000 benefit.

If you factor in hiring bad AE’s, underqualified AEs, who churn out and so on. So that’s one reason. And then the other reason has to do with kind of alignment and turnover and that sort of thing. So am I wrong or…?

Jeff: Yeah, I look at it a little differently. I think your first comment on creating a bench for AEs, that doesn’t necessarily jive for me.

I think you can have and I’m sure you’d probably agree with this to like super SDRs and I think that should be celebrated. And I think over time, that’s going to be more celebrated.

I largely think that SDR and SDR competencies are different than AE and AE competencies. I think that that’s great, and I think they can often be different people, not always, but often. So if we’re relying on our SDRs to substitute as our AE bench we might be making a little mistake.

Jeremey: You were saying that SDRs aren’t necessarily you know geared to becoming account executives. If not that then what is the career path for an SDR?

Jeff: Number one and this goes back to my sort of theory on sales engagement. I think SDRs are going to become more and more and more prominent within the sales organization and I think you’re gonna have lots of interesting layers of management for SDRs.

As sales engagement expands, I think the world’s the SDR’s oyster. I wish I was an SDR when I graduated from school, or at any point, I wish I’d had that job because I think it gives you such incredible exposure to go into any other area within the customer acquisition silo.

I wish I was an SDR when I graduated from school, or at any point, I wish I’d had that job because I think it gives you such incredible exposure to go into any other area within the customer acquisition silo.

So I think, I think to assume that SDRs automatically become AEs is, it’s just not the way that I look at the world. And I think it just also argues conceptually against the tailwind of separating scheduling meetings from closing deals.

Like we’ve had this evolution to SDR in some part, I think because there’s been this theory in the ethos that you should have your salespeople closing deals and your SDRs scheduling meetings. So if you’re assuming that that’s the case, I think it would be unwise to then further assume that the SDR is going to definitely turn in, like the AE is the obvious career path of the SDR.

I just, I don’t think that’s how it’s going to shake.