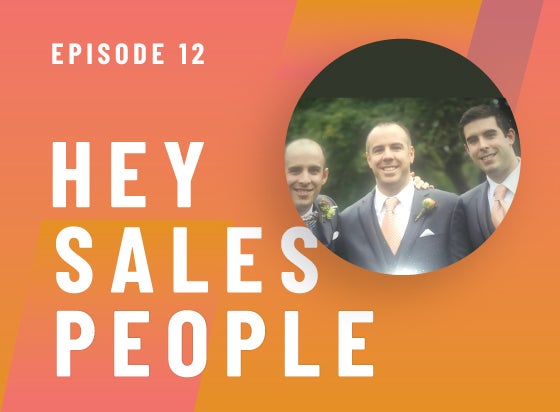 What are the odds that 3 brothers all end up in sales? How does that even happen? Jeremey and the McDonough Brothers – Jeff, Jim, and Mike – discuss their career journeys and what they have learned along the way.

Get ready for triple the guests, triple the actionable advice, and triple the fun in this unique episode of the Hey Salespeople podcast. The brothers dig into what they look for in potential new hires, what to do about bad hires, and the pros and cons of promoting from within. Don’t miss the piece of advice each brother would give their younger self or a new salesperson. 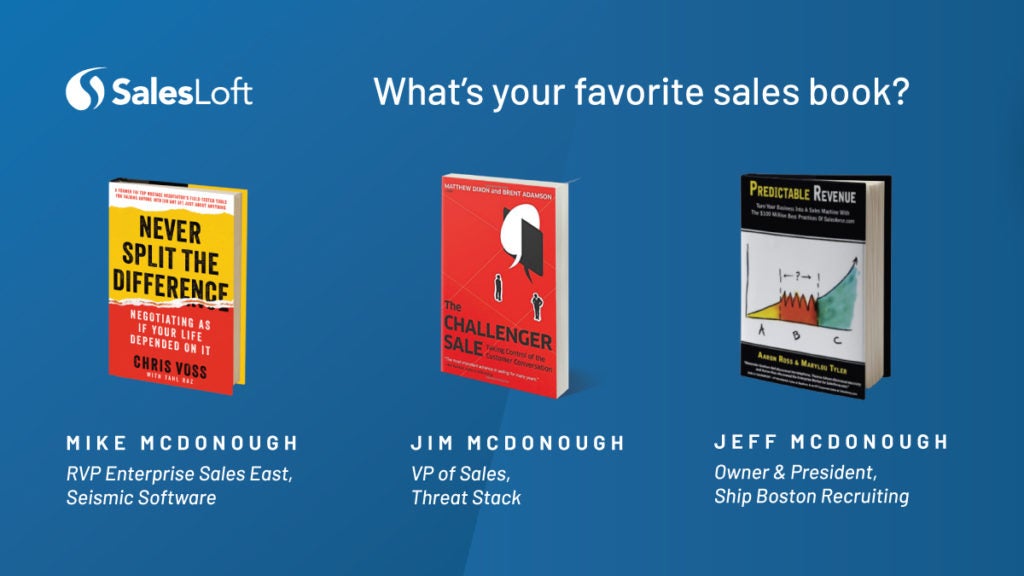 Jeremey: Jeff, you had the opportunity to recruit a hundred people at Seismic. When you were building the inside sales team, what do you look for when you are recruiting talent?

Jeff: For us at the Seismic early stages, we needed to find the hungriest people in Boston. We wanted to find people that would literally run through a wall. I mean, in one of my interviews I asked somebody, give me an example of when you’re competitive because everyone says they’re competitive.

He gave me an example when he fist fought his cousin at a party which was very minor. And you know, I’m laughing and I’m looking at him and he’s looking straight through me. He’s not laughing, he’s dead serious. I said, wow, man, I could see you running through a wall right now. He said, if you want me to try, I’ll do it. We want people that are that kind of hustle, that aren’t going to make excuses and can deal with rejection.

I said, wow, man, I could see you running through a wall right now. He said, if you want me to try, I’ll do it. We want people that are that kind of hustle, that aren’t going to make excuses and can deal with rejection.

So we interviewed to those skills. We tried to base the conversation and have them tell us stories about how they were that type of person. However, it’s different levels. So if they are BDRs, it’s about building blocks. To become a really good AE and inside sales closer, you need to have that hustle, you need to have that thick skin, but you also need to be naturally curious. If you’re over the phone closing, you need to learn everything that you can’t see in the room so you could ask the right questions. You’ve got to figure everything out and be able to put puzzles together. That builds the field sales.

You can’t be afraid to make a mistake either. If you’re growing a business like a Seismic or a Threat Stack or like the hundreds of companies in Boston that are growing really fast, you’re going to miss every now and then. But if you stay true to what you’re looking for and you don’t get gun shy, you can figure it out pretty quick.

Mike: I really liked the idea of promoting internally, so folks that have been in that BDR role or maybe they’ve managed an inside sales team. I always look at that team first. Now having said that, you can only have that if you’re building out a team from 5 to 10 to 15. One, it’s not scalable to do that. Two, you need folks that do have closing experience as well. It’s one thing to have people that know the product, the people, the process internally. Now we just have to work with them on some of those closing motions and how to sell and go deeper into accounts and those things.

Then there’s the flip side of bringing in folks that don’t know the product. They don’t know the people in the process internally, but they’ve got X amount of years of selling experience. What I’ve learned through some trial and error is maybe they haven’t been selling in my space per se, but ideally I would like to see folks that have been selling into sales and marketing before. What I’ve seen is folks that have been selling, let’s say into IT for a very long time, and then try to make a switch over to sales and marketing.

It’s just a really different type of conversation. Not to say that you can’t do it, but folks that have been calling in to CMOs and VPs of Marketing and CROs and Heads of Sales  usually make a much better transition to where I’m at.

Jeremey: There are people who sell at the 10k price point and then at 100k, 1 million, 10 million, etc. Do you try to look for people who have been selling at the price point or have you found that does not matter?

Mike: It doesn’t have to be apples for apples, but like there’s a big difference between a transactional sales model where you’re closing 20 deals a month over the phone on a credit card. That’s a unique skill set to have in itself that I’ve never done. Now having said that, there’s a big difference between saying, hey, I’m closing five deals all year, but it’s gonna be X amount of millions of dollars. It’s just a different skill set. I’m not saying that you can’t make a leap up or down, but it’s a pretty big gap you have to cover when you could say, hey, we have two call closes opposed to a nine month sales cycle.

Jeremey: The cost of a miss is considered to be very high. How do you detect a bad hire?

Jeff: I think if people are honest with themselves, you know pretty quickly. If it was a miss, you know. We only had a couple misses at Seismic, but we knew right away. I think the cost becomes expensive when you don’t act on it when you’re afraid to address it.

If you’re afraid to make the move and you just carry them on for too long, not so much their output because you’re never going to get a lot of output from a bad hire, it’s the other players that you have around them that suffer. They see you carrying dead weight. It kills the morale, putting people on long plans that they hit once and you ended up having them for 60 days and stuff like that. It’s just bad for the locker room, so I think the costs from a bad hire can be mitigated a little bit if you can act on it pretty quickly.

Jeremey: Jim, who’s the best hire you’ve ever made and what made them so special?

Jim: The best hire I ever made was a woman named Pia Heilman. I hired her as a BDR at Mashery, the API management company that I worked for based in San Francisco. She came in as a BDR. She’s just like Type A personality. Somebody who just constantly pushing herself to get better. Fast forward seven or eight years and she was actually Director of Sales for me at Threat Stack. I’ll probably be working for her someday if she’ll hire me.

You know, she’s one of those people that every single person that interviewed her was like, okay, what do we have to do to get her on board? She was actually already in a closing role and we convinced her to come on as a BDR cause we had a really quick path to closing. So she came on, took that risk, and her career has just taken off since.

Jeremey: We actually looked at 1,500 SDRs who got promoted to AE at various companies and we actually found that the signals are that the person was in a closing role and willing to take that step back and do a BDR for the fast path and maybe they got a closing opportunity very early in their career and they wanted to move up and do a better company that may be sold at a higher price point. I presume that was what she was after.

Jim: Yeah, that’s exactly right. She was in more of a kind of high velocity inside sales model where you hire somebody that has little to no sales experience and they come in as a closer right away. You know? I think that’s great and that model works, but I do think if you want to be truly great in this profession, putting a year in or even just six months in at that SDR level, there is nothing better than that. You really learn how, not only how to sell, but just to be able to deal with the grind that is sales.