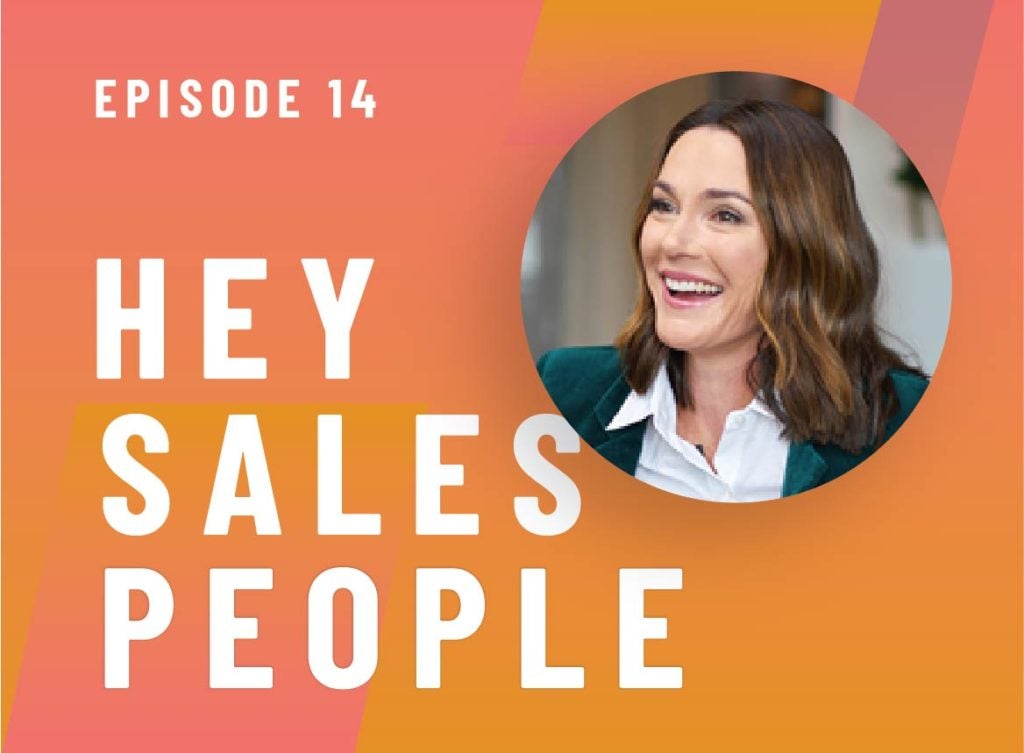 Christina Foley has been in sales for almost 20 years but her dad still asks what her sales forecast is.

From starting her career as a Sales Rep for Salesforce to now working as the VP of Commercial Sales for FireEye, Christina has witnessed firsthand how sales has changed and been able to adapt in order to keep winning.  In this episode of the Hey Salespeople podcast, Jeremey and Christina discuss the importance of leading with authenticity, empathizing with your customers, and value selling. Listen for Christina’s actionable advice on everything from storytelling to forecasting. 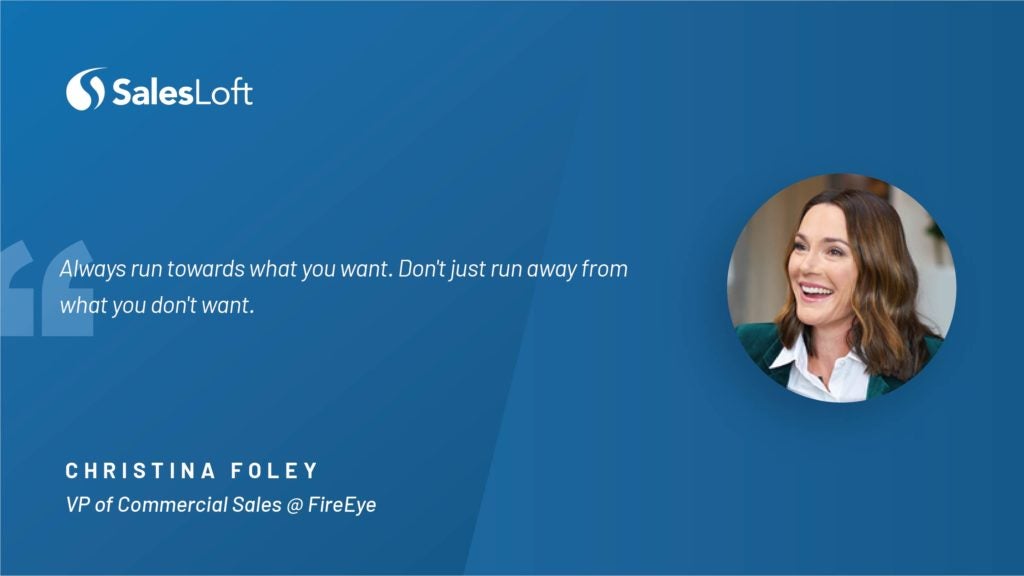 Jeremey: Even though salespeople have been taught to value sell, they are almost all still feature selling. Has that been something you’ve had to wrestle with?

Christina: That was probably one of our biggest struggles. And what we’re seeing is that FireEye specifically is very technical. We have lots of products around how we secure your network, email, endpoint, etc.  Especially if there’s been a breach and it’s very easy for the seller to get into bits and bytes.

The reality is, you need to zoom out a little bit and understand the big picture. What are your goals? What are the outcomes you want to see? And don’t get technical.

If I look at the entire sales team within the commercial world at FireEye, those that are having the most success are the least technical. We’re helping people understand larger business problems that can lead back to discussions with the board that will ultimately help companies save money.

Those are the conversations people want to have right now. We had a very, very difficult and intensive transition from really wanting to get technical, because we’re talking to technical buyers oftentimes, and keeping that conversation directed at the outcomes.

Jeremey: There are two things as I reflect on what you were saying that I think are so important. One is you were talking about the fact that the sellers basically have to take the time to build these partnerships, deeper partnerships with people.  I had another conversation with a sales leader who was saying that one of the major changes that have happened as you go from transactional to enterprise selling is patients can’t rush the deal. The buyer needs to trust that you’re the right partner to help them solve those critical business issues.

The other one is that moving from feature to value-based selling. I think one key thing is just to keep tying back to what the business objective the prospect had stated was.

Christina: You hit the nail on the head.  Also, be good storytellers. Storytelling helps people feel like we’re speaking to them and have empathy and understand their situation when we’re talking about specific proof points. Where it’s happened before, where we’ve worked with customers that look and act and feel similar to the prospect we’re talking to.

We’re helping them understand, ‘this was your before, this is what you’re after. It looks like these are the goals that we’re going to get to.’ This really builds accountability on a timeline perspective.

However, it’s on their time that they’re going to make the decision. We’re just helping them feel empowered and have all the information in front of them to make the very best decision. It’s about being a partner. 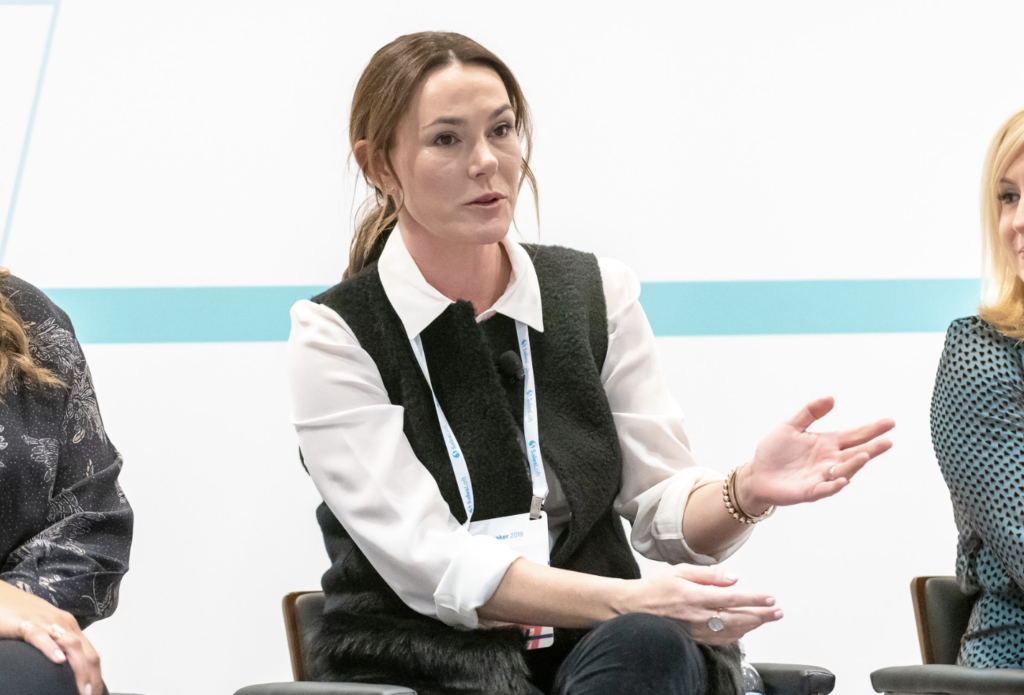 It’s on their time that they’re going to make the decision. We’re just helping them feel empowered, and have all the information in front of them to make the very best decision. It’s about being a partner.

Jeremey: Getting deeper into the data, one of the biggest data-centric challenges that sales leaders face is forecasting. What are your thoughts on forecasting, and what tricks and tips do you have for people on how to improve at that forecasting?

Christina: I personally am constantly looking at ways that I can improve my team’s forecasting ability. Everyone always says it’s an art and a science. It’s an art and a science to getting to know your individual reps and how they forecast and stay close to the biggest deals. That’s sort of a very tactical thing that I think is really, really important.

The one thing that I’ve made a commitment to doing is being very consistent with my forecasting methodology for at least the fiscal year for FireEye. So in this case, I was very specific with the team that we were going to make some changes to forecasting. That I would be consistent and not make any changes throughout the year.  That was really important. It’s easy to overcomplicate how people forecast.

Christina: Yes, and just what it means. So for FireEye, for example, this year, we had something called closest to the pin commits. If you are conservative and know that you are going to get to this number to commit, you can roll this number of the board, no problem. The CPP is where you’re saying, I think we’re going to land here. Don’t roll this to the board. But you can probably count on me for the number. We made that change at the beginning of the year. It’s pretty simple. But I told my guys “listen, we’ll run it through for the year. If it doesn’t work, we can give that feedback.”

There are so many different ways that people change their forecasting categories in the way that they roll them up. And we use a tool that helps us have a little bit more predictability in the numbers we’re calling, which also helps.

Jeremey: Just reminds me of a conversation I had with another sales leader Larry D’Angelo, who runs sales over at LogMeIn. Now, he had this one kind of trick that he uses, which is there’s a checkbox that gets refreshed every week. So the sales rep needs to go in there and either check it or not. The checkbox is basically asking, are we winning? Is that’s checked? Then the deals in the forecast at whatever probability. If that’s not checked, then it’s not out of the forecast.

A lot of reps are afraid to ask that question directly. And I think it’s a super valuable thing to do. And if you have a champion and you have the trust built, that is sufficient, that is the kind of deal that you’re likely to win, then you should be able to ask that question. And I know, as a buyer, I will candidly tell people, it’s down to you and whatever other vendor and here’s my evaluation criteria is where you stand. Like, I think buyers are pretty transparent about that.

Christina: I’m very sensitive to that. And I am like you were I’ll tell people that same exact thing. Because whether it’s because I’m a sales leader, and I see my sales team, and I have some empathy for them, but I also think it just helps people. I’m not here to waste anyone’s time.

One of the things that I asked all of my sales leaders when we’re on a forecasting call is “do you have access to the economic buyer?” And I know you think everyone’s going to say yes, but the second they say, “No” I’m like, we don’t have a deal. This deal shouldn’t even potentially be in the forecast.

I have a set of questions. That kind of me gives checks and balances on the validity of an opportunity and whether or not it should be in the forecast, especially for deals over $100,000. If we don’t have access to an economic buyer, the likelihood is that deal happening within a 30-day window is unlikely.

Jeremey: If you could go back and give yourself a piece of advice as a sales leader when you were starting your career managing teams, what piece of advice would you have given yourself?

For the other, I’m going to use a very personal experience. I was coming into the role as a manager, filling a manager’s position that was moving on to another role. And this guy, Jeff Sinclair, was amazing. He is one of the best leaders I’ve ever worked for. I felt like I needed to come in and be him and do everything he did. And that just doesn’t work. There was no authenticity to the way I coached and the way I provided guidance because I was trying to be someone else.

So if I was talking to myself 20 years ago, I would have said, lead with your own authenticity. That really started to come out after I had a good look in the mirror and said this isn’t working. I can’t be Jeff Sinclair.

I would say those two things are the most important. And then I would say, what I’ve adapted to and what I say to my team at the beginning of every year and as frequently as possible is, I work for you, you don’t work for me. As your leader, I am responsible to make sure you’re successful. That ownership and responsibility rests with me and I take that to heart.

THERE’S A LOT MORE AFTER THIS! Listen to the full podcast for more actionable advice.