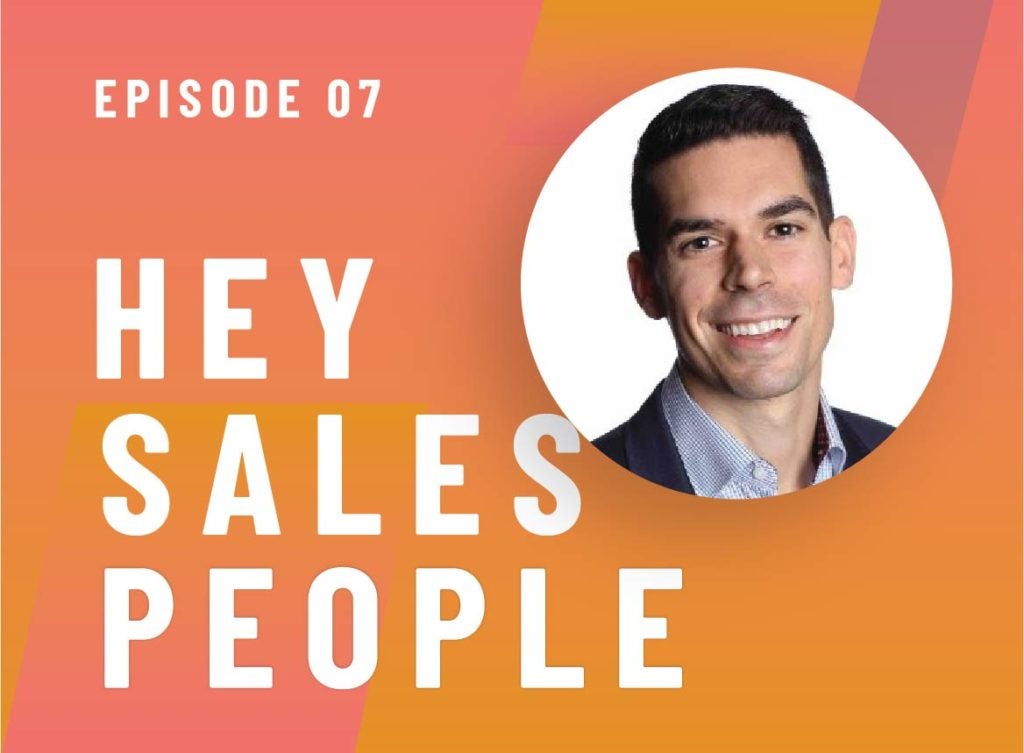 Remember the people that came to your door selling scissors you could cut a penny with and knives that could cut through basically anything? In this episide of the Hey Salespeople podcast, Salesloft’s VP of Sales Strategy, Jeremey Donovan, talks with Michael Arrieta,  who started his sales career going door-to-door selling those sharp objects.

Less than 10 years later, Mike serves as DocuSign’s VP of Communications, Media, Utilities, & Energy.  In their conversation, Mike and Jeremey talk about what that first sales experience taught him, and how it led to a role as the Chief of Staff at Dell. You won’t want to miss these lessons in navigating your career ladder!

The duo also unpacks Mike’s “we’re on the battlefield together” approach to sales leadership and how he identifies the grit he learned from selling knives in potential hires.  Which leads to Mike’s success strategy for moving from mid-market to enterprise… it’s all about who you hire! 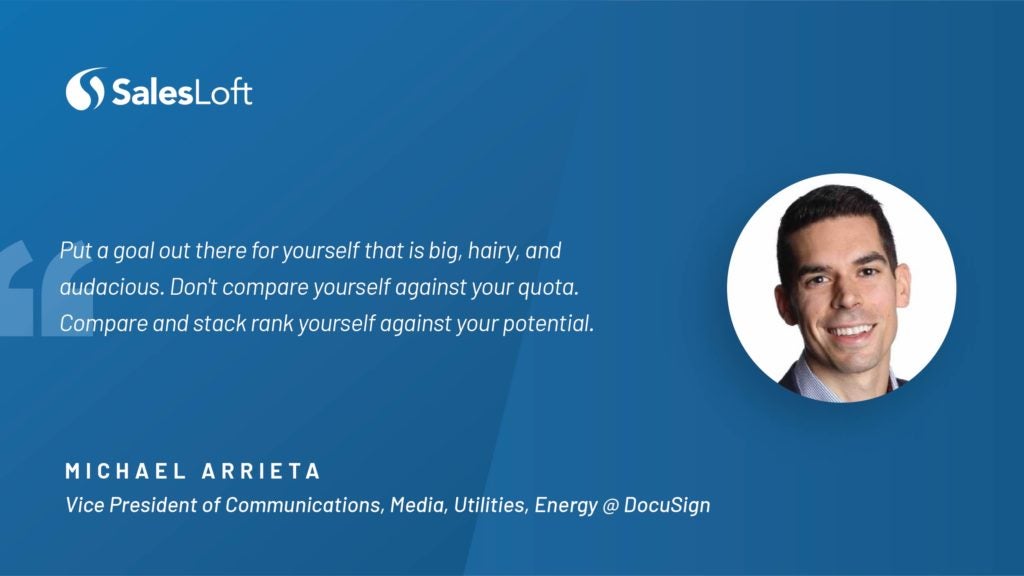 Jeremey: Welcome to the Hey Salespeople Podcast, where we focus on delivering immediately actionable best practices for sales professionals. I’m your host, Jeremey Donovan from Salesloft. Today it’s my pleasure to welcome our guest Mike Arrieta, who is VP of the telecom media and utility sector at DocuSign. Welcome, Mike.

Michael: Thank you, Jeremey. Looking forward to our conversation today.

Jeremey: So the first question I’d like to ask you is, what’s your favorite sales or leadership book of all time? And what was your key takeaway from that?

Michael: For my favorite leadership book in terms of what I’ve gained the most value from, it’s actually the Bible, predominantly because of the Golden Rule – treating others the way that you would like to be treated. It’s packed with lessons about how to treating others, loving, leading with humility, working with excellence, etc, etc.

Jeremey: You mentioned the Golden Rule. I definitely try to live by the Golden Rule. I once read a book that talks about the Platinum Rule, which was ‘do unto others as they would have done unto themselves’ – which my wife reminds me of a lot. It’s about making sure that I am not just thinking about how I would want things to be done, but what she would want and what others would want. I think it’s a really good rule.

Michael: Another way to look at it is team over self or others over self. So it’s not thinking less of yourself, it’s just thinking of yourself less.

Jeremey: Do you use different language at work? Do you call people, leaders, bosses, and managers? Is there a particular language you prefer to use?

Here’s what that looks like. We’re on the battlefield together. I’m behind you anytime that you need me to be. Or I’ll be in front of you anytime you need me to… but I’m at your service. Just tell me how. If it ever feels like you are working for me, it’s probably because you’re not doing your job to the best of your ability. Hopefully, out of our entire relationship, 99% of the time it feels like I’m working for you versus the other way around.

Jeremey: On that note, have you ever hired somebody and then found out that they kind of had that control bug in them? That they were lording themselves over their people?

Michael: There’s a company out in Silicon Valley, whenever they hire leaders, prior to actually their start date they have them come in for kind of a trial period to see how exactly they work. It’s a team environment, so they see how they actually lead a team and if are they a servant leader or not.

We don’t go through that same type of process at DocuSign – although I see kind of the benefit of that – nor do we go through the same type of process at our charity, New Story. So many times, you just take the best leader that you could find and through the multiple types of interviews that you’ve had with that candidate, you try to use your best judgment. Sometimes you hire somebody that is more of a micromanager or a hands-on type of manager.

One of our core values of our team is open, direct, and honest communication. We love productive conflict. We thrive on it. Our managers know that if you’re doing something that needs improvement, we’re going to talk about it very, very quickly. We’re not going to allow it to get moldy in dark corners; we’re going to bring it out into the open as quick as possible. If we do see that a leader is a little bit more in control than they ought to be, we’ll just work through that from day one.

Jeremey: If you can remember the first thing you ever sold, what was it and what was that like?

Michael: The first real thing I sold was when I was 16 years old. I started selling Cutco knives. A lot of people in the United States are familiar with Cutco knives because you always have college kids coming to your house to sell you knives. That was me! I started in high school. It started just selling to all my friends’ parents in my junior year of high school. That slowly built to asking those friends’ parents for referrals of other people they knew in their neighborhood or at work and then it continued to snowball.

Jeremey: I think I remember going to flea markets when I was a kid and they would always be the Cutco knife stand set up. Do they train you on the routine where you’re supposed to slice the piece of paper? And slice the tomato?

Michael: Absolutely, yes. There’s a training where they teach you how to cut the penny with the scissors and they teach you how to cut the rope with a specific knife and everything. It’s a pretty hard thing. Thousands upon thousands of people go through it per year. The drop off rate of people that even sell is $1,000… I think like 90% don’t even sell $1,000. It’s a pretty difficult thing to do.

Jeremey: I bet that 90% ends up with knives for life and their cupboard.

Michael: They do. You have to start off by buying the set that you demo with. A lot of people out there still have their demo set, which actually ends up being a great investment. For me, I had to find a way to be successful at it due to some of the situations of our home front that I grew up in. It was a neat journey for me.

Jeremey: As you reflect on selling knives, what was the biggest thing you learned about sales and that job?

It all started with me believing in my self, that I actually had the capabilities, the know-how, the intelligence, the drive, the grit to actually do what could be done. That was the big thing – that it all started with the belief in myself.

That was the biggest takeaway – that you can accomplish anything that you put your mind to, as long as you do the work that’s necessary in order to get there.

Jeremey: When you’re hiring for people now, is that something you still look for in people? How do you test for it?

Michael: Absolutely it is. I’ve hired many people that have had the enterprise sales pedigree and a long history of being extremely successful with very high compensation. During those interview processes, sometimes in the early days, I would forget to look for that drive or that grit piece. What I came to find out is that, if they don’t have that, especially in our hyper-growth business of DocuSign, they’re just not the right fit.

Jeremey: There’s some great research that shows that the grit factor really drives success in the job. It has been studied, I think, by Angela Duckworth, and others, as well as the factors of intelligence and conscientiousness. Those things really resonate.

Jeremey: When you ask enterprise sales people in an interview to demonstrate a deal that they struggled with, the good answer is, “I struggled with this deal, and then I won it.” Have you ever had a bad answer to that question?

Michael: Yeah, a lot of times. It’s just a very shallow, quick answer. I just always respond back with, tell me a little bit more about that. A lot of times, you’ll see that the story started out at 10,000 feet high. Many leaders who are interviewing, they’ll just take that answer and go to the next question.

What I really try to do is say, “no, walk me through specifically what happened.” So rather than just accepting the 30,000-foot example of how driven they are and how they demonstrated their grit or their pursuit of excellence, I try to get to the specific, nitty-gritty examples. You can quickly determine how accurate and real a story is to measure their drive.

THERE’S A LOT MORE AFTER THIS! Listen to the full episode for the rest of the conversation between Jeremey and Mike.