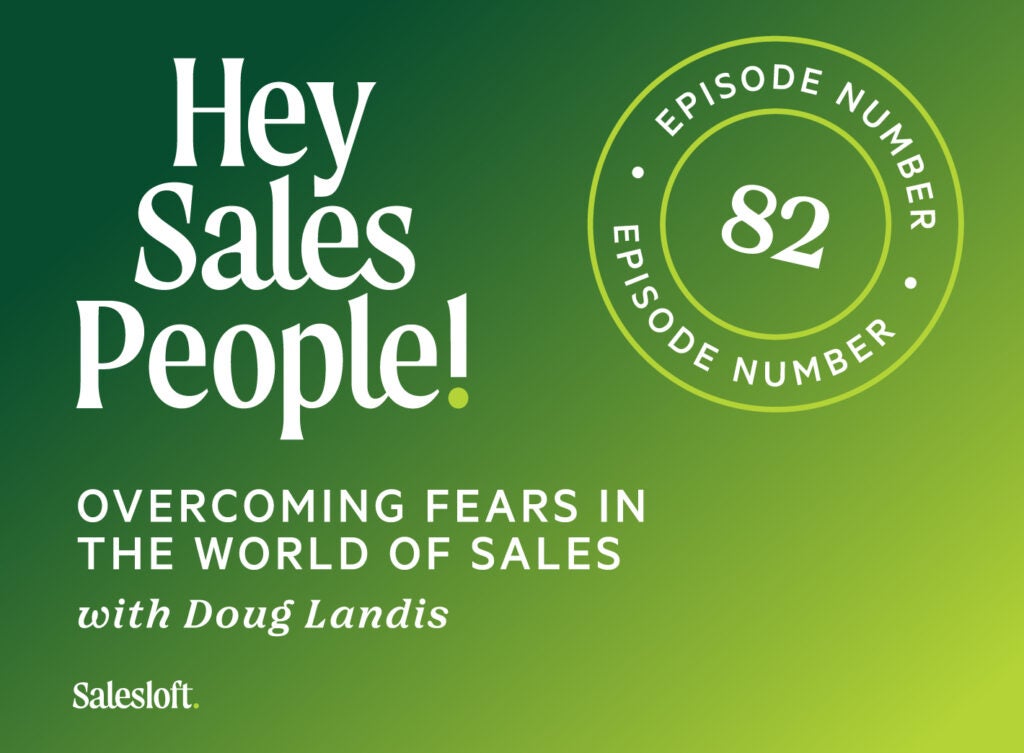 This episode of the Hey Salespeople Podcast brings you a very special guest host: Sydney Sloan, CMO at Salesloft!

Sydney speaks with Doug Landis, a growth partner at Emergence Capital who lives and breathes all things sales and go-to-market.

We learn why it’s important to be empathetic to whoever’s on the other side of the table, how to focus on what you can control during out-of-control situations, and how to overcome fears in the world of sales… especially during times of uncertainty. 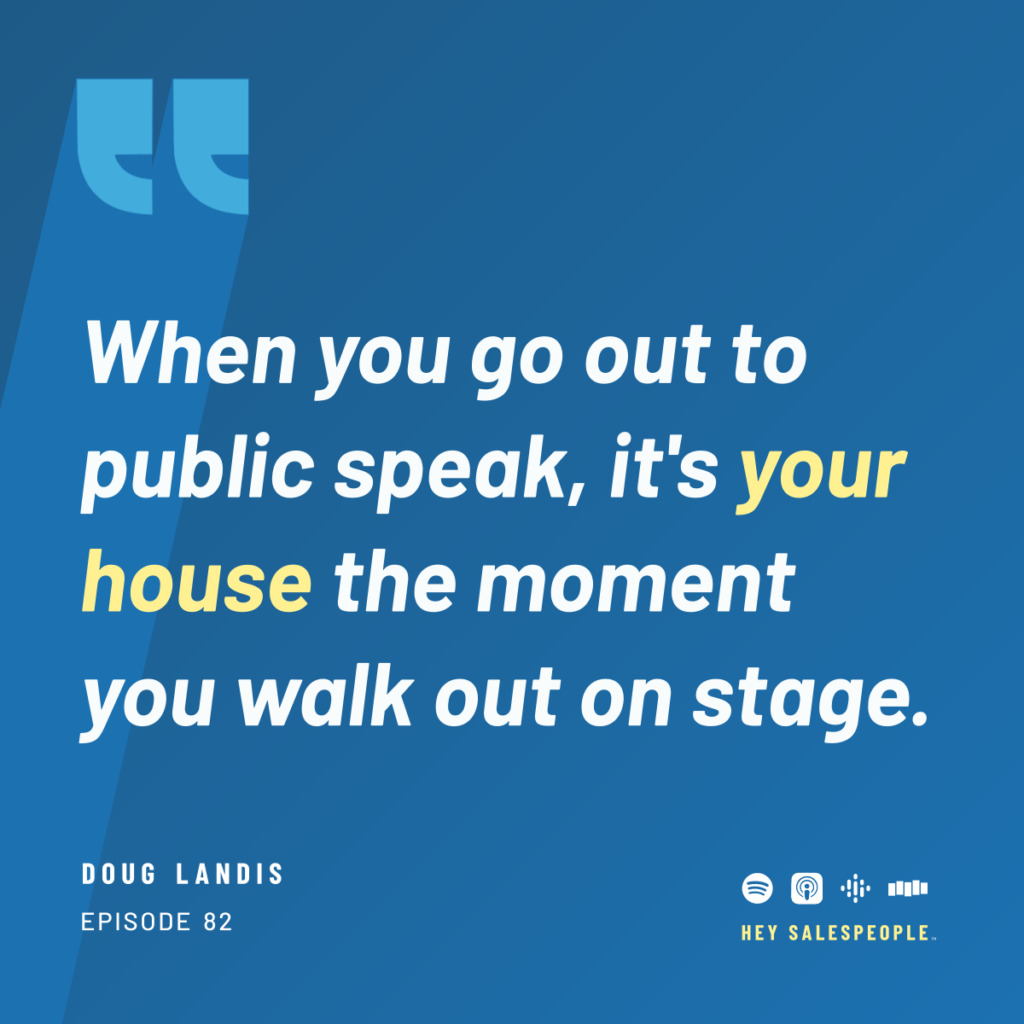 Listen to the full episode here and keep reading below for highlights of the show:

Sydney: A lot of times where I try to focus I’ve been coached on is having that visualization technique where you actually practice and you visualize everything going right, you can train your brain to be ready for that.

I think the other thing too, that a lot of times people forget just taking the time to take a breath.

Doug: The other thing and this, by the way, is what I still do today. And I’ve been, you know, facilitating events for 40 years now, I practice in front of a mirror. I look at myself in the mirror, and I talk to myself as if I were talking to an audience.

And it’s really awkward and uncomfortable. My wife laughs at me about it. But it’s how I practice engaging as if I were having a conversation with somebody. And the thing to remember when it comes to public speaking is: Your job up there, your number one job is to elicit a positive response out of your audience.

Now, if I’m present, I’m paying attention to the reaction that I’m getting from the audience, and therefore I can modify, but fundamentally my job is to try and elicit a positive response.

Hence the reason why you know people who just try to put things into rote memory and try and regurgitate exactly what they memorized. It’s really difficult because sometimes you’re too focused on just spewing out words and you’re not actually focused on the connection with the audience.

Sydney: For those of us that are competitive and grew up playing sports and don’t like losing, does that just make you work harder, so you are more prepared, it goes back to that word preparation to win the next time and welcome to learning I think to like don’t beat yourself up if you did everything possible.

If you gave a great experience to that customer, and there was just something that you couldn’t personally overcome. How might you approach the next customer differently with the desire to continue to improve and win. So let’s translate that a little bit because I think a lot of people in the sales profession, you know, have that natural competitive spirit. A lot of us have also played sports, you’re an athlete.

Now you do soccer and you’re just recently watching your favorite team, big tennis player, I understand the Emergence team is big tennis, pounds all across the board and surfing. Which of those three sports has taught you the most about addressing fears and dealing with pressure?

Doug: For me fear when it comes to sports, specifically of the sports that I like, is surfing without question. And it’s actually connected to why we tend to get afraid of things because I don’t control Mother Nature.

I can control my environment if I’m playing tennis because especially it’s me out there. And if you know I’m in soccer, it’s a team sport, but it’s surfing it’s me in the ocean, and it is a variable that is so unpredictable, but I’ve gone out in situations that were really dangerous, stormy and I was the only one out there and I ended up like a mile and a half down the beach up against the rocks. And I thought I was going to drown.

So I didn’t do a very good job of kind of assessing my environment. But you know, in those other situations, the key is to, as you were saying, it’s just kind of… breathe.

Sydney: After that time where you got pushed up against the rocks, like, how did you prepare yourself for going back out?

I learned from that I was like, I, I need to make sure that I’m just smarter about the environment that I’m choosing to go out in, really, at the end of the day. And also, I’m also totally aware of the fact that anything could happen.

It could be a two-foot wave, but I could fall off and the board hits me in the head, I’m knocked unconscious, anything can really happen. I’m trying to create an environment where I have more control of the things that are controllable. Right, but again, as I mentioned, Mother Nature, you never really know but that’s part of the fun of it.

Sydney: is there a sales story that you can tie this back to? So how do you gain control when you feel like you’re not in control?

Doug: Well, you know, it’s interesting you bring that up because there are direct parallels, right? So one of our companies just did a really big deal with Slack. I was largely involved in that deal. And I will tell you, I know a ton of people over at Slack, a lot of people at the executive level all the way on down.

The crazy thing was, I was nervous about the deal because there were so many things that I felt like were out of our control. They had created an environment where they were controlling the process so much, it was really difficult for us to get you to know, the right level of information to where we would feel comfortable.

To be honest, it wasn’t even my deal specifically, if it was my deal I would have been way paranoid, but even as somebody is somewhat of an outsider, I was still a little paranoid because typically in a sales environment, if you follow the process, you know you feel more comfortable and confident. You got to be careful about getting overconfident because that’s usually when you miss something.

But in this situation, there was a They were just withholding so much information that it was hard to get comfortable. And so anything could have happened, literally out of left field. And that’s one of the things that I try and coach a lot of our companies on is, as a salesperson, be paranoid, and ask yourself this question like, why am I going to lose this deal? And you should always be asking yourself that question, you should always be challenging yourself on the fact that you could very well lose this deal.

And so you should understand why it’s possible. And then I think the other thing with that, especially in the world of sales, is do your best to be empathetic. Because sometimes, as a buyer, sometimes there’s a ton of stuff that’s out of our control, right? All of a sudden, we’re ready to sign on the dotted line. And the CFO comes in says, Nope, sorry, time out, not spending a thing right now, because guess what, we’re just about to go report our earnings to the analysts.

And you know, we can’t spend any money for at least a month. Yikes. I didn’t see that coming. Nobody say that coming. I think as a salesperson, it’s really important to be empathetic to the people on the other side of the table. And then of course, do your best job to try and anticipate what could potentially come up, because things go sideways.