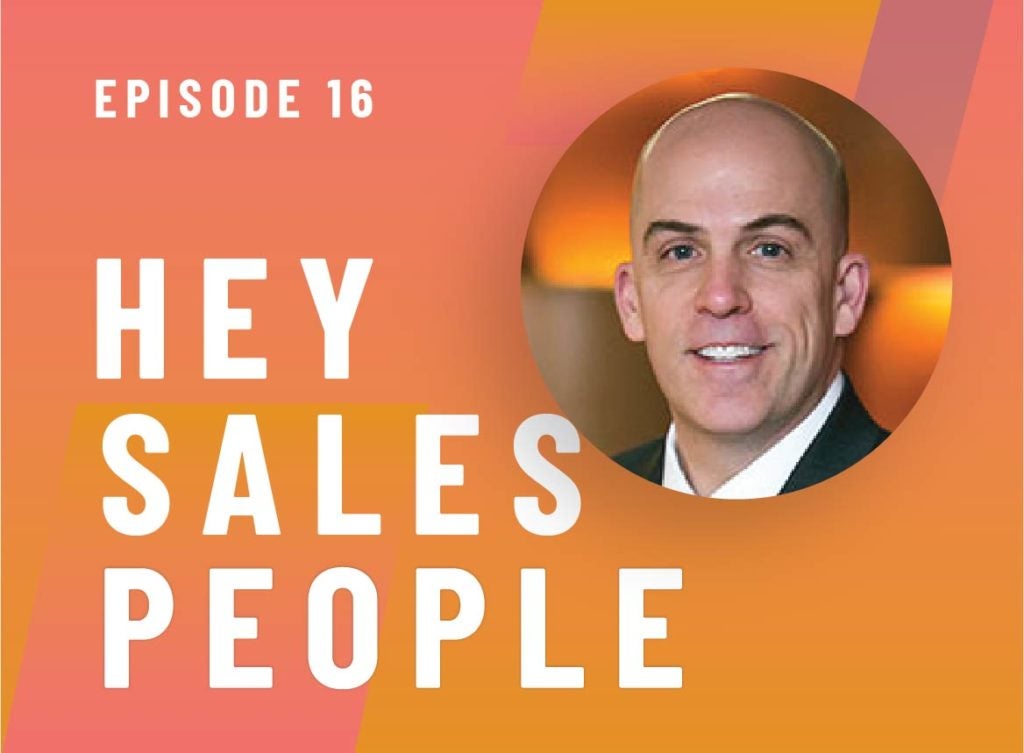 What you sell – your product – is a primary differentiator.  Or is it? Anthony Iannarino would argue that it’s not.  The outcome, or the strategic need to do something different, it was will cause someone to change.

Jeremey and Anthony go deep into his four levels of sales in this episode of the Hey Salespeople podcast. Learn why level 4 – the trusted advisor – really is the holy grail, and the reason you still need the prior 3 levels. They also talk about the unusual job Anthony had in high school… lip syncing Alice Cooper. 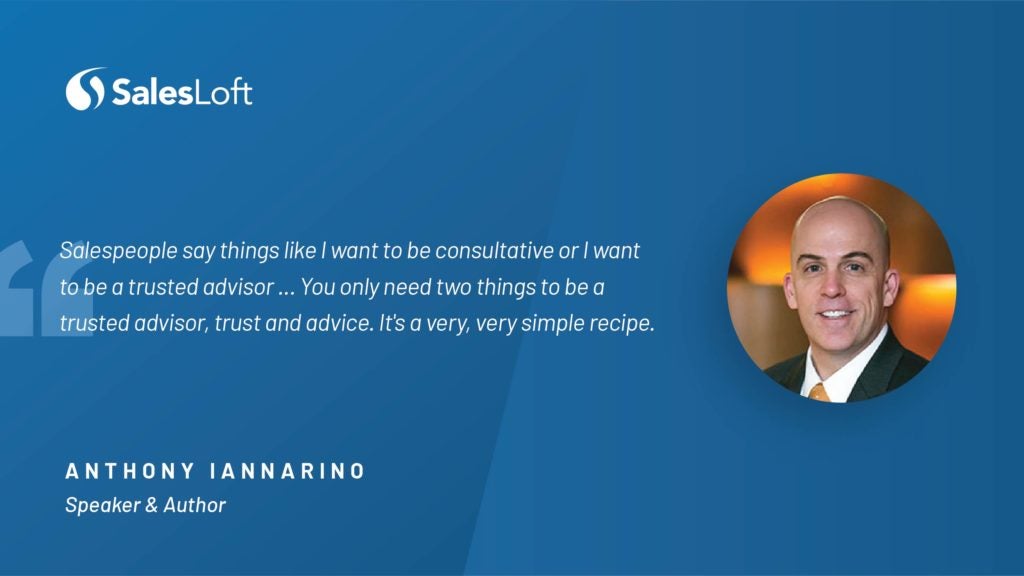 Anthony: I was trying to explain to people how you have to think about being strategic and what people are really trying to buy. In the first book I wrote, I quoted a Harvard professor named Theodore Levitt. He said people don’t buy drills, they buy holes. If they could have the hole without buying the drill, they’d just take the hole. That always stuck with me as a really, really interesting observation – that they don’t really want to buy a drill.

It doesn’t matter if your drill is yellow, and it doesn’t matter how many different bits come with a drill or anything like that. They want a hole. Why do they want the hole? Because they’re trying to decorate their house. There’s a strategic need that you’re trying to help with.

It’s a difficult concept to try to explain to somebody that the product doesn’t matter. They say ‘But I have a really good product.’ Well, yeah, a lot of people have a really good product. No matter what your product is, other people have products that are good too. So that can’t be the primary differentiator. Apple has some good differentiation but in an audience of 500 people, you know, a couple hundred of them are going to be carrying Samsung’s because Samsung makes a good phone too. It depends on what you believe that product does. So that’s level one.

Jeremey: I’m thinking about different sellers in terms of their level of maturity. On one end of the spectrum, you’ve got the person who’s been selling into the industry for a decade or more. They know where the value lies with their product. Contrast that with somebody who’s either new to a company or new to an industry. How can that new person become a level 4 trusted advisor or strategic partner?

Anthony: It’s not as hard as you think it might be. First of all, if that person is new in their company, information about what those strategic outcomes are and how you enable those exists inside the four walls of your company. You just have to be aggressive about going and getting it. Finding that person that’s been there for 10 years, and say, ‘let me watch you do your job. Let me listen to you.’ Then go out and do some research so you know the trends that impact the client’s business. What are the choices and decisions that they could make? Why is this decision better than that decision? If you do the work and do some homework on this, you can get really good really fast.

Most salespeople won’t ever even know that there is a level 4. They’ve watched other people sell, they’ve talked about the product and talked about their company. They’ve been handed a slide deck where the first 8 slides are all about their company’s history and how great they are. They think that should be enough to win a deal but it’s not enough to cause people to change. It isn’t going to differentiate you in a meaningful way to talk about your company. You have to have something more than that, but they can get it rather quickly. If they work hard at it.

Jeremey: I like your theory about if they get stuck there, it can be a lack of confidence. Get stuck at your level 2, that is, which I interpreted as service or experience.

Jeremey: The framework that you have for being a level 4 seller… I want to put an exclamation mark on it because it was something that I thought was extremely valuable. How do you tell that story about value? That framework had three pieces: trends, implications, and advice. Can you give an example of how people would actually build that story?

Anthony: That’s what I hope that did with a book in chapter 2, Capturing Mindshare. I’ve got a framework in there for thinking about how do you research what trends are going to impact your client. It starts with why should they change. It’s different than starting with why we’re really good company and you should trust us with your business. The difference is stark.

So when you come in and say, for example, in staffing 11,000 baby boomers retire every day in the United States. That’s 4.3 million people a year retiring. There are 200,000 people being hired each month and that leaves the gap of 138,000 people each month. That is why, right now, there are 2 million more jobs open than the number of people on unemployment. Which means it’s going to be more difficult to find people. They’re going to be younger; they’re not going to have the experience.

The implications are, you’re going to have to work a lot harder to find a value prop that meets the Millennials’ and Gen Z’s demands for what a good workplace looks like. You’re probably going to have to have a training and development program to get them up to speed because the 67-year-old guy that’s been in this role for 35 years isn’t going to be here to train them and teach them. You’re not going to be hiring people that know how to do this in the same way that the previous group of people did.

So, there’s a reason to change. There’s an implication for not doing something. Stack five or six trends together to say, ‘Generally, this is the direction that things are going and this is why you should be changing and doing something different now rather than waiting for something bad to happen.’ Again, you can’t be a trusted advisor if you show up after people get hurt and say ‘You should have done something about that. Why’d you let yourself get hurt?’  If you’re the trusted advisor, you have to have that conversation before that. You’re looking at trends; you’re looking at implications. You’re looking at ‘how do I get them to take action and to do something about it before something bad happens?’

Some people actually have to have the heart attack before they decided to start eating vegetables and you know, getting a little exercise. The more you can stack these things up, the more compelling you can be.