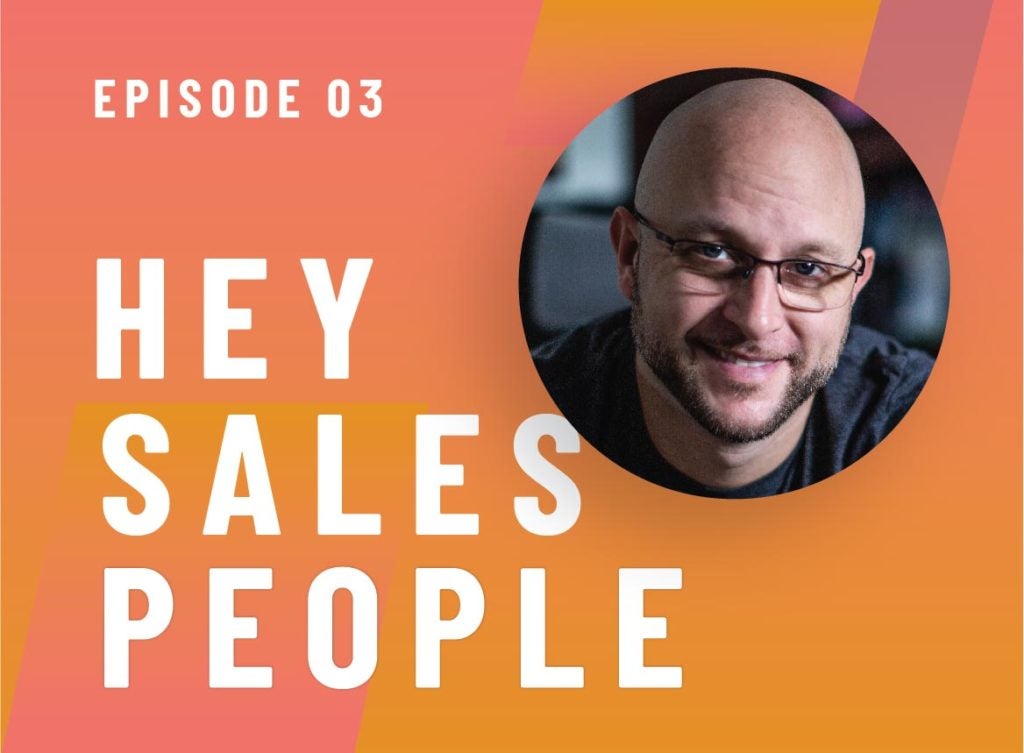 Have you checked out the Hey Salespeople podcast is hosted by Salesloft’s VP of Sales Strategy and self-proclaimed sales nerd, Jeremey Donovan? What are you waiting for?? 🙂

Episode three is with John Barrows, CEO of JBarrows.  Many in the sales community know John through the excellent sales advice he shares, but did you know that he began his sales career selling power tools? In this episode, Jeremey and John talk about how to NOT make your life harder and how to apply A/B testing to every aspect of your process.

While he is a sales trainer, John doesn’t beat around the bush about the good, the bad, and the ugly in sales.  He learned about relationship selling at Xerox and has carried it with him ever since. In order to be successful with relationship selling long term, you have to believe in what you sell and you have to understand how it will benefit a specific customer. 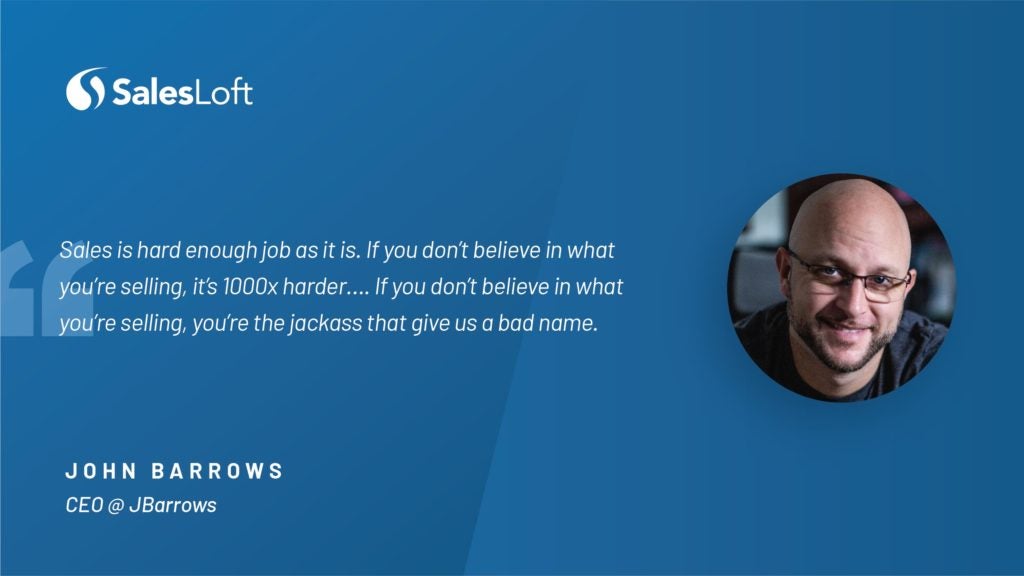 Listen to this episode for more insights into true sales success and for answers to questions like:

Jeremey: Welcome to the Hey Salespeople podcast where we focus on delivering immediately actionable best practices for sales professionals. I’m your host, Jeremey Donovan from Salesloft.

Today, it’s my pleasure to welcome our guest, John Barrows. He’s the CEO of J Barrows sales training. One of the things I love about John is that he is not just a trainer, he’s really a sales professional who happens to train. And we’ll get a little bit into what his background was as a sales professional and how he brings some of those learnings to what he does and what his company does. I also mentioned that John’s firm is a key strategic partner to Salesloft, he does train us and we do recommend him to many of our customers. John, welcome to the show.

John: Hey Jeremey, thanks for having me. I appreciate it.

Jeremey: I always start out with the same question. What is one of your favorite sales or leadership books of all time, and why?

John: I’m definitely more of a blog reader. That said, the few books that I do highly recommend one of them. It’s not necessarily a book on sales; it’s a book on psychology, I’m a big fan of understanding psychology and why people do the things the way they do them.

The one that I came across that has had a pretty significant impact on the way I look at things is Influence by Robert Cialdini. It’s a book on psychology and why we do the things the way that we do them. It’s all directly applicable to sales.

Jeremey: Yeah, I have read that book and deeply enjoyed it. He’s quite a dynamic speaker. I think he breaks down the principles, or all the influence techniques into a digestible, understandable format.

I also like to get a little bit of understanding of people by asking them, what’s the first thing you ever remember selling in your life?

I remember, when I was probably about eight or nine years old, those little tiny pumpkins you can buy at Halloween. I ended up buying a bunch of those for like a buck a pumpkin or whatever, then bringing them home and painting little cartoon figures on them. Like funny faces and stuff like that. I brought them to school and sold them to the kids for like five bucks a head.

I had a nice little thing going there until the teacher got me in trouble for selling stuff at school. That was the first time I kind of realized I could buy something for x, do a little bit to it, and then sell it for a while and make some money. So I could go out and buy the other stuff that I wanted, which was pretty cool.

Jeremey: It’s interesting that selling in school is considered to be a bad thing. And I don’t know that there are explicit rules against selling. In fact, so many schools have fundraisers where you’re selling.

John: Right? I think there are about 60 or 70 schools finally where you can actually get your degree in sales. Historically, it’s been kind of the default profession.

The and the whole concept is to get sales introduced to kids at an earlier age, so they started looking at sales as a true and genuine profession. Because no kid when asked, ‘hey, what do you want to be when you grow up?’ says ‘I want to be in sales.’ I’m trying to change that. So I’m pretty excited. That is coming out in September – keep an eye out for it.

Jeremey: I mentioned that I very much view you as a sales professional who trains as opposed to a sales trainer. I’d love to start at the beginning and understand what you learned about engaging prospects. It looks like you started your career out as sales, an event marketing specialist at Black & Decker; was that your first job out of school?

You got a Dodge Ram pickup truck and a bed full of tools. You were sitting in a region with like five or six other sales reps and a manager and your job was to just blanket the entire region. Find all the job sites, all the construction workers, and demo tools all day long to get them to buy. It was sales, but it really wasn’t hardcore sales because there was no quota. Literally, what I would do is walk onto a job site and if somebody liked the tools, I’d say ‘Next time you buy tools, could you buy these instead of the those?’ And I’d leave. I had, there was no real responsibility, no accountability.

One of the things I definitely learned – here’s a story. I love power tools, I worked with power tools, but I wasn’t a construction worker. So what would happen was, we would come on to a job site and all the other reps would go straight to the ‘decision maker.’  But there was no time restraint on me, I could stay as long as I wanted to. So I would go on the job site and actually find construction workers who were beating the crap out of tools like I was selling, but they were using Makita or whatever. I’d walk up to them and say, ‘Hey, have you ever tried this version of that tool? Why don’t you try it out for a week or so and I’ll come back.’

I came back a week later, and they would educate me on why this tool was either better or worse, how it worked, the ergonomics of it. After I gather that information, then I would go to the Foreman and say, ‘Hey, I’ve been working with a bunch of your workers here and understanding their how they do things. They’re telling me that they have some frustrations with their existing tool line. I got their feedback; they really like this. What are your thoughts on that?’ The Foreman would say, ‘Wait a minute. You’re telling me that my workers are would be happier if I bought these instead?’

Jeremey: What you said is so insanely relevant to enterprise selling. There’s this whole question, should you come in low? Or should you start high? To your point, there’s never one right answer. In this instance, it’s basically when you start low, you gather all the information about what the challenges are with the current state. If you’re lucky, give them a little bit of a taste of what the future could be like. Then, when you ultimately do call on power, you’re coming in with real information. It’s super valuable for them to know what their people are struggling with.

John: There’s a whole trend right now going on in sales with design thinking. They’re applying design thinking to sales. Design thinking, for people who don’t know, is like Apple. Apple looks at the way you work. That’s why, for instance, the iPad is so intuitive. It’s the same thing in sales design thinking. For instance, if you want to sell to Walmart. Go to Walmart, walk the aisles, go through the checkout process, sign up for their newsletter, see how they market to you, and gather that insight. Then say, ‘I’ve learned about the workflows in your business. Now, here’s my thought process on how you can improve those with our solution.’

I went from Black and Decker to Xerox, where I got my formal sales education. Talk about selling a commodity. Copiers are about as commodity as it comes. I also sold to the government. So it wasn’t even like I could negotiate on contract, my price is my price. That’s really where I learned relationship selling and design thinking, even though I was almost forced to do it.

At first, I was trying to do what every other sales rep at Xerox was doing, which was just go flip copiers. I’d walk in and they wouldn’t even want to look at me. I couldn’t just go in and sell a copier just because I was Xerox. Every day, I start at the top of the building and I would work my way down. I would sit there and meet with people, talk to them and understand their workflows, the layout of their office, and everything else.

Six months in, I wasn’t selling anything and my boss almost fired me. But I pushed back. I said, ‘Look, you brought me in here for a very specific reason. You gave me this territory that’s been burned to the ground, there’s no way these clients are going to buy from us if I don’t repair some of this trust that’s been fractured here. So let me do this.’

About nine months into that stint at Xerox, I went to their boss and reviewed their routines, their workflows. I showed how, if they transitioned to digital instead of analog, this is how much money they would save and how much more efficient they’d be. It was like taking candy from a baby you after that… because I had built the report and the relationships. I came to them with some insights that they weren’t aware of.

I remember walking into my boss’ office, dropping three huge contracts on this table, and saying, ‘See? Just let me do this and it’ll work out.’ That’s kind of where I learned relationship selling, learned how to build relationships and bring value to the client, even while selling a commodity.

It ultimately doesn’t matter what you sell. It matters what you believe about what you sell. That’s my number one recommendation when reps are looking for a job in sales. First and foremost, I say find out ‘What are your core values? What do you value as a human?’ Then I tell them to go find a company that mirrors those values and a product that you can believe in.

THERE’S A LOT MORE AFTER THIS! Listen to the full episode fo the rest of Jeremey’s conversation with John.

If you have a passion for the art and the science of sales, are looking to further your career, or just want to hear some great, practical tips, ‘Hey Salespeople’ is the podcast for you. Subscribe so you can follow along as he interviews the brightest minds in modern sales to bring you immediately actionable advice. Listen and subscribe here.