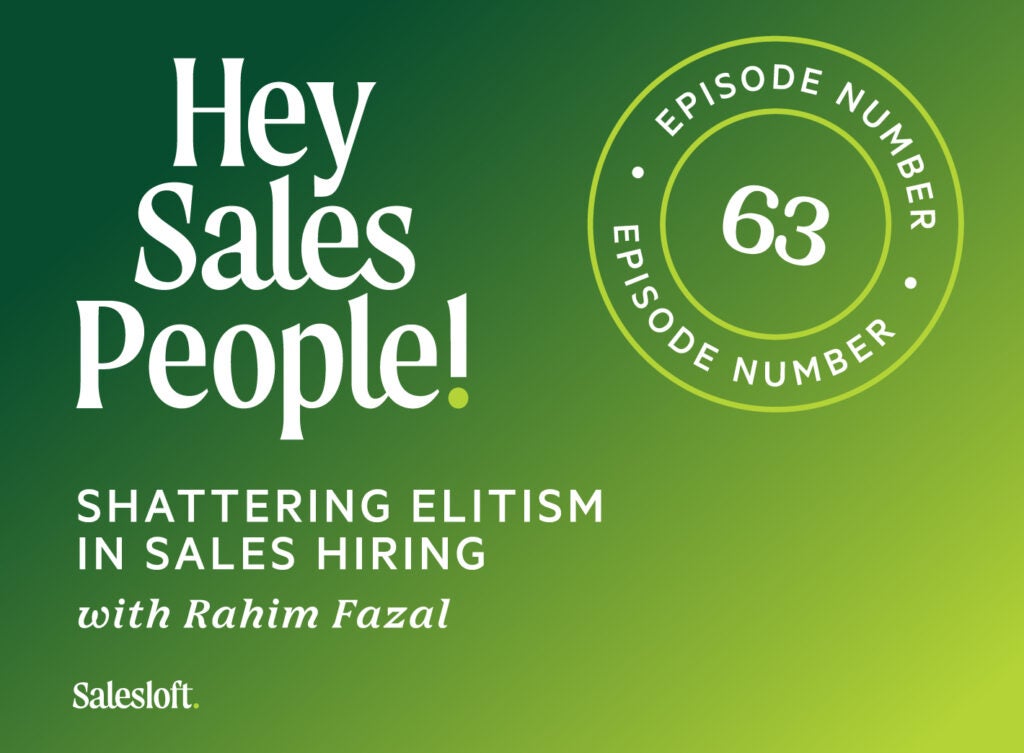 Rahim Fazal has a fascinating backstory: After being fired from McDonald’s, he and a friend started a business in high school and quickly sold it for millions.

Today as CEO of SV Academy, he’s a crusader for increasing diversity in how people get hired, trained, and developed into leadership positions.

He and Jeremey talk about whether Rahim regrets not getting an undergraduate degree, the importance of having access to mentors, and how leaders can begin to shatter the elitism that exists in hiring and people development. 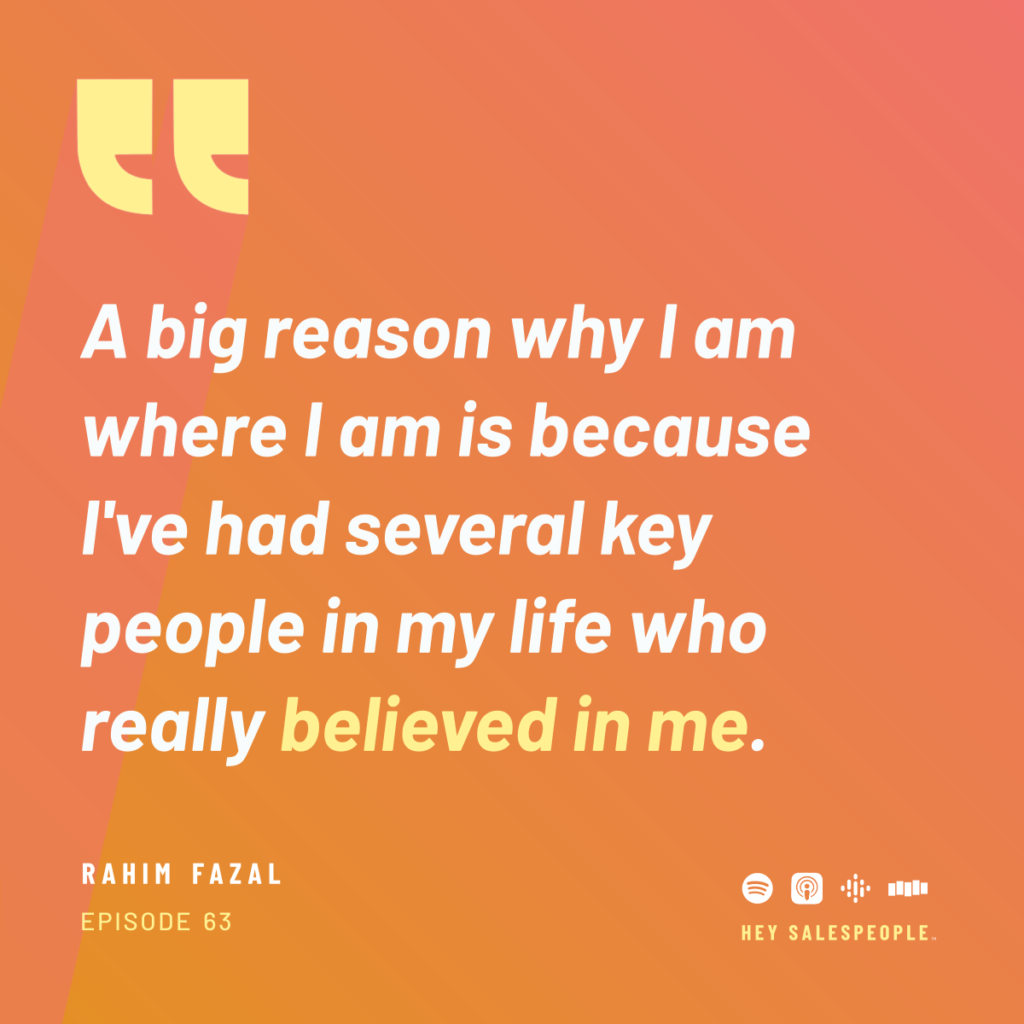 Listen here and read below for highlights from this episode:

Jeremey: I can’t help but ask this and I’m It was interesting that you didn’t mention this because your LinkedIn profile says it quite prominently that your self-styled title there includes the words McDonald’s crew member. Can you talk a little bit about when that happened and what that was like?

Rahim: Yeah, so I grew up in government housing, low-income family. I was, I was a good student, but always excited about, you know, making money selling, whether it was selling hockey cards at the flea market.

Or it was, you know, eventually getting my dream job at the time, which was selling fries and burgers at McDonald’s. And that was particularly interesting to me because I was able to make more money per hour than selling hockey cards. And also because all the girls in my class went to that McDonald’s and I could give them free food.

The problem with it was I wasn’t a great employee. And so about six weeks into the job, I ended up getting fired and was quite embarrassed by the whole thing because if you get fired by McDonald’s and Ronald McDonald, not give you a reference, it is very hard to get another job in your city.

Jeremey: I think it’s a good kind of that McDonald’s background is a good transition into this topic about hiring and hiring and developing leaders. I know you have a bit of a non-traditional career path. What did you know? What did you experience and or learn about that elitism as you progress through your career and we can start as early as you want? You know, when you got out of college, for example.

Rahim: Yeah, well, I’ll maybe spend a minute just telling you what happened after McDonald’s and then tell you, you know, what I’ve experienced more recently on the topic. So after getting fired from McDonald’s couldn’t get a job anywhere else.

And so my friend and I were in high school, my friend and I start to do different odd jobs. And we had friends asking us to help build a website for them, do some web hosting, sort of doing that for free, and then realize that there might be a business around it.

So we decided that we would, you know, outside of school hours, mostly try and build a little business that we had to hide entirely from our parents because there was a very strong immigrant mindset around the only way to achieve sort of, you know, financial security and to build a good life for yourself is to follow a very traditional path, which included doing well in high school and then jumping right into a four-year degree.

They didn’t quite care what four year degree was, or even what school it was, it was just important that you sort of made that jump and you took it seriously. And that didn’t seem that appealing at the time being 16. And so, started this little company, which ultimately took off in the junior and senior years of high school and we sold for a couple of million bucks without telling our parents a single thing. Like they did not know about this until the news came out in the paper.

And when that happened, I had sort of the confidence and some resources and a big head big ego at the time to say I’m not going to do it. I’m not going to go to University at the time, I said I didn’t see any value in it and, and decided to keep starting companies.

Jeremey: Do you have any regrets over having not earned an undergrad degree? Whether it’s experience or knowledge?

Rahim: Yeah, I think there are there are a couple of gaps that I’ve seen as I get older, I mean, my view on the value of a degree has shifted quite a bit since then. I see the value because of the gaps that I have. For example, I really rushed through my early to mid-20s.

I was working 6070 hours 80 hour weeks from the time I was 16, really, all the way up to recently and I don’t quite remember a lot of what happened at that time.

You know, I didn’t date that much because so always focused on selling and building the company and raising money and doing all of those things that you often do. And I also feel like when I look back at my life, a big reason why I am where I am is that I’ve had several key people in my life who really believed in me.

And part of the way that was manifested was in, you know, sort of serving as a coach where they challenged me and along the lines of, hey, here’s how you should be spending your time. And here are the some of the gaps that I’m noticing when I interact with you and having sort of a tight feedback loop with someone who was really in my corner, which changed by the way over time.

It wasn’t always the same person earlier on it was my parents and then it sort of evolved into other folks every sort of two or three years. But I think there was always someone in my life who was able to play that similar role.

Jeremey: Well, this does very much tie to our topic of, you know, elitism in the world of hiring of leadership and opportunity in general. Where do you see elitism a manifesting itself with respect to, you know, being able to find those people who can coach and guide you in your career?

Rahim: Well, let’s take it from the job seekers point of view, to begin with, I think, if you don’t have ready access, for example, if you didn’t grow up with a host of potential mentors, coming over to your house, sitting with your family for dinner, or, you know, folks you might meet at the golf course, on the weekend, it’s hard to even understand where you would start to go and meet someone.

And I think it sort of touches on a very human issue, which is, you know, we’d like to work with people, we like to sell to people, we like to buy from people, that we know. And so how do we sort of break out of these sort of insular sort of first and second-degree networks because for example, if you zoom out and you think about the topic of recruiting at a greater level, often, let’s say employers may only recruit at the same 10 schools year after year.

But at the same time as a student or a graduate soon to be, we’re finding in research that the school that you will ultimately end up at, or at least the category of school has been predetermined often much earlier in your life because of socioeconomics and other dimensions.

And so, a big part of what I think is important is helping employers understand the importance, not just at an emotional level, but really at a results level. That diversity results in strong outsized performance.

You can sort of think back to some of your best hires and think back to how you met those individuals, what their backgrounds were, and we all have those stories about that one person or those two people that sort of you met serendipitously who came from outside of your network, but for one reason or another sort of circumstances aligned such that you gave them a chance.

And they end up having sort of this transformative experience, not just for themselves, but also in your organization. Now, how do you multiply that 100 times, 1000 times, a million times, so that you’re really affecting systems change