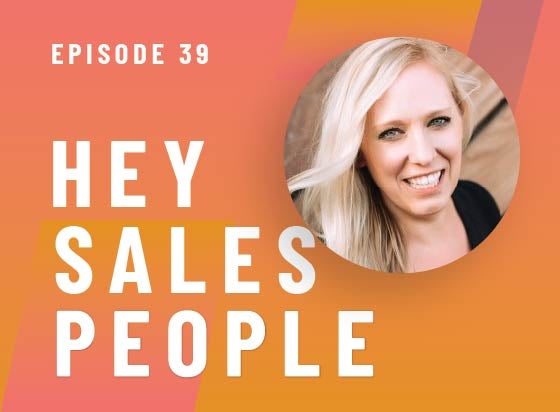 Catie Ivey is the Regional Vice President of Sales at Demandbase and has made her mark in the account-based marketing space.

Catie comes on the Hey Salespeople podcast to talk with Jeremey not about ABM, but about diversity in sales. The two discuss the data-backed benefits of a diverse workplace, common misconceptions, and actionable advice for women in sales.

Make sure to catch Catie’s unique perspective on mentorship and her tips on everything from filler words to body language. 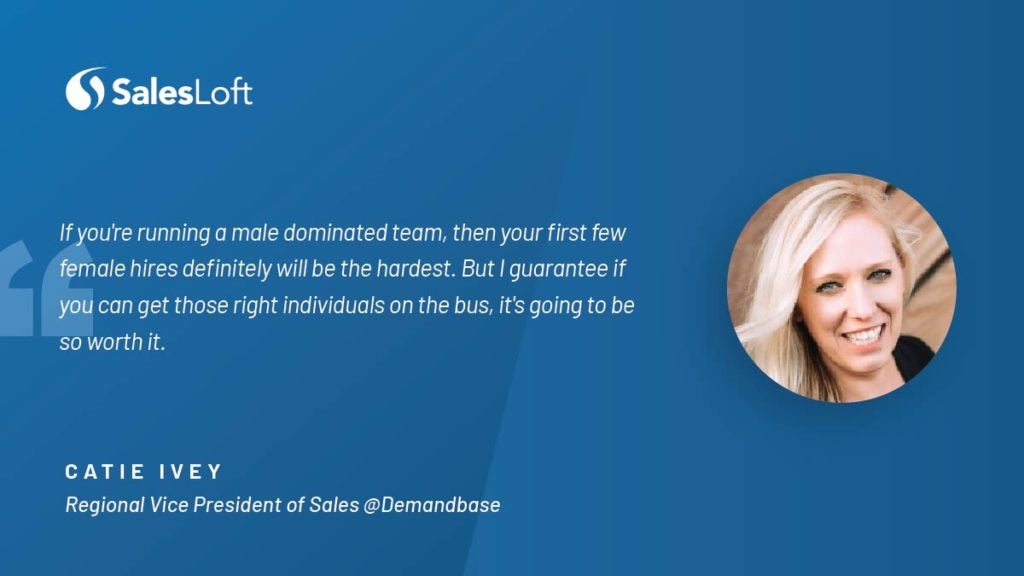 Jeremey: One of the things I remember reading a while back was that women are held to a much higher standard of elocution of the way that they speak then that of males in sales. Is that something that you find is the case?

Catie: Yes. It’s super interesting that you brought that up. It’s one of the pieces that I had planned on talking about a little bit further on in our conversation.

One of the things I work with gals that join my team, especially if they’re early on in their career, are things like filler words.

I agree 100% that there’s this perception or concept that it’s a little bit easier for a female to sound unintelligent. So, words like “uh, um, like”  have that valley girl sort of tone. I agree with you.

I haven’t read this study that you’re describing. Now, I’m very interested. I’m going to Google it after this conversation.

I definitely think that there is just a different bar or standard that’s really important for females in particular when you think about dictation and dialects, and just the pace and tone at which we speak for sure.

Why are there Fewer Women in Sales?

Jeremey: In sales, I think women represent somewhere between 30% to 40%, maybe 35%.  I’m just ballpark guessing, based on some things that I’ve read. Why do you think in sales, in particular,  that women have not yet reached 50%?

Catie:  I will give the caveat, I think we’ve come a long way. I’m so so optimistic about the future of our profession, but for me, I do think that it starts at the top.

I love that you lead with some of the stats from the McKinsey study. There was a study that came out, I think it was 2014 or 2015. It was based around the largest companies in the valley and Silicon Valley. They looked at 150 to 200 companies.

The statistic that stands out, and it’s literally burned in my brain because I’ve spoken about this subject so much, is that 11.7% of Senior Sales Executives within those companies are female.

Then, if they took it up another level as well and looked just at the biggest 15 companies in Silicon Valley… of those companies, only one woman ever held the position of a top sales executive.

So think Chief Sales Officer…1 out of 15.

Obviously, that’s just one study, and we’re looking just at a subset there with Silicon Valley. However, even if you change the vantage point, if you look at something like public companies that make up a board of public companies, I think it’s 18% to 20% of board seats are held by females.

I think it starts at the top, and we’re not going to see  50/50 splits until we see the evolution and a shift when we think of sales leadership, and particularly executive sales leadership.