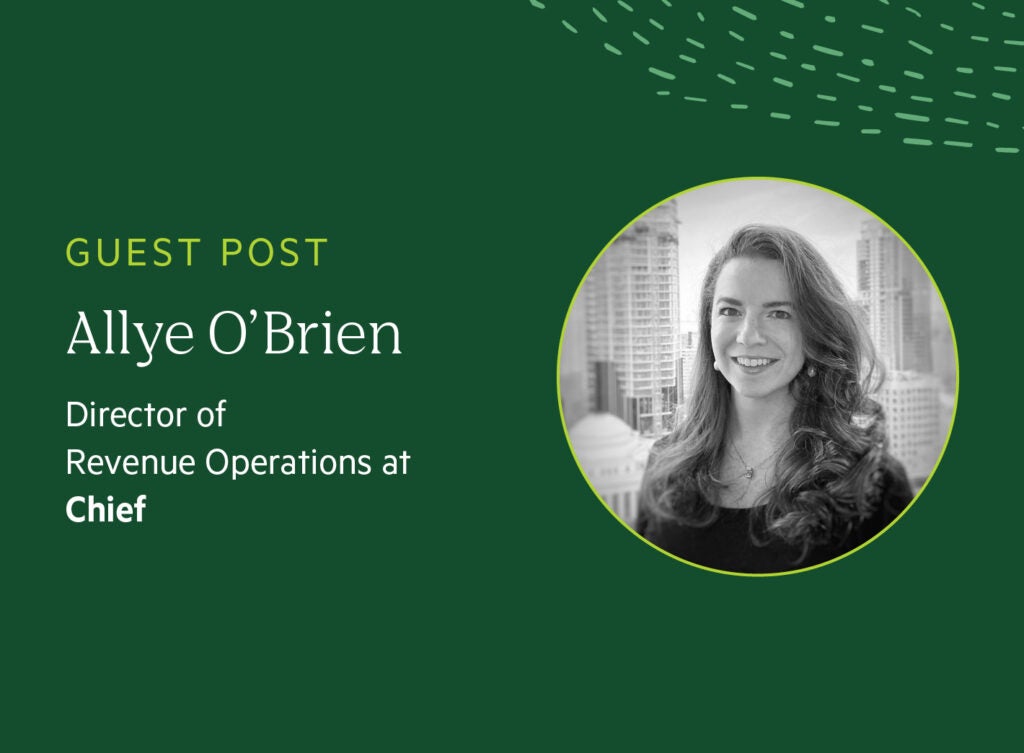 Guest post by Allye O’Brien. Allye found her true calling in designing and implementing processes for Revenue Organization and is now the Director of Sales Operations at Chief, a private network focused on connecting and supporting women leaders.

I’ve implemented Salesloft four times in four different roles. In the course of all this configuring, I realized that I’m crazy about dissecting data to understand how things work. How crazy? Well, I decided to leave sales and become a RevOps leader to build the process I would have wanted to use as a sales manager.

In my new role as Director of Revenue Operations at Chief, I joined an organization that’s just over a year old. We’re a private network focused on connecting and supporting women leaders, and my mandate is to build a membership process that can grow with us.

I need to ensure all of our external tools and systems are running smoothly so that we can offer a boutique, customized experience for potential members and members alike.

But, even the best attempts to create any process are futile without quality data. Asking teams to deliver a white glove experience with bad data is like asking a Michelin star chef to create a gourmet meal out of dog food. And while I’m absolutely obsessed with dogs, I won’t be taste-testing kibble any time soon.

Without high data quality, you can’t make sense of what you’re seeing. You can’t dig into reports or analytics to find the source of a problem. But with quality data, you can move beyond surface-level analysis and uncover much more than you’d expect.

In one of my previous management roles, the SDR team wasn’t succeeding with opportunity creation. Our conversion rate from lead to opportunity was low and we couldn’t figure out why.

So, we started looking into the data — the calls each person was making, the emails they were sending, how many leads they were reaching out to — and realized we thought we were contacting way more people than we actually were.

So, of course, our conversion rates were going to be lower because we weren’t doing the activity necessary to meet our numbers. And once we were able to check on a person-by-person basis as to what reps were accomplishing during the day, we increased our capacity for activity and drove more opportunity.

But none of that would have been possible to assess and fix without data quality measures in place.

In my latest RevOps role, data quality has become even more important to me. Without it, I can’t provide the right insight for leadership to act upon.

When I think of poor data quality, here’s what comes to mind:

Frequently in my career, I’ve gotten requests to add excessive fields to a report or to get really in the weeds on numbers. But managers have to start asking themselves, why do I need that level of granularity? You may think you do, but you don’t actually need it because there’s not a thing you can do with it.

Here’s a related example. I really encourage the team I support not to look at data for the past year to date, but instead look at it for the last two quarters.

Leaders need to ensure they’re constantly adjusting their data timeframe to make sure it’s accurate and relevant to what they’re currently trying to understand. This advice is now more applicable than ever given the disruption that COVID has wrought across global  sales cycles.

When I was a sales manager (and even now) what mattered most was the process score in Salesloft.

In other words, beyond just doing enough activity, is the rep being effective by doing the right activity at the right time?

Any time I’ve tracked this metric, the reps with the highest process score achieved regular quota attainment. In fact, at my last job, the three people who were always at or above 80% have been promoted since I left. So, there’s a direct correlation between rep effectiveness and hitting that process score. It was, and will continue to be, the most effective measure of success for me and my entire team.

How to Work With the Process Score

Forget daily calls and emails. Set KPIs that matter and make sense, like daily limits, process scores, and talk times. Those are the levers that your team can push in a meaningful way.

As a sales manager, work with your RevOps team to find the magic number of activities your reps need to complete each day.

Then, for cadences, set a daily people target (a daily limit of how many people you want reps to add to a cadence). And, also determine what activities make up the cadences reps will use.

As long as reps are adding the allocated number of leads per day per cadence and maintaining an 80% process score, everyone will hit quota. And because you’ve predetermined the correct amount of activity, you’re no longer hounding reps to make an arbitrary number of calls. It’s simply up to them to get their activities done and up to you to ensure that’s happening, using the data from their results to coach your team along the way.

Ultimately, you’re driving an SDR to become an AE. And you’re driving an AE to become a team lead, manager, or eventually a VP. So, taking away someone’s autonomy and ability to get their job done because you want them to make 75 calls a day doesn’t seem fair. And, why 75, by the way? I had reps who would call their mom just to make it to 75 calls. And what good is that doing?

By driving your team based on process score instead, reps will no longer take fruitless measures to achieve quota. Instead, they’re gaining wiggle room in their day for optimization or working on projects that contribute to the team.

That said, I believe that number of calls, emails, and reply rates are the most overrated metrics. Too many sales managers focus on these areas, but none are an indicator of success. It’s all about taking the right actions at the right time.

Sales Managers, Here’s How to Handle Reps Not Hitting Numbers

When I hire anyone, I’m looking for creativity first and foremost. When quota is on the line, you want reps who can come to the table with a solution. You want people on your team who can work autonomously.

But, when things don’t go according to plan, I first ask why.

Have I stopped having consistent one-on-ones with that rep? Have I moved their desk away from their friends because they were getting distracted, but now they’re getting disheartened?

Or, is there an external factor that’s preventing them from reaching their goals that I’m not considering? Maybe they just broke up with their partner (which, more often than not, has affected poor performance in the past).

Nine times out of 10, the reason a rep isn’t reaching goals is unrelated to their ability to get their job done.

Recently, in my last role, I approached a rep and said, “Hey, you’re not hitting the numbers that you used to be hitting. What’s going on?” And asking the question that way gave him space to open up. He told me he wasn’t in love with sales anymore.

So, I said, “Well, let’s find you a different job here.” We moved and promoted him to another team so he could do what he really loved. And all that led to a happier person and a better team member for another team.

But, people would be amazed at how often sales managers don’t simply ask reps why they’re failing. Instead, they ask, why did your calls go down? Or, why aren’t you reaching out to prospects like you used to? When they should be asking an open-ended question like, “Why isn’t this working anymore?”

Sales is a really hard job. When an SDR or AE has a bad month and doesn’t hit quota, it’s easy to go into a spiral. So, keeping that human element as a sales manager and asking why something isn’t going well goes much further than anything else.