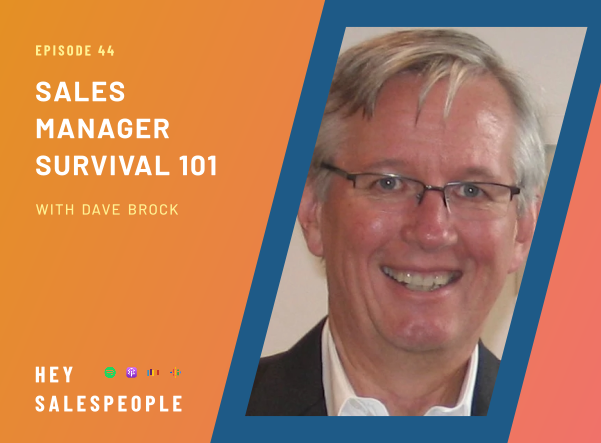 When it comes to the role of frontline sales manager, Dave Brock wrote the book… literally.

Dave is the CEO of Partners in EXCELLENCE as well as the author of Sales Manager Survival Guide. While new frontline sales managers often fixate on hitting a number, Dave suggests spending time getting to know the role, the team, and the company first.

Listen to this episode of Hey Salespeople to learn why Dave thinks the worst thing a new frontline sales manager can be is an excellent closer. 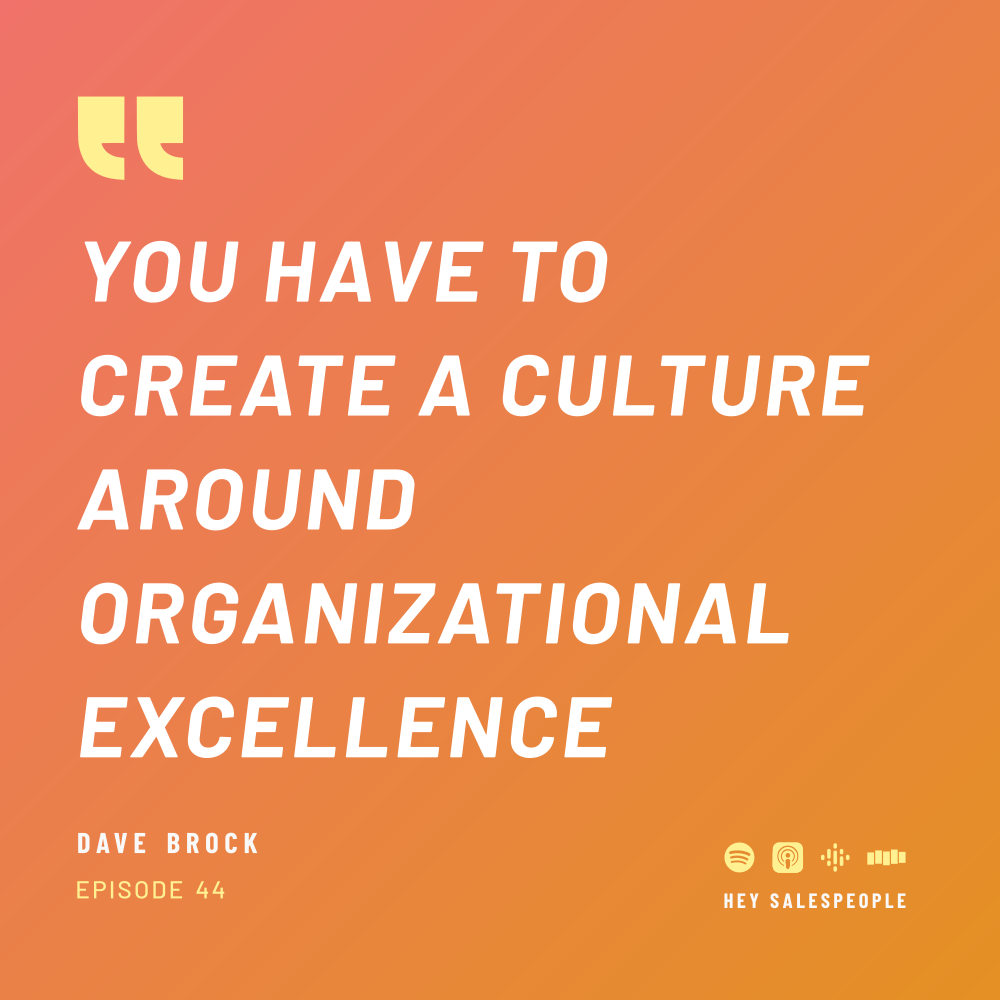 Setting Yourself Up for AE Success

Jeremey: Your odds of being successful as an AE are so much higher if let’s take the SaaS world if you were promoted from being an SDR.

And your odds of being a successful sales manager, I found, are so much higher if you’re promoted from an AE from within.

Have you seen that true for your first-line sales managers as well? Do you agree it’s much harder? And if so, like, how much harder is it to come in from the outside?

Dave: I see it kind of 50/50. If you look at it right now, there’s such mobility in salespeople and sales managers.

We see average tenure in the job for both salespeople and sales managers is 16 and a half months. So, we see a lot of situations where there’s a brand new sales manager– the first time in the role of a new company. They’ve found an opportunity. They interviewed for it. They got it and moved on.

So when you’re looking at being promoted within your own company, you have to realize that you have a change in relationship with the people that were your peers in the past. You now may be the manager.

I’m coaching a sales manager, a fairly new sales manager right now. And she’s had a terribly difficult time in that, all of the sudden, her former peers resent her being a manager. And they’re doing everything they can to make her fail.

There’s some sort of jealousy and that promotion wasn’t handled well by senior management. She had very little experience in how to do these things. And I think maybe did some things that weren’t what she would want to do now in hindsight.

So she really struggled in that role. And part of it was that change in I’m one of the team to now I’m your manager.

Jeremey: How did they handle it? And how should they have handled it if you’re giving advice to senior leaders who are promoting people from AE to first-line manager?

Dave: Basically, I’m being a little bit crass when I say it but it was, “Congratulations. You’re the manager of this team. Good luck, Godspeed. I need a forecast on Tuesday.” (laughter)

That was it. There are a whole bunch of things that were wrong there. And I find this wrong with a lot of brand new managers and even experienced managers going into new jobs is they don’t have a clear idea what their job is, you know?

One of my favorite quasi trick questions for my managers is, I say, “What’s your job?” and classically, they say “Making the number,” and I say, “Well, no, that’s not your job. That’s your peoples’ job. Your job as a front line manager is to maximize the performance of your people.

Moving into that first management job is really challenging. And too many times senior managers don’t help these new managers in making that transition because they don’t clearly define what the role is. They don’t say you’ve changed from being an individual contributor and this is now what this role means. They don’t coach and develop those people.

Jeremey: Let’s say you’ve got eight reps on your team, right, which is a typical span of control in the B2B world.

How do you practically keep track of what is it that each person is working on? How do I ensure that they’re making progress on those things? Like, there are so many ways, but what have you found is an effective way of tracking that?

People can’t change a lot of things at one time, you have to figure out what’s the thing that I can work on with you that provides the biggest leverage on your performance right now. And keep focusing on working with them on that. If you choose the right thing, what you actually end up doing is you end up its kind of like a bowling alley.

It’s looking at the headpin. If I hit that headpin, I knock down all the pins behind it. And so if I choose the right thing, I get a huge amount of leverage on performance.